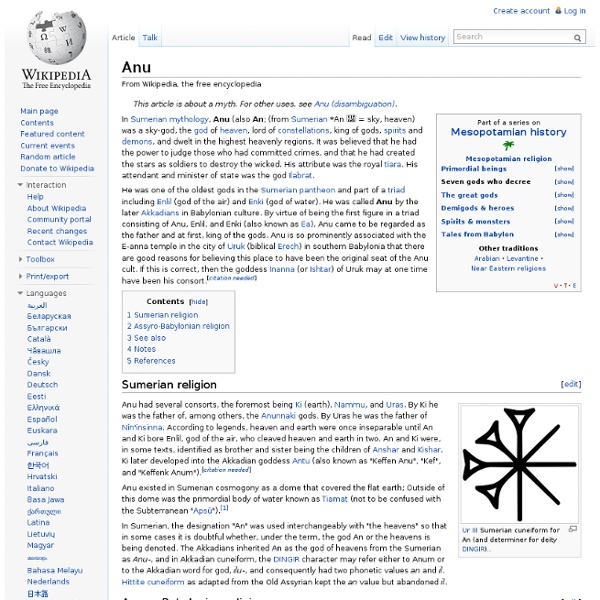 In Sumerian mythology, Anu (also An; from Sumerian *An 𒀭 = sky, heaven) was a sky-god, the god of heaven, lord of constellations, king of gods, spirits and demons, and dwelt in the highest heavenly regions. It was believed that he had the power to judge those who had committed crimes, and that he had created the stars as soldiers to destroy the wicked. His attribute was the royal tiara. His attendant and minister of state was the god Ilabrat. Sumerian religion[edit] Ur III Sumerian cuneiform for An(and determinative sign for deities see: DINGIR) Anu existed in Sumerian cosmogony as a dome that covered the flat earth; Outside of this dome was the primordial body of water known as Tiamat (not to be confused with the subterranean Abzu).[1] In Sumerian, the designation "An" was used interchangeably with "the heavens" so that in some cases it is doubtful whether, under the term, the god An or the heavens is being denoted. Assyro-Babylonian religion[edit] See also[edit] Notes[edit]

Nibiru (Babylonian astronomy) Nibiru (also transliterated Neberu, Nebiru) is a term in the Akkadian language, translating to "crossing" or "point of transition", especially of rivers,[1] i.e. river crossings or ferry-boats. In Babylonian astronomy, Nibiru (in cuneiform spelled dné-bé-ru or MULni-bi-rum) is a term of the highest point of the ecliptic, i.e. the point of summer solstice, and its associated constellation. As the highest point in the paths of the planets, Nibiru was considered the seat of the summus deus who pastures the stars like sheep, in Babylon identified with Marduk. Amun "Amen Ra" redirects here. For the Belgian band, see Amenra. Amun (also Amon (/ˈɑːmən/), Amen; Ancient Greek: Ἄμμων Ámmōn, Ἅμμων Hámmōn) was a major Egyptian deity.

ishtar Boudicca Andarta January, 2011 January 2nd: The Birth of the Goddess Inanna/Ishtar in Ancient Sumeria “Isis, Astarte, Deanna, Hecate, Demeter, Kali, Inanna…” Who is this Goddess? Inanna and Ishtar are essentially two sides of the same coin. Great conjunction A Great Conjunction is a conjunction of the planets Jupiter and Saturn.[Note 1] The last Great Conjunction took place on May 31, 2000, while the next one will be in late December 2020. Great Conjunctions take place regularly, every 18–20 years, as a result of the combined ~12-year orbital period of Jupiter around the Sun, and Saturn's ~30-year orbital period. The 2000 conjunction fell within mere weeks after both had passed conjunction with the Sun, and it was very difficult to observe without visual aid because the two planets rose only 30–45 minutes before sunrise, depending upon the location of the observer. Greatest conjunction[edit] Greatest conjunction is a conjunction of Jupiter and Saturn at or near their opposition to the Sun.

Ahura Mazda Ahura Mazda (/əˌhʊrəˌmæzdə/;[1]), (also known as Ohrmazd, Ahuramazda, Hourmazd, Hormazd, and Hurmuz, Lord or simply as spirit) is the Avestan name for a higher spirit of the Old Iranian religion who was proclaimed as the uncreated spirit by Zoroaster, the founder of Zoroastrianism. Ahura Mazda is described as the highest spirit of worship in Zoroastrianism, along with being the first and most frequently invoked spirit in the Yasna. The literal meaning of the word Ahura means light and Mazda means wisdom. Ahura Mazda first appeared in the Achaemenid period (c. 550 – 330 BCE) under Darius I's Behistun Inscription. Until Artaxerxes II (405–04 to 359–58 BCE), Ahura Mazda was worshiped and invoked alone. With Artaxerxes II, Ahura Mazda was invoked in a triad, with Mithra and Apam Napat.

Pagan Regeneration: Chapter III: Dionysian Excesses Sacred Texts Classics Index Previous Next Buy this Book at Amazon.com Pagan Regeneration, by Harold R. Johannes Kepler Johannes Kepler (German: [ˈkʰɛplɐ]; December 27, 1571 – November 15, 1630) was a German mathematician, astronomer, and astrologer. A key figure in the 17th century scientific revolution, he is best known for his laws of planetary motion, based on his works Astronomia nova, Harmonices Mundi, and Epitome of Copernican Astronomy. These works also provided one of the foundations for Isaac Newton's theory of universal gravitation. Zeus Name The Chariot of Zeus, from an 1879 Stories from the Greek Tragedians by Alfred Church. The god's name in the nominative is Ζεύς Zeús /zdeús/. It is inflected as follows: vocative: Ζεῦ / Zeû; accusative: Δία / Día; genitive: Διός / Diós; dative: Διί / Dií.

Who Are The Wiccan Goddesses A great many of our Wiccan Goddesses and Gods in fact come from the Roman/Greek pantheon. It's ironic that a religion like Wicca, whose forerunner was destroyed by the Romans, has claimed the conquerors' gods for itself. Nonetheless, the Roman pantheon fills out the family of divinities quite well. Probably because the Romans borrowed so many deities from other cultures too. And since the Romans were technically pagans too, I guess it makes some sense. We also take many Pagan Goddess names from the Celtic and the Egyptian religions.

Summing-up the Amaranth - Elder Scrolls Lore A ghost is on the forum ; the 6 month and 13 threads long Amaranth discussion. Those who participated to it since the begining have more or less a good idea of the conclusions drawn, but most of the people on the lore forum don't. Now, it is done ; the answer (raising more questions than before) has been given as Toesock birthday present :