Syria oil map: the journey of a barrel of Isis oil 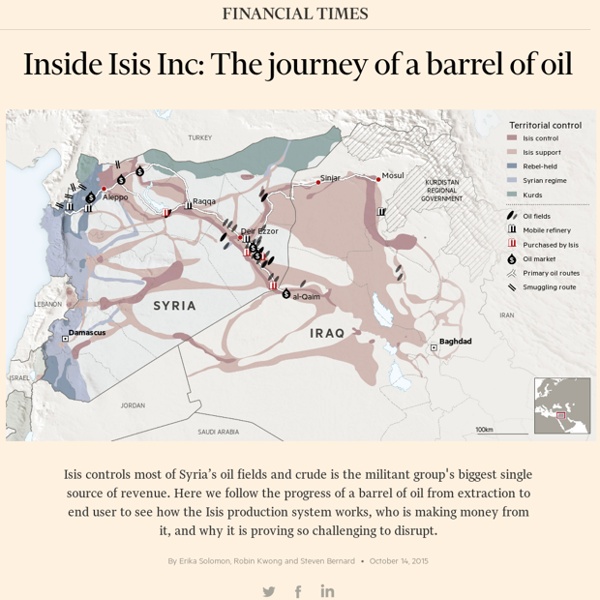 Kurdistan Regional Government Isis controls most of Syria’s oil fields and crude is the militant group's biggest single source of revenue. Here we follow the progress of a barrel of oil from extraction to end user to see how the Isis production system works, who is making money from it, and why it is proving so challenging to disrupt. By Erika Solomon, Robin Kwong and Steven Bernard•October 14, 2015 Where the oil is extracted Isis’s main oil producing region is in Syria’s eastern Deir Ezzor province, where production is somewhere between 34,000 to 40,000 barrels a day, according to locals. It is difficult to determine a definitive oil production figure for Isis-controlled areas. The price of the oil depends on its quality. Selling crude oil The group sells most of its crude directly to independent traders at the oil fields. Oil refineries Traders have several options after they pick up their cargo: Most traders prefer to sell the oil on immediately and return to queue at the fields. Mosul Boat

Western liberalism is no match for the Islamic Game of Thrones As a graduate student in the Harvard Government Department in the late 1980s, I became slightly jaded about the number of visiting professors who warned about the imminent demise of the West. The thrust of their arguments was nearly always the same. The secular liberal values we cherish, such as freedom of speech and the separation of church and state, won’t survive in the face of growing, religious disenchantment with modernity unless they’re rooted in something more meaningful than rational individualism. They were talking about Islamic Fundamentalism, obviously, although sometimes they threw in Christian Fundamentalism as well in order not to seem ‘Orientalist’ or ‘ethnocentric’.

Population, the elephant in the room Oil and its companion natural gas together make up about 60% of humanity's primary energy. In addition, the energy of oil has been leveraged through its use in the extraction and transport of coal as well as the construction and maintenance of hydro and nuclear generating facilities. Oil is as the heart of humanity's enormous energy economy as well as at the heart of its food supply. The following conclusion seems reasonable: Humanity's use of oil has quadrupled the Earth's carrying capacity since 1900.

U.S. general: Number of ISIS fighters in Libya doubles Gen. David Rodriguez, commander of U.S. Africa Command, said the intelligence community estimates the number of ISIS fighters in Libya at "around 4 to 6,000." He added that the number has "probably about doubled in the last 12 to 18 months, based on what their assessments were last year." Wracked by violence since the fall of Moammar Gadhafi in 2011, Libya has become a haven for militant groups. From 2014, the country was divided between two rival governments, one in the capitol of Tripoli and another in the east.

Damascus wants Russia to develop Syrian oil — RT Business Syrian authorities are hoping Russian companies will develop the country's offshore oil deposits, said Syrian Foreign Minister Walid Muallem during a meeting with Russian Deputy Prime Minister Dmitry Rogozin. "We have data that oil and gas deposits on a shelf off the coast of Syria have enormous potential. And we hope to see not only Russian warships in Syria, but also platforms for extracting oil,” Muallem said on Thursday.

Combined effects of the Pacific Decadal Oscillation and El Niño-Southern Oscillation on Global Land Dry–Wet Changes : Scientific Reports Figure 1 shows the winter mean sc_PDSI_pm for the El Niño composite and the sub-composites according to the PDO phase, together with the differences between in- and out-of-phase combinations, as indicated. The El Niño-related dry–wet changes result in drier conditions from southern and southeastern Asia to Australia (particularly along the eastern side of the country), central China, equatorial South America, the northern US, western and southern Canada, and the Sahel. Most other regions become wetter, particularly the central and southwestern US, northern Mexico, southern China, the southeastern coast of South America, the Horn of Africa, and the Mediterranean region toward central and southwestern Asia. Sub-composites with respect to the PDO phase reveal that the global El Niño-induced dry–wet changes are determined primarily by El Niño winters that occur during the warm phase of the PDO. (a) El Niño, (b) El Niño–warm PDO, and (c) El Niño–cold PDO.

ISIS Oil Trade Full Frontal: "Raqqa's Rockefellers", Bilal Erdogan, KRG Crude, And The Israel Connection "Effectively, we have been financially discriminated against for a long time. By early 2014, when we did not receive the budget, we decided we need to start thinking about independent oil sales” -- Ashti Hawrami, Kurdistan’s minister for natural resources In June of 2014, the SCF Altai (an oil tanker) arrived at Ashkelon port. Hours later, the first shipment of Kurdish pipeline oil was being unloaded in Israel. Eight Books Every Spiritual Seeker Should Read “You want weapons? Go to a library. Books are the best weapons in the world.” ~ Doctor Who We all know about the big spiritual doctrines: The Bible, The Koran, The Tibetan Book of the Dead, The Tao Te Ching, but there are other books that have the spiritual substance to split your heart wide open and cut your previously held perceptions to shreds with their sacred ruthlessness and transcendent magnanimity.

Carnage in US Natural Gas as Price Falls off the Chart All eyes are on Chesapeake. The price of natural gas in the US has gotten completely destroyed. The process started in July 2008, at over $13 per million Btu and continues through today, at $1.77 per million Btu. In between, natural gas traded at prices that, for much of the time, didn’t allow drillers to recoup their investments, leading to permanently cash-flow negative operations, and now huge write-offs and losses, defaults, restructurings, and bankruptcies. You’d think that this sort of financial misery would have caused investors to turn off the spigot, and for production to fall because drillers ran out of money before it got that far. The Many Challenges Facing ISIS in Libya ISIS according to several reports, has declared a call to arms across Libya, after it withdrew most of its forces from Derna and other cities in Libya to the main stronghold in the city of Sirte, due to the losses it suffered. Despite its retreat from positions in Libya due to the repeated strikes by the Libyan army, it does not mean that ISIS is not an established presence on the ground, as they have attempted a number of failed operations very recently. For instance, an attack by a number of armed men to take control of the port of “El Berika”, an oil port on the 23rd of April 2016, resulted in the killing of 30 terrorists at least. This has highlighted the challenges that ISIS is facing in Libya.

Mysterious Middleman: Who is Buying ISIS's Crude and Dropping Oil Prices? Who is the commodity trader buying ISIS's crude? And is the sharp oil price fall the result of the Islamic State's successful oil trade, Tyler Durden asks. Incredibly, it has taken over a year for the US-led anti-ISIS coalition to recognize that the Islamic State's funding is significantly dependent on crude, extracted by ISIS from captured oil wells, anonymous analyst for the financial website Zero Hedge Tyler Durden underscores. "Still, without a doubt, the dominant source of funds for the terrorists is oil, and not just oil, but a well-greased logistical machine that keeps thousands of barrels moving from unknown pumps to even refineries, and ultimately to smugglers who operated out of Turkey and other countries," Durden wrote in his recent piece. But what is even more curious, is that Pentagon officials admitted that for more than a year they deliberately avoided targeting tanker trucks under the pretext of possible civilian casualties.

A Compendium of Useful Information for the Practical Man/Camping and Hiking The Camp Sheet[edit] From time to time in this department I have mentioned an oiled muslin sheet for the camp outfit. In the first place it should be made with the idea of accommodating itself to the usages of a two man camp, because more often two go together than one alone; or more than two in company, unless it is a regular party camp, which is usually fully equipped. For two men you should buy a piece of sheeting such as is used in making ordinary bed sheets.

The nine planetary boundaries Stratospheric ozone depletionThe stratospheric ozone layer in the atmosphere filters out ultraviolet (UV) radiation from the sun. If this layer decreases, increasing amounts of UV radiation will reach ground level. This can cause a higher incidence of skin cancer in humans as well as damage to terrestrial and marine biological systems. The appearance of the Antarctic ozone hole was proof that increased concentrations of anthropogenic ozone-depleting chemical substances, interacting with polar stratospheric clouds, had passed a threshold and moved the Antarctic stratosphere into a new regime. Fortunately, because of the actions taken as a result of the Montreal Protocol, we appear to be on the path that will allow us to stay within this boundary. Climate ChangeRecent evidence suggests that the Earth, now passing 390 ppmv CO2 in the atmosphere, has already transgressed the planetary boundary and is approaching several Earth system thresholds.

Dear GOP, you really want to hurt ISIS? Get out of Big Oil's pocket Of course, none of this is particularly controversial. We’ve known for over a decade the insidious role of petroleum money in the funding of terror networks, including from supposed allies like Saudi Arabia. What is surprising about all of this is how resistant conservatives are to drying up this source of terrorist money. These are the people who have worked tirelessly to dry up liberal funding sources like labor unions and trial lawyers, yet when it comes to terrorism, they are working side-by-side to ensure the supremacy of Big Oil. But instead of doing ISIS’ bidding by keeping out Syrian widows and orphans, why not strike a blow against their biggest funding apparatus?