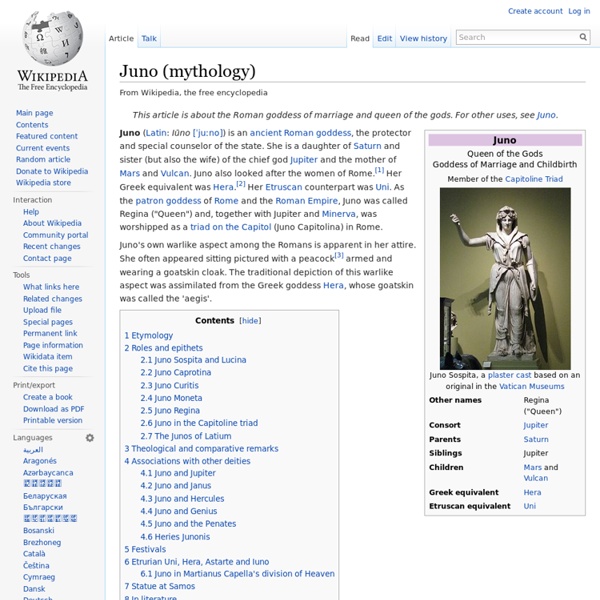 Juno's own warlike aspect among the Romans is apparent in her attire. She often appeared sitting pictured with a peacock[3] armed and wearing a goatskin cloak. The traditional depiction of this warlike aspect was assimilated from the Greek goddess Hera, whose goatskin was called the 'aegis'. The name Juno was also once thought to be connected to Iove (Jove), originally as Diuno and Diove from *Diovona.[4] At the beginning of the 20th century, a derivation was proposed from iuven- (as in Latin iuvenis, "youth"), through a syncopated form iūn- (as in iūnix, "heifer", and iūnior, "younger"). This etymology became widely accepted after it was endorsed by Georg Wissowa.[5] Juno's theology is one of the most complex and disputed issues in Roman religion. Juno is certainly the divine protectress of the community, who shows both a sovereign and a fertility character, often associated with a military one. A temple to Iuno Sospita was vowed by consul C. Juno. G. However in 1882 R. M.

Statue of Liberty as ISIS Statue of LibertySymbols [Mithras. Greek Hecate, Egyptian Isis, Babylonian God Ishtar and Semiramis, wife of Nimrod, with Light/flame.] Talisman by Graham Hancock and Robert Bauval shows this goddess is actually the Egyptian Isis Helios, Greek god of the sun. Origin of the names of the days The names of the days are in some cases derived from Teutonic deities or, such as in Romance languages, from Roman deities. The early Romans, around the first century, used Saturday as the first day of the week. As the worshipping of the Sun increased, the Sun's day (Sunday) advanced from position of the second day to the first day of the week (and saturday became the seventh day). Sunday The name comes from the Latin dies solis, meaning "sun's day": the name of a pagan Roman holiday. It is also called Dominica (Latin), the Day of God. The Romance languages, languages derived from the ancient Latin language (such as French, Spanish, and Italian), retain the root.

Origin of the names of the months Only a few names of the month were derived from Roman deities. Most simply came from the numbers of the months or -- in two cases -- in honor of Roman emperors. January Named after the Roman god of beginnings and endings Janus (the month Januarius). February The name comes either from the old-Italian god Februus or else from februa, signifying the festivals of purification celebrated in Rome during this month. March This is the first month of the Roman year. Columbia "Columbia" (/kəˈlʌmbiə/; kə-LUM-bee-ə) is a historical and poetic name used for the United States of America and also as one of the names of its female personification. It has given rise to the names of many persons, places, objects, institutions, and companies; e.g., Columbia University, the District of Columbia (the national capital), and the ship Columbia Rediviva, which would give its name to the Columbia River. Images of the Statue of Liberty largely displaced Columbia as the female symbol of the U.S. by around 1920.[1] Columbia is a New Latin toponym, in use since the 1730s for the Thirteen Colonies. It originated from the name of Christopher Columbus and from the ending -ia, common in Latin names of countries (paralleling Britannia, Gallia etc.).

Roman Food Facts: What Did the Romans Eat? The Romans ate a varied diet consisting of vegetables, meat and fish. The poorest Romans ate quite simple meals, but the rich were used to eating a wide range of dishes using produce from all over the Roman Empire. Romans typically ate three meals a day – breakfast (ientaculum), lunch (prandium) and dinner (cena). Cena was the main meal. The Hidden Meaning of Britannia - as ISIS the Goddess According to the Royal Mint, only one in four British adults recognize the figure of Britannia. The iconic figure has been an important symbol in the story of Britain and has consistently featured on gold coins since Roman times. Until 2008, she consistently appeared on the 50p coin. However, it seems the majority of British patrons do not know who Britannia is. In order to raise awareness of what Britannia stands for, the Royal Mint recruited human statues to stand in the streets of London, Cardiff and Glasgow and tell passersby the story of Britannia. The project will be visiting other cities across the UK in the coming months.

Mystery of the Iniquity Lord of Sirius!… it is He Who is the Lord of Sirius. (Qur’an, 53: 49) The fact that the Arabic word “shiaara,” the equivalent of the star Sirius, appears only in Surat an-Najm, meaning only “star,” 49 is particularly striking. Ancient Rome Unit Study and Timeline by Cindy Downes - Oklahoma Homeschool This unit is ©Copyright 2004-2010 by Cindy Downes. All rights reserved. Permission is given to homeschooling parents and classroom teachers to use these units free of charge in their own homeschool or classroom only. These units may not be reprinted or distributed in any form, for any purpose (commercial or otherwise) without permission from Cindy Downes.

Capitoline Triad The Capitoline Triad[edit] Capitolium[edit] Another shrine (sacellum) dedicated to Jupiter, Juno Regina and Minerva was the Capitolium Vetus on the Quirinal Hill. It was thought to be older than the more famous temple of Jupiter Optimus Maximus on the Capitoline Hill, and was still a landmark in Martial's time, in the late 1st century.[4] Hadrian's Wall dig unearths Roman refugee camp A major dig close to Hadrian's Wall has revealed traces of a suspected refugee camp which would have housed tribespeople fleeing south from a breakdown of society north of the imperial border in the third century AD. Archaeologists were initially puzzled to unearth the foundations of temporary but well-built structures on the site of an earlier fort within the sprawling perimeter of the Roman fortress of Vindolanda. The director of excavations at the site, Dr Andrew Birley, said: "These are very unusual buildings and it looks as though they may number into the hundreds. Events clearly took place here on a large scale to lead to this sort of construction." Records for the garrison at the "white field" between Hexham and Haltwhistle in Northumberland do not suggest Roman troop reinforcements needing so much space, with the invasion force mustering all along the wall.