40 Maps That Explain The Middle East 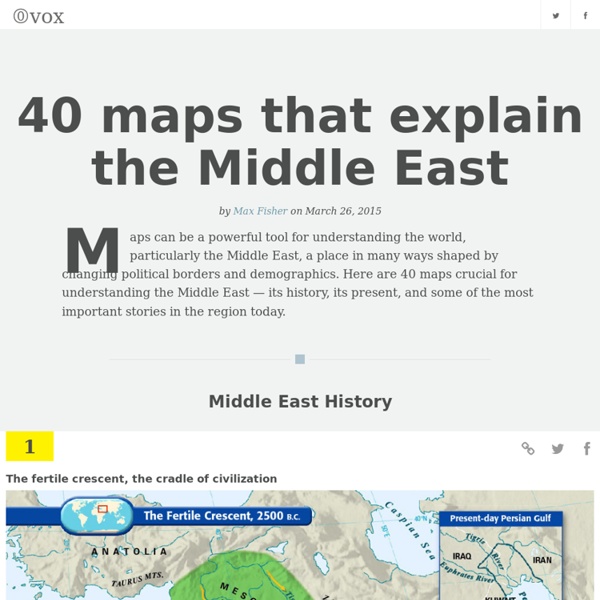 Maps can be a powerful tool for understanding the world, particularly the Middle East, a place in many ways shaped by changing political borders and demographics. Here are 40 maps crucial for understanding the Middle East — its history, its present, and some of the most important stories in the region today. Middle East History The fertile crescent, the cradle of civilization The fertile crescent, the cradle of civilizationIf this area wasn't the birthplace of human civilization, it was at least a birthplace of human civilization. Called "the fertile crescent" because of its lush soil, the "crescent" of land mostly includes modern-day Iraq, Syria, Jordan, and Israel-Palestine. (Some definitions also include the Nile River valley in Egypt.) The Middle East today The dialects of Arabic today The dialects of Arabic todayThis map shows the vast extent of the Arabic-speaking world and the linguistic diversity within it. Israel-Palestine Syria Iran Afghanistan Saudi Arabia and Oil Iraq and Libya

40 maps that explain the Roman Empire by Timothy B. Lee on August 19, 2014 Two thousand years ago, on August 19, 14 AD, Caesar Augustus died. He was Rome's first emperor, having won a civil war more than 40 years earlier that transformed the dysfunctional Roman Republic into an empire. List of Celtic tribes The spread of Celtic culture in Europe: core Hallstatt territory, by the 6th century BC maximal Celtic expansion, by the 3rd century BC Lusitanian area of Iberia where Celtic presence is uncertain Teaching With Uncertainty I’m not old enough to have taught or been a student during the height of the Cold War. I imagine, however, that teaching in our contemporary milieu of political polarization and anxiety about our country’s future and place in the world is quite similar to the paranoia and fear people experienced during the Cold War era. I believe that our students need us to acknowledge that their futures feel unstable and unclear. One way to do that is by teaching them to embrace a certain level of uncertainty and ambiguity in their learning. I’ve been thinking about this recently as my eighth-grade Global Thinking students have embarked on a unit on the Middle East.

What Does It Mean to Think Historically? Introduction When we started working on Teachers for a New Era, a Carnegie-sponsored initiative designed to strengthen teacher training, we thought we knew a thing or two about our discipline. As we began reading such works as Sam Wineburg's Historical Thinking and Other Unnatural Acts, however, we encountered an unexpected challenge.1 If our understandings of the past constituted a sort of craft knowledge, how could we distill and communicate habits of mind we and our colleagues had developed through years of apprenticeship, guild membership, and daily practice to university students so that they, in turn, could impart these habits in K–12 classrooms?

Linguistic imperialism: The world according to Putin WHEN Vladimir Putin justified his annexation of Crimea on the ground that he owed protection to Russian speakers everywhere, this newspaper took a dim view of his line of argument, pointing out that since linguistic borders do not match those of states, it would lead to chaos. We now recognise that this approach to international relations betrayed a deplorable conservatism. Since we pride ourselves on pushing the boundaries in search of a way to clamber out of the box and reach the summit of blue-sky thinking, we reckoned we should grasp the nettle of radical Putinism and run with it. We have, therefore, redrawn the world’s boundaries according to Mr Putin’s principles. We think readers will agree that the resulting map has considerable appeal.

The 3 Best Places To Find Free Historical Maps Online The Internet is a great place to do research, but when it comes to finding data about the past, it’s not always the best option. Many old records, such as maps, are not hosted in many locations. This may make you feel as if your only option is to head to the nearest big-city library and dive into their stacks, but there are a few online resources that provide a decent selection of historical maps. They’re great for amateur researchers and anyone interested in what people thought the world looked like in the past.

The Japan Times Online Biased history helps feed U.S. fascination with Pearl Harbor By CHARLES BURRESS Special to The Japan Times SAN FRANCISCO -- Why does America continue to nurture a deep preoccupation with Pearl Harbor, 60 years after the Japanese attack on the U.S. naval base in Hawaii? The makers of Disney's blockbuster $135 million film "Pearl Harbor" said the movie is primarily a love story, but its title, climax and cinematic heart are about the war and American heroism. The swell of attention caused by the film has died down now in America, and before it flares up again with the 60th anniversary of the attack in December, now may be a good time to look behind the patriotism at what causes these continued outbreaks of Pearl Harbor fever.

Language, Ethnicity, and Tradition in the Middle East A great tension exists between different ethnic groups in the Middle East. In South Asia, for example, Pashtuns, Punjabis, Sindhis, Hazaras, Tajiks, and other groups are in constant conflict. In 1988, this author went to a small Afghan hospital in Peshawar to visit one of my Afghan students who'd developed typhoid fever.