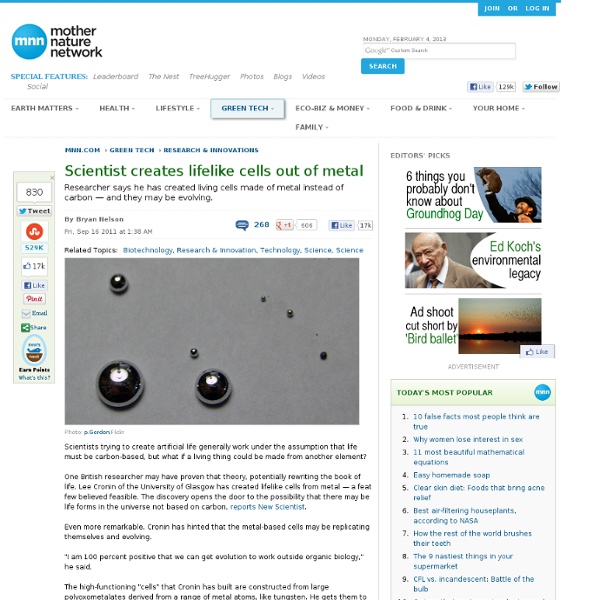 Scientists trying to create artificial life generally work under the assumption that life must be carbon-based, but what if a living thing could be made from another element? One British researcher may have proven that theory, potentially rewriting the book of life. Lee Cronin of the University of Glasgow has created lifelike cells from metal — a feat few believed feasible. The discovery opens the door to the possibility that there may be life forms in the universe not based on carbon, reports New Scientist. Even more remarkable, Cronin has hinted that the metal-based cells may be replicating themselves and evolving. "I am 100 percent positive that we can get evolution to work outside organic biology," he said. The high-functioning "cells" that Cronin has built are constructed from large polyoxometalates derived from a range of metal atoms, like tungsten. The metallic bubbles are certainly cell-like, but are they actually alive? The early results have been encouraging.

Future Computer by Jakub Záhoř & Yanko Design - StumbleUpon Future Touch Tech This concept computer-of-the-future by designer Jakub Záhoř allows the user to operate the device anywhere they can find a glass surface. The user simply attaches the central unit to any glass surface like a window or coffee table, switches on the power, and watches their system light up before their eyes. NASA Discovers New Life: Arsenic Bacteria With DNA Completely Alien To What We Know 2:57 PM ET Press Conference Has Ended NASA concludes the press conference by saying future discoveries could be on the horizon: "Science never sleeps." 2:55 PM ET Experiment Conducted In A Lab NASA explains how the experiment was conducted: "The newly discovered microbe, strain GFAJ-1, is a member of a common group of bacteria, the Gammaproteobacteria.

New system allows robots to continuously map their environment Robots could one day navigate through constantly changing surroundings with virtually no input from humans, thanks to a system that allows them to build and continuously update a three-dimensional map of their environment using a low-cost camera such as Microsoft’s Kinect. The system, being developed by researchers at MIT’s Computer Science and Artificial Intelligence Laboratory (CSAIL), could also allow blind people to make their way unaided through crowded buildings such as hospitals and shopping malls. To explore unknown environments, robots need to be able to map them as they move around — estimating the distance between themselves and nearby walls, for example — and to plan a route around any obstacles, says Maurice Fallon, a research scientist at CSAIL who is developing these systems alongside John J. Leonard, professor of mechanical and ocean engineering, and graduate student Hordur Johannsson.

Stem Cell Basics: Introduction Laboratory studies of stem cells enable scientists to learn about the cells’ essential properties and what makes them different from specialized cell types. Scientists are already using stem cells in the laboratory to screen new drugs and to develop model systems to study normal growth and identify the causes of birth defects. What would happen if I drilled a tunnel through the center of th& Want to really get away from it all? The farthest you can travel from home (and still remain on Earth) is about 7,900 miles (12,700 kilometers) straight down, but you'll have to journey the long way round to get there: 12,450 miles (20,036 kilometers) over land and sea. Why not take a shortcut, straight down? You can get there in about 42 minutes -- that's short enough for a long lunch, assuming you can avoid Mole Men, prehistoric reptiles and underworld denizens en route. Granted, most Americans would end up in the Indian Ocean, but Chileans could dine out on authentic Chinese, and Kiwis could tuck into Spanish tapas for tea [sources: NOVA; Shegelski].

MIT Creates New Energy Source This is some pretty exciting news. It seems that researchers at the Massachusetts Institute of Technology (MIT), one of the most prestigious science and engineering schools in the United States, has created a new energy source -- and it's clean and renewable. The odd thing is that the only way you can see this energy source is with a very powerful microscope, because it is created by using nanotechnology. For a few years now, we have been hearing about the possibilities offered by the new field of nanotechnology. Now it looks like the first usable breakthrough has been accomplished. MIT has devised a process to generate electricity using nanotechnology. Will We Soon Be Able to Fire Laser Beams From Our Eyes? By day, Seok-Hyun Yun and Malte Gather are physicists at Massachusetts General Hospital. But at night, for the past four years, they worked on making a human cell behave like a laser. They built their human laser out of the same three components found in all lasers: a pump source, which provides the initial light energy; an optical cavity, which concentrates the light from the pump source into a beam; and a gain medium, a substance in which electrons are excited until they reach a higher-energy state and simultaneously release that energy as a beam of photons—laser light. Awesome!