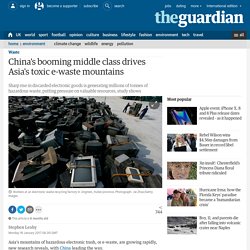 A record 16m tonnes of electronic trash, containing both toxic and valuable materials, were generated in a single year – up 63% in five years, new analysis looking at 12 countries in east and south-east Asia shows. In China the mountain of discarded TVs, phones, computers, monitors, e-toys and small appliances grew by 6.7m tonnes in 2015 alone. That’s an 107% increase in just five years. To get a sense of scale, if every woman, man and child in China had an old LCD monitor and dumped it the pile would not equal the 2015 tonnage. [1] The region’s fast-increasing middle class is the main driver of e-waste increases, not population growth, the report by the United Nations University found. “We risk future production of these devices and very high costs without recycling the materials,” he said. Nesta - the innovation foundation. Trump’s lies are not the problem. It’s the millions who swallow them who really matter. 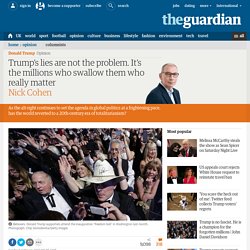 They can harm no one, if no one listens to them. Compulsive believers, on the other hand: they should terrify you. Believers are the liars’ enablers. Their votes give the demagogue his power. Their trust turns the charlatan into the president. How you see the believers determines how you fight them and seek to protect liberal society from its enemies.

Mainstream journalists are almost as credulous. “Rednecks” are also embarrassingly evident among Britain’s expensively educated conservative commentators, who cannot see how the world has changed. Brecht wrote against the dangers of inertia in 1935 as Hitler was changing Germany beyond recognition : Even in fabled Atlantis, the night that the ocean engulfed it, The drowning still cried out for their slaves. As their old world is engulfed now, the sluggish reflexes and limited minds of too many conservatives compel them to cry out against liberal hypocrisy, as if it were all that mattered. Facebook loses $500m Oculus virtual reality case as profits double. Facebook and two founders of its Oculus virtual reality technology have been ordered to pay $500m after losing a lawsuit. 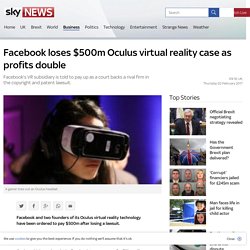 A jury in Dallas found in favour of video game maker ZeniMax Media, which had claimed the VR system was stolen. Oculus, which was bought by Facebook two years ago for $2bn, will have to pay $300m in damages. The lawsuit claimed the Oculus Rift headset was developed using code taken from ZeniMax's sofware. The claim that trade secrets had been stolen was dismissed by the jury, but Oculus was found liable for copyright infringement and other violations. 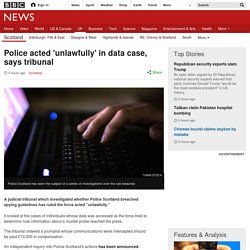 " It looked at the cases of individuals whose data was accessed as the force tried to determine how information about a murder probe reached the press. The tribunal ordered a journalist whose communications were intercepted should be paid £10,000 in compensation. An independent inquiry into Police Scotland's actions has been announced. The Interception of Communications Commissioner ruled in November 2015 that officers had broken new spying regulations by obtaining communications data without permission on five occasions. Officers had been attempting to find out how information about the investigation into the murder of Emma Caldwell in 2005 had appeared in the media. 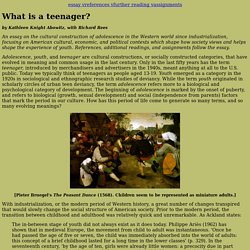 By Kathleen Knight Abowitz, with Richard Rees An essay on the cultural construction of adolescence in the Western world since industrialization, focusing on American cultural, economic, and political contexts which shape how society views and helps shape the experience of youth. References, additional readings, and assignments follow the essay. Adolescence, youth, and teenager are cultural constructions, or socially constructed categories, that have evolved in meaning and common usage in the last century. [Pieter Bruegel's The Peasant Dance (1568). With industrialization, or the modern period of Western history, a great number of changes transpired that would slowly change the social structure of American society.

The in-between stage of youth did not always exist as it does today. In most homes today, we do not expect ten-year-olds to act like twenty-year-olds. References Ackland, C. Côté, J. Christenson, P. Douglas, S.