This 1950s Newsreel where Louella Gallagher Throws knives at kids. : Damnthatsinteresting. As a bird lover this made me happy to know : tumblr. InternalAffair comments on SPD Riding a bike into a protester then arresting him. Untitled. Welcome to 'CE Corner' “The NSA has built an infrastructure that allows it to intercept almost everything . . . . I can get your emails, passwords, phone records, credit cards.” — Edward Snowden Protecting clients' privacy is clearly one of psychologists' top ethical priorities. To help prevent disclosures of patient information, APA offers specific guidance in its Ethics Code (APA, 2010) and its "Record Keeping Guidelines" (APA, 2007). Unfortunately, with today's ever-evolving technology, such guidance may not be enough. This article gives an overview of the current record-keeping and communication regulations and guidelines, looks at new threats to client data, discusses the ethical considerations psychologists face, and advocates for the foundation of best practices to prevent breaches of client data. 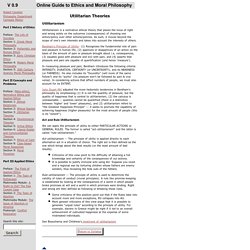 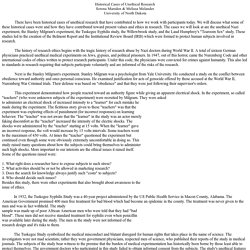 The Nazi Interrogator Who Revealed the Value of Kindness. The downed World War II fighter pilot had little reason to be wary. Thus far, his German interrogator had seemed uninterested in extracting military intelligence, and had acted with genuine kindness. He made friendly conversation, shared some of his wife’s delicious baked goods, and took the pilot out for a lovely stroll in the German countryside. So when the interrogator erroneously suggested that a chemical shortage was responsible for American tracer bullets leaving white rather than red smoke, the pilot quickly corrected him with the information German commanders sought. The Humane Interrogation Technique That Works Much Better Than Torture. The Senate Intelligence Committee report released this week found that the CIA tortured terror suspects by, among other things, putting hummus in a man's anus, forcing suspects to stand on broken feet, and blasting detainees with songs such as "Rawhide" at loud volumes on repeat. 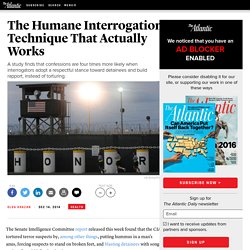 Learning From History: What Is Successful Interrogation? - globalECCO. By: LTC Ronny Kristoffersen, RNN As long as military units have taken prisoners in wartime, captors have agonized over how to entice or force their prisoners to share what they know. 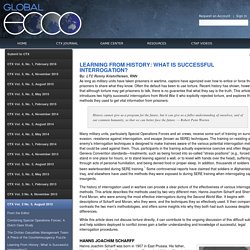 Often the default has been to use torture. Recent history has shown, however, that although torture may get prisoners to talk, there is no guarantee that what they say is the truth. This article introduces two highly successful interrogators from World War II who explicitly rejected torture, and explores the methods they used to get vital information from prisoners. History cannot give us a program for the future, but it can give us a fuller understanding of ourselves, and of our common humanity, so that we can better face the future. — Robert Penn Warren Many military units, particularly Special Operations Forces and air crews, receive some sort of training on survival, evasion, resistance against interrogation, and escape (known as SERE) techniques. 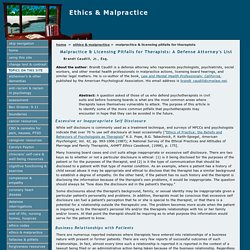 About the author: Brandt Caudill is a defense attorney who represents psychologists, psychiatrists, social workers, and other mental health professionals in malpractice actions, licensing board hearings, and similar legal matters. He is co-author of the book, Law and Mental Health Professionals: California, published by the American Psychological Association. His email address is brandt_caudill@cmwlaw.net. Abstract: A question asked of those of us who defend psychotherapists in civil suits and before licensing boards is what are the most common areas where therapists leave themselves vulnerable to attack. Practitioners_guide. EESE EthicalDecisionmakingFramework. Ethics. 1. 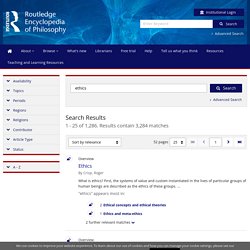 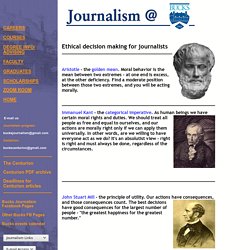 Aristotle: Ethics. Aristotle: Ethics and the Virtues The Goal of Ethics Aristotle applied the same patient, careful, descriptive approach to his examination of moral philosophy in the Εθικη Νικομαχοι (Nicomachean Ethics). 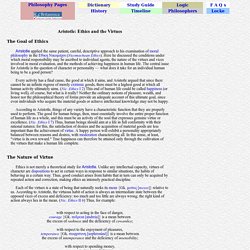 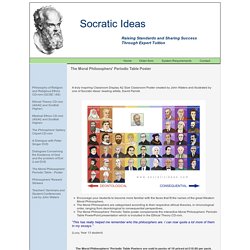 Who are the most significant moral philosophers in the history of Western philosophy? The Tuskegee Syphilis Study. The Tuskegee Syphilis Study. APA Guidelines on Multicultural Education, Training, Research, Practice and Organizational Change for Psychologists. Approved as APA Policy by the APA Council of Representatives, August, 2002 Abreu, J. M. (2001). Theory and research on stereotypes and perceptual bias: A resource guide for multicultural counseling trainers. The Counseling Psychologist, 29, 487—512. Adler, N. The Center For Ethical Practice. Ethical Decision-Making Model* Mary Alice Fisher, Ph.D., 2005The Center for Ethical Practice, Inc. A. Identify the problem and determine whether the matter is an ethical one.

Use your Ethics Code and other professional guidelines to identify the specific ethical issues. B. Virtue Ethics [Internet Encyclopedia of Philosophy] Virtue ethics is a broad term for theories that emphasize the role of character and virtue in moral philosophy rather than either doing one’s duty or acting in order to bring about good consequences. A virtue ethicist is likely to give you this kind of moral advice: “Act as a virtuous person would act in your situation.” Most virtue ethics theories take their inspiration from Aristotle who declared that a virtuous person is someone who has ideal character traits.

Confidentiality in the treatment of adolescents. Ethical%20decision%20making%20(Corey%20et%20al).pdf. The Center For Ethical Practice. Dr. Michio Kaku America Has A Secret Weapon. The Idea of Equality in America. Dr. Van Til heads the Department of History and is Chairman of the Social Science Core Program at Grove City College, Pennsylvania. He is the author of several books and articles and is active as a speaker. Further rights to this article are retained by him. What is the quote on the Statue of Liberty? Research Ethics Timeline (1932-Present) EESE_EthicalDecisionmakingFramework.pdf. Making Ethical Decisions: A 7-Step Path.

Last Updated: April 1, 2014 2:17:32 PM PDT. An Employer's Liability for Employee's Acts. Employers, and not the employees themselves, will often be held liable for the conduct of their employees. This is true even if the employer had no intention to cause harm and played no physical role in the harm. To understand why, you have to understand two basic concepts that underlie employer liability. First, employers are seen as directing the behavior of their employees and accordingly, must share in the good as well as the bad results of that behavior. 2013TanenbaumWorkplaceAndReligionSurveyEmail.pdf. Does age matter when you're CEO? By Del Jones, USA TODAY Barack Obama turned 47 last week, and John McCain turns 72 on Aug. 29, which leaves voters to choose from candidates who would widely be considered too young and too old to be CEOs of the largest corporations. Obama, born just after Alan Shepard became the first American in space, would have a hard sell to convince a board of directors at a big company that he's not unseasoned.

Silicon's Valley's Brutal Ageism. “I have more botox in me than any ten people,” Dr. Seth Matarasso told me in an exam room this February. How The U.S.'s Zero Weeks Of Paid Family Leave Compares To The Rest Of The World. By Adam Peck. The Universal Declaration of Human Rights. Virtue Ethics. Review of Michel Foucault, Discipline and Punish. Exposing Unethical Human Research: The Transatlantic Correspondence of Beecher and Pappworth. Bertrand Russell on Plato's Republic. Client information, Service Agreement and Billing Policies.pdf. The Myth of Confidentiality. Codes of Ethics on confidentiality in psychotherapy and counseling, by Ofer Zur, Ph.D.