Situational ethics. Situational ethics, or situation ethics, takes into account the particular context of an act when evaluating it ethically, rather than judging it according to absolute moral standards.[1] Early proponents of situational approaches to ethics included Kierkegaard, Sartre, de Beauvoir, Jaspers, and Heidegger.[2] Fletcher, who became prominently associated with this approach in the English-speaking world due to his eponymously-titled book (Situation Ethics), stated that "all laws and rules and principles and ideals and norms, are only contingent, only valid if they happen to serve love" in the particular situation,[4]:30 and thus may be broken or ignored if another course of action would achieve a more loving outcome. 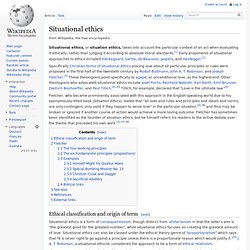 Fletcher has sometimes been identified as the founder of situation ethics, but he himself refers his readers to the active debate over the theme that preceded his own work.[4]:33-34 Ethical classification and origin of term[edit] Fletcher[edit] The four working principles[edit] Theory In Detail. Situationist Fletcher quoted a St Louis cab driver who said “Sometimes you’ve gotta put your principles to one side and do the right thing”. 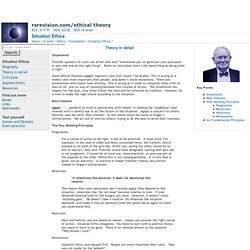 Rules (or principles) aren’t the same thing as doing what is right. Some ethical theories suggest legalistic rules that mustn’t be broken, This is wrong as it makes rules more important than people, and doesn’t allow exceptions. There are antinomians who reject rules entirely. This is wrong as it leads to complete chaos with no laws at all, and no way of choosing between two courses of action. Best Interests Agape - "... goodwill at work in partnership with reason" in seeking the "neighbour's best interest with a careful eye to all the factors in the situation".

The Four Working Principles Pragmatism For a course of action to be right, it has to be practical. Relativism ‘It relativizes the absolute, it does not absolutize the relative’. This means that rules (absolutes) don’t always apply, they depend on the situation. Positivism Personalism. Situation Ethics Overview. Situation Ethics is a very appealing approach. 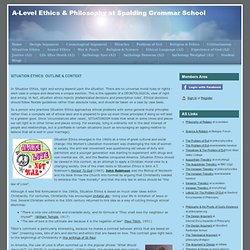 It avoids the written-in-stone rigidity of traditional ethics and the rather judgemental, heartless positions that traditional ethics can take on many subjects. It has the flexibility of Utilitarianism, without leading to any of the strange, perverse conclusions that Utilitarians can arrive at. It's based on Christian ideas about morality and seems to embody some of the most striking and revolutionary features of Jesus' thinking about ethics. It also seems very well-suited to resolving many of the ethical dilemas facing ordinary people in the 20th and 21st centuries: abortion and divorce, racism and sexism, multiculturalism, etc.