Anti-torture reforms opposed within psychology group after damning report. Opposition is building to intended anti-torture reforms within the largest professional organization of psychologists in the US, which faces a crossroads over what a recent report described as its past support for brutal military and CIA interrogations. 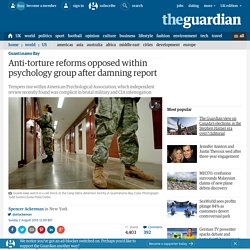 Before the American Psychological Association (APA) meets in Toronto next Thursday for what all expect will be a fraught convention that reckons with an independent review that last month found the APA complicit in torture, former military voices within the profession are urging the organization not to participate in what they describe as a witch hunt. Reformers consider the pushback to represent entrenched opposition to cleaving the APA from a decade’s worth of professional cooperation with controversial detentions and interrogations.

The APA listserv has become a key debating forum, with tempers rising on both sides. Williams did not return an email seeking comment. Training Officers to Shoot First, and He Will Answer Questions Later. Photo WASHINGTON — The shooting looked bad. 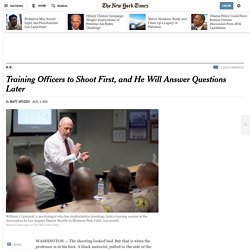 But that is when the professor is at his best. A black motorist, pulled to the side of the road for a turn-signal violation, had stuffed his hand into his pocket. The white officer yelled for him to take it out. When the driver started to comply, the officer shot him dead. The driver was unarmed. Taking the stand at a public inquest, William J. “In simple terms,” the district attorney in Portland, Ore., asked, “if I see the gun, I’m dead?” “In simple terms, that’s it,” Dr. When police officers shoot people under questionable circumstances, Dr. His conclusions are consistent: The officer acted appropriately, even when shooting an unarmed person. He has appeared as an expert witness in criminal trials, civil cases and disciplinary hearings, and before grand juries, where such testimony is given in secret and goes unchallenged. Psychologists met in secret with Bush officials to help justify torture – report.

The leading American professional group for psychologists secretly worked with the Bush administration to help justify the post-9/11 US detainee torture program, according to a watchdog analysis released on Thursday. 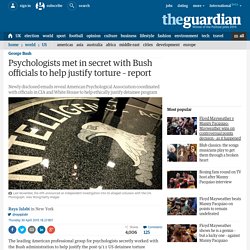 The report, written by six leading health professionals and human rights activists, is the first to examine the alleged complicity of the American Psychological Association (APA) in the “enhanced interrogation” program. Based on an analysis of more than 600 newly disclosed emails, the report found that the APA coordinated with Bush-era government officials – namely in the CIA, White House and Department of Defense – to help ethically justify the interrogation policy in 2004 and 2005, when the program came under increased scrutiny for prisoner abuse by US military personnel at the Abu Ghraib prison in Iraq.

Informed-consent forms should be shortened, simplified, Johns Hopkins bioethicists confirm. An in-depth review of consent forms provided to volunteers for HIV/AIDS research in the United States and abroad about study procedures, risks and benefits has found that the forms were extremely long and used wording that may have been complex enough to hinder full understanding, according to bioethicists at The Johns Hopkins University. 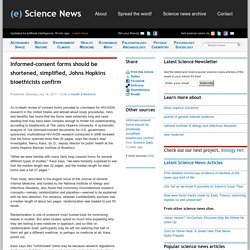 A systematic analysis of 124 informed-consent documents for U.S. government-sponsored, multinational HIV/AIDS research conducted in 2006 revealed that the forms spanned more than 20 pages, says the study's lead investigator, Nancy Kass, Sc.D., deputy director for public health at the Johns Hopkins Berman Institute of Bioethics. "While we were familiar with many fairly long consent forms for several different types of studies," Kass says, "we were honestly surprised to see that the median length was 22 pages, and the median length for adult forms was a full 27 pages. " Randomization is one of science's most trusted tools for minimizing biases in studies. 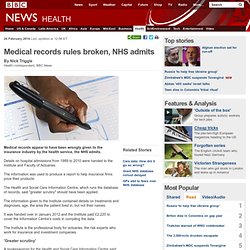 Details on hospital admissions from 1989 to 2010 were handed to the Institute and Faculty of Actuaries. The information was used to produce a report to help insurance firms price their products. The Health and Social Care Information Centre, which runs the database of records, said "greater scrutiny" should have been applied.