Kant's Aesthetics and Teleology. First published Sat Jul 2, 2005; substantive revision Wed Feb 13, 2013 Kant's views on aesthetics and teleology are given their fullest presentation in his Critique of Judgment (Kritik der Urteilskraft, also translated Critique of the Power of Judgment), published in 1790. 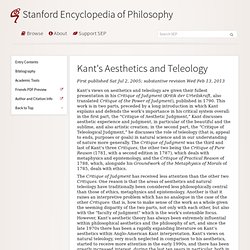 This work is in two parts, preceded by a long introduction in which Kant explains and defends the work's importance in his critical system overall: in the first part, the “Critique of Aesthetic Judgment,” Kant discusses aesthetic experience and judgment, in particular of the beautiful and the sublime, and also artistic creation; in the second part, the “Critique of Teleological Judgment,” he discusses the role of teleology (that is, appeal to ends, purposes or goals) in natural science and in our understanding of nature more generally. The Critique of Judgment has received less attention than the other two Critiques. 1. The Faculty of Judgment 2. Difference Between Deontology and Teleology. Deontology vs Teleology Ethics or moral philosophy is a branch of philosophy that involves questions about morality and the perception of good and evil, of right and wrong, of justice, virtue, and vice. 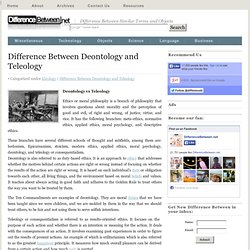 It has the following branches: meta-ethics, normative ethics, applied ethics, moral psychology, and descriptive ethics. These branches have several different schools of thought and subfields, among them are: hedonism, Epicureanism, stoicism, modern ethics, applied ethics, moral psychology, deontology, and teleology or consequentialism. PHILOSOPHY—teleological ethics. Theories of this type are called teleological because they look at what happens (or will happen) following an action which has a moral dimension – what the outcome (or end – which is where ‘telos’ comes from) is or will be. 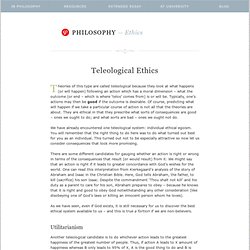 Typically, one’s actions may then be good if the outcome is desirable. Of course, predicting what will happen if we take a particular course of action is not all that the theories are about. They are ethical in that they prescribe what sorts of consequences are good – ones we ought to do; and what sorts are bad – ones we ought not do. We have already encountered one teleological system: individual ethical egoism. You will remember that the right thing to do here was to do what turned out best for you as an individual. Teleology (philosophy. The History of Utilitarianism. 1. 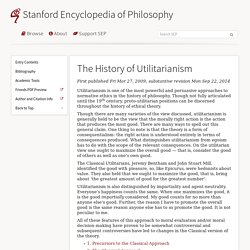 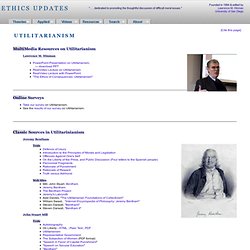 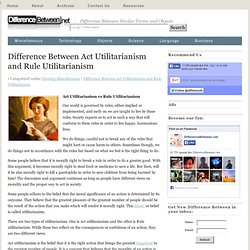 Society expects us to act in such a way that will conform to these rules in order to live happy, harmonious lives. We do things, careful not to break any of the rules that might hurt or cause harm to others. Sometimes though, we do things not in accordance with the rules but based on what we feel is the right thing to do. Some people believe that it is morally right to break a rule in order to do a greater good. Some people adhere to the belief that the moral significance of an action is determined by its outcome. There are two types of utilitarianism. Act utilitarianism is the belief that it is the right action that brings the greatest happiness to the greatest number of people.

Summary 1. Online Guide to Ethics and Moral Philosophy. Utilitarianism Utilitarianism is a normative ethical theory that places the locus of right and wrong solely on the outcomes (consequences) of choosing one action/policy over other actions/policies. 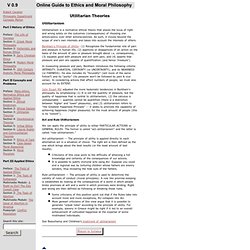 As such, it moves beyond the scope of one's own interests and takes into account the interests of others. Bentham's Principle of Utility: (1) Recognizes the fundamental role of pain and pleasure in human life, (2) approves or disapproves of an action on the basis of the amount of pain or pleasure brought about i.e, consequences, (3) equates good with pleasure and evil with pain, and (4) asserts that pleasure and pain are capable of quantification (and hence 'measure'). In measuring pleasure and pain, Bentham introduces the following criteria: INTENSITY, DURATION, CERTAINTY (or UNCERTAINTY), and its NEARNESS (or FARNESS).

Utilitarian Ethics. Calculating Consequences: The Utilitarian Approach to Ethics By Claire Andre and Manuel Velasquez When Oliver North was asked to explain why he lied to congressional committees about his role in the Iran-Contra affair, he replied, "Lying does not come easily to me. 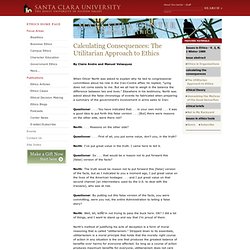 But we all had to weigh in the balance the difference between lies and lives. " Elsewhere in his testimony, North was asked about the false chronology of events he fabricated when preparing a summary of the government's involvement in arms sales to Iran: Questioner: . . . North: . . . Questioner: . . . North: I've put great value in the truth. Questioner: So . . . that would be a reason not to put forward this [false] version of the facts? Questioner: By putting out this false version of the facts, you were committing, were you not, the entire Administration to telling a false story? North: Well, let, letÑI'm not trying to pass the buck here. Utilitarianism. Deontological Ethics. First published Wed Nov 21, 2007; substantive revision Wed Dec 12, 2012 The word deontology derives from the Greek words for duty (deon) and science (or study) of (logos). 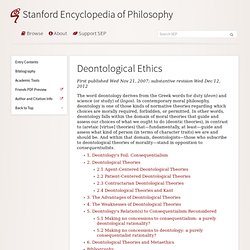 In contemporary moral philosophy, deontology is one of those kinds of normative theories regarding which choices are morally required, forbidden, or permitted. In other words, deontology falls within the domain of moral theories that guide and assess our choices of what we ought to do (deontic theories), in contrast to (aretaic [virtue] theories) that—fundamentally, at least—guide and assess what kind of person (in terms of character traits) we are and should be. And within that domain, deontologists—those who subscribe to deontological theories of morality—stand in opposition to consequentialists. 1. Consequentialists can and do differ widely in terms of specifying the Good. Deontology (Part 2) PHILOSOPHY—deontological ethics. Theories in this category address the question of what makes one action right and another one wrong irrespective of the consequences of the action. 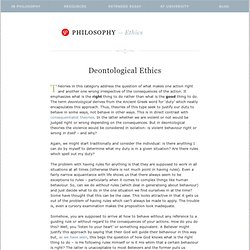 It emphasizes what is the right thing to do rather than what is the good thing to do. The term deontological derives from the Ancient Greek word for ‘duty’ which neatly encapsulates this approach. Thus, theories of this type seek to justify our duty to behave in some ways, not behave in other ways. This is in direct contrast with consequentialist theories.

In the latter whether we are violent or not would be judged right or wrong depending on the consequences. Again, we might start traditionally and consider the individual: is there anything I can do by myself to determine what my duty is in a given situation? Online Guide to Ethics and Moral Philosophy. Acting from Duty Deontological normative ethical theories place the locus of right and wrong in autonomous adherence to moral laws or duties. Monistic deontology -- Kant's Categorical Imperative ("Act only on that maxim whereby thou canst at the same time will that it should become a universal law") provides the source of right action. Its first formulation states "Act as if the maxim of your action were to secure through your will a universal law of nature;" its second formulation states "Always act so as to treat humanity, whether in your own person or that of another, as an end in itself, never as a means only.

" Actions that conform to these imperatives (i.e., right actions) and are, furthermore, done from a sense of duty, are the epitome of morally praiseworthy actions. Critics of Kant's approach claim that his Categorical Imperative does not contain within it a way to resolve conflicts of duties. Pluralistic deontology -- For the 20th Century philosopher W. Deontology (Part 1) Principles of Normative Ethics. Descriptive theory explains how things are (e.g., this paper is white; most Americans eat meat; etc.), whereas normative or prescriptive theory tells us how things ought to be (people ought to be honest, etc.).

Ethics  The field of ethics (or moral philosophy) involves systematizing, defending, and recommending concepts of right and wrong behavior. Philosophers today usually divide ethical theories into three general subject areas: metaethics, normative ethics, and applied ethics. Metaethics investigates where our ethical principles come from, and what they mean. Normative ethics (philosophy. Normative Ethics: Intro & Virtue Ethics. Normative Ethics. Updated October 15,2013 "The thief and the murderer follow nature just as much as the philanthropist" - Thomas Henry Huxley. Normative Ethics and Metaethics. Normative: an authoritative standard; a model; that by which other things are judged; an example for imitation or emulation. The term "normative" reflects the ordinary view that some things are better than others.

Illustrations surround us. Online Guide to Ethics and Moral Philosophy.