The Torture Report. Should Christians endorse, tolerate, or participate in the use of torture? 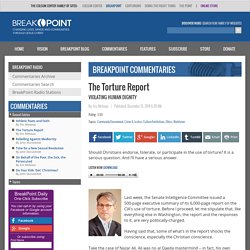 It is a serious question. And I’ll have a serious answer. Listen Now | Download Last week, the Senate Intelligence Committee issued a 500-page executive summary of its 6,000-page report on the CIA’s use of torture. Before I proceed, let me stipulate that, like everything else in Washington, the report and the responses to it, are very politically-charged. Having said that, some of what’s in the report shocks the conscience, especially the Christian conscience. Take the case of Nazar Ali. Not because he knew anything. Compared to others held in detention, Nazar Ali certainly got off lightly. Www.intelligence.senate.gov/study2014/sscistudy1.pdf.

500-Page Torture Report Released. Come for the Forced Enemas. Stay for the Incompetent Leadership. Credit: Credit: Shrieking Tree / photo on flickrAfter years of struggle with executive branch agencies, the Senate Select Committee on Intelligence’s report on the CIA’s “Detention and Interrogation Program” has been released. 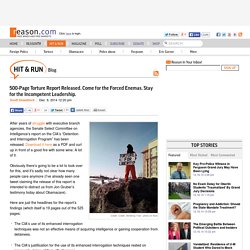 Download it here as a PDF and curl up in front of a good fire with some wine. A lot of it. Obviously there’s going to be a lot to look over for this, and it’s sadly not clear how many people care anymore (I’ve already seen one tweet claiming the release of this report is intended to distract us from Jon Gruber’s testimony today about Obamacare). Here are just the headlines for the report’s findings (which itself is 19 pages out of the 525 pages: (This is where they document that five detainees were given forced enemas) President George W. 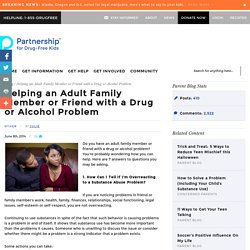 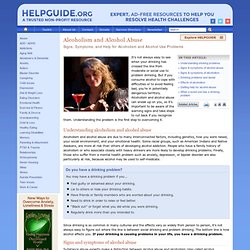 Some racial groups, such as American Indians and Native Alaskans, are more at risk than others of developing alcohol addiction. People who have a family history of alcoholism or who associate closely with heavy drinkers are more likely to develop drinking problems. Finally, those who suffer from a mental health problem such as anxiety, depression, or bipolar disorder are also particularly at risk, because alcohol may be used to self-medicate. Do you have a drinking problem? You may have a drinking problem if you... Feel guilty or ashamed about your drinking. Since drinking is so common in many cultures and the effects vary so widely from person to person, it’s not always easy to figure out where the line is between social drinking and problem drinking.

Signs and symptoms of alcohol abuse. Pennsylvania Department of Education. Facilitation Notes When the Professional Standards and Practices Commission first envisioned providing an on-line resource to the educational community, it wanted the focus to be on assisting educators in developing a framework for ethical decision-making and not merely a tutorial on the types of misconduct cases that come before the Commission. 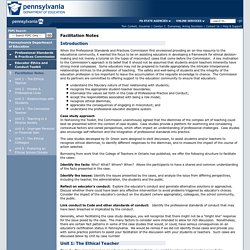 A key motivation to the Commission’s approach is its belief that it should not be assumed that students and/or teachers inherently have strong moral compasses. Some educators may not be prepared to handle appropriately the intricate interpersonal relationships intrinsic to the profession of teaching. The safety and well-being of students and the integrity of the education profession is too important to leave the accumulation of the requisite knowledge to chance. The Commission and its partners are committed to offering support to the education community to ensure that educators: The case studies developed by Dr. Identify the facts: Who? 22 Pa. Www.aps.org/programs/education/ethics/upload/Ethics-Case-Studies-Teacher-Edition.pdf. Teacher Dumped After Stern Appearance Sues. JUNE 27--Meet Marie Jarry (and her husband Aaron). 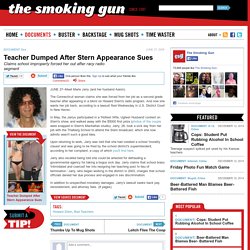 The Connecticut woman claims she was forced from her job as a second grade teacher after appearing in a bikini on Howard Stern's radio program. And now she wants her job back, according to a lawsuit filed Wednesday in U.S. District Court in New Haven. In May, the Jarrys participated in a 'Hottest Wife, Ugliest Husband' contest on Stern's show, and walked away with the $5000 first prize (photos of the couple were snapped in Stern's Manhattan studio). Jarry, 28, took a sick day from her job with the Thalberg School to attend the Stern broadcast, which she now admits wasn't such a good idea. Upon returning to work, Jarry was told that she had violated a school 'morality clause' and was going to be fired by the school district's superintendent, according to her complaint, a copy of which you'll find here.