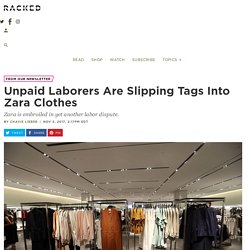 Want more news from Racked? Sign up for our newsletter here. Zara, with $69.8 million in annual sales and more than 2,200 stores worldwide, might be one of the world’s most successful fast-fashion companies, but it did not make that kind of cash with clean hands. The Associated Press reports today that shoppers in Istanbul are finding unexpected tags inside Zara merchandise proclaiming, “I made this item you are going to buy, but I didn’t get paid for it.” Turkish workers employed by third-party manufacturer Bravo say they’re owed three months’ pay after the company shut down overnight. While nothing ever seems to impact its bottom line — Amancio Ortega, the owner of parent company Inditex, is the world’s richest man — Zara is consistently taken to task for causing colossal environmental damage, ripping off various fashion designers, and turning a blind eye to dismal factory conditions.

Facebook. Cultural Appropriation: Theft or Innovation? Nancybird - HOME makers. The rise of the ugly puffer jacket hides a cruel truth. Updated Say what you like about Vladimir Putin, the President of Russia, it turns out that he may be the most ethically conscious fashion person in the world. 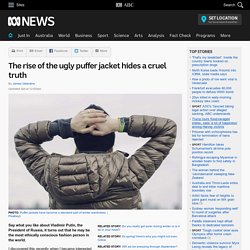 I discovered this recently when I became interested in the rise of the puffer jacket. Why were we all wearing them this winter? The down jacket, once used only when climbing Everest, is now on the back of every parent on a chilly Saturday morning at netball, on every skier, on everyone out in the cold. Follow the Things. TRAIDFilms. You buy the clothes, you have the power. Why you should participate in #FashionRevolutionDay. The 'Chilling' Moment This Father Realized Where His Kids' Clothes Come From.

Indian Garment Suppliers for Big Brands Work in Conditions 'Worse than Sweatshops' MUMBAI (Thomson Reuters Foundation) - Every day, after she finishes cooking, cleaning and fetching water for her tiny one-room home in India's financial capital Mumbai, Saubhagya Nadelkari picks up a stack of leather strips and makes her way to her neighbor's home. 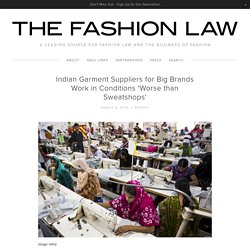 There, in a narrow alley that is covered with plastic, about half a dozen women sit or stand as they braid long strips for use in belts, sandals and bags. They talk and laugh as their fingers fly, knotting each strip at the end when it is done. "I have been doing this for about 10 years. We used to get more work, now we get less, and get paid less," said Nadelkari, who makes about 100 pieces a day.

She is paid about 24 rupees ($0.40) for a set of 12 finished pieces. Nadelkari and her friends are among nearly 38 million home-based workers in India, according to a 2012 survey by WIEGO, a global non-profit focused on informal workers. Behindthebarcode.org. These are the brands not telling you if their clothes are ethically made. Topshop, ASOS, Adidas and Ralph Lauren all scored really badly Fashion Revolution and Ethical Consumer partnered up to create a Fashion Transparency Index that ranks companies according to the level of transparency in their supply chain. 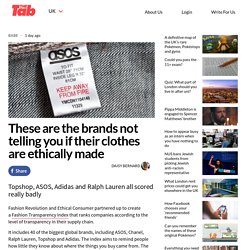 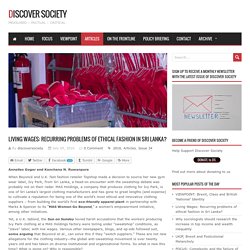 Ruwanpura When Beyoncé and U.K. fast fashion retailer Topshop made a decision to source her new gym wear label, Ivy Park, from Sri Lanka, a head-on encounter with the sweatshop debate was probably not on their radar. MAS Holdings, a company that produces clothing for Ivy Park, is one of Sri Lanka’s largest clothing manufacturers and has gone to great lengths (and expense) to cultivate a reputation for being one of the world’s most ethical and innovative clothing suppliers – from building the world’s first eco-friendly apparel plant in partnership with Marks & Spencer to its “MAS Women Go Beyond,” a women’s empowerment initiative, among other initiatives.

Yet, a U.K. tabloid, the Sun on Sunday levied harsh accusations that the workers producing Ivy Park clothing at a MAS Holdings factory were toiling under “sweatshop” conditions, as “slave” labor, with low wages. Annelies M. How to shop ethically and still look on point - Hack - triple j. Three years after the deadliest accident in the fashion industry some of Australia’s top brands are still failing to source their clothes ethically, according to a new report on the industry. 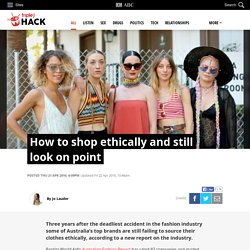 Baptist World Aid’s Australian Fashion Report has rated 87 companies and graded them from A to F, with brands like General Pants and Lorna Jane scoring amongst the worst. However, the report shows the industry has worked hard to improve their standards since the Rana Plaza factory collapse in three years ago, killing 1,136 clothing workers. The Australian Fashion Report looked at the traceability and transparency of a label’s supply chain and what their workers are paid. More than 45 million people trapped in modern slavery with two-thirds in Asia-Pacific region, report finds. Updated More than 45 million people are living as modern slaves around the world, according to the 2016 Global Slavery Index, with two-thirds reported in the Asia-Pacific region. 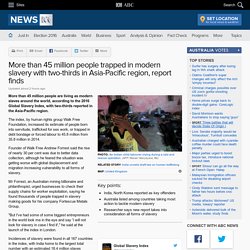 Key points: India, North Korea reported as key offendersAustralia listed among countries taking most action to tackle modern slaveryResearcher says new report takes into consideration all forms of slavery. Hundreds of Bangladeshi factories to shut indefinitely. Updated Hundreds of Bangladesh garment factories will be closed indefinitely in the wake of a building collapse that killed more than 1,100 people. 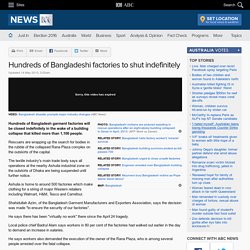 Rescuers are wrapping up the search for bodies in the rubble of the collapsed Rana Plaza complex on the outskirts of the capital. The textile industry's main trade body says all operations at the nearby Ashulia industrial zone on the outskirts of Dhaka are being suspended until further notice. Ashulia is home to around 500 factories which make clothing for a string of major Western retailers including Walmart, H&M, Tesco and Carrefour. Shahidullah Azim, of the Bangladesh Garment Manufacturers and Exporters Association, says the decision was made "to ensure the security of our factories". Three killed in Bangladesh textile factory fire. Posted A fire in a textile factory in Bangladesh has killed three workers and left five injured, police say, in the latest incident to cast a spotlight on the country's hazardous garment industry. 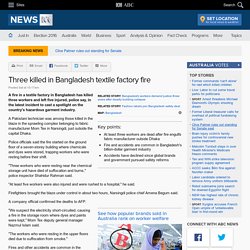 Key points: At least three workers are dead after fire engulfs fabric manufacturer outside DhakaFire and accidents are common in Bangladesh's billion-dollar garment industryAccidents have declined since global brands and government pursued safety reforms A Pakistani technician was among those killed in the blaze in the sprawling complex belonging to fabric manufacturer Mom Tex in Narsingdi, just outside the capital Dhaka. Home. Australian fashion companies fail to disclose supply chain, risk worker exploitation, report says. Updated Australian companies such as Oroton and Seed have been criticised for failing to publicly disclose where they source their clothes from. 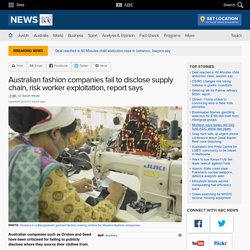 Key points Garment industry employs more than 40 million people in Asia PacificMany Australian fashion companies still don't know suppliers and where the raw materials come fromReport shows improvements since the 2013 Rana Plaza building collapse in Bangladesh Two reports, authored by Baptist World Aid and Oxfam, and obtained by 7.30, disclose which companies have knowledge of their complex supply chain. Behindthebarcode.org. Only TWO of 59 Australian clothes brands pay 'living wages' to their workers. Australian Fashion Report revealed the Australian-sold brands and companies that ignore the exploitation of their overseas workersLowes, Industrie, Best & Less and the Just Group - which includes Just Jeans, Portmans and Dotti - were some of the worst performersEtiko, Audrey Blue, Cotton On, H&M and Zara had some of the best scores75 per cent of companies don't know the source of all their fabrics and inputs By Lillian Radulova for Daily Mail Australia Published: 07:36 GMT, 17 April 2015 | Updated: 02:26 GMT, 21 April 2015.

Only TWO of 59 Australian clothes brands pay 'living wages' to their workers. Ethical Fashion — The Note Passer. Fair Work Ombudsman investigating exploitation of migrant clothing workers union claims are being paid as little as $3 an hour. Updated The Fair Work Ombudsman will begin a two-year investigation into whether the exploitation of migrant clothing workers is widespread. The workplace watchdog said it was concerned some workers had been underpaid and offered no entitlements or workplace protection. Full Page - Ethical clothing. You’re likely to spend an average of $2288 on clothing and footwear this year. And if you’re concerned about the conditions those clothes were made under, it’ll be difficult to find out. CHOICE explains: why even Australian-made clothes aren’t always made under ethical conditions how to buy ethically made clothes the supply chain and how our clothes are sourced how much our clothes cost to make and where they come from why ethical sourcing codes and audits haven’t solved the problem what the major brands say.

Made in Australia. Fashioning an ethical industry - Fashioning an Ethical Industry across Europe. Labour Behind the Label. The Real Cost of Sewing. One of the questions I'm most frequently asked by non-stitchers is whether sewing your own clothes saves you money. The cost of sewing can vary greatly depending on your choice of fabric, but let's consider the costs involved in an example dressmaking project: Fashion fabric x 2 metres - £20 Lining fabric - £6 Thread x 2 spools - £3 Buttons x 6 - £4.50 Binding - £2.50 Calico for bodice toile - £3 Belt and buckle kit - £6 Pattern - £6TOTAL: £51.00 On top of that, consider the odd supply you may need, such as a change of sewing machine needles or spare bobbins, plus depreciation of your machine and other existing tools.

At a modest guess, let's say these things cost £300 over 5 years, so if you make one project a month that works out as an extra £5 per project. Minimum Wages Around the Globe: You're Underpaid, and So Is the Rest of the World. "No business which depends for existence on paying less than living wages to its workers has any right to continue in this country. " That's what former Pres. Franklin Roosevelt said in 1933, in a speech announcing his plan to help America's recovery and forever shaping what would become one of his landmark ideals.

Get Into Textiles: Ethical Textiles? - Ep 9 Of 10. FASHION VICTIMS - Four Corners. How much should a t-shirt cost - $5, $50 or $500? Ethical Clothing Australia. Making Textile, Clothing or Footwear products in Australia <br /> An ECA Guide to Your Legal Obligations. ECA. Find Ethical Australian Products. Resources for students. Mastering the Ethics of Fashion.