Moral Machine. Conflict Free Minerals and Intel. Conflict Minerals. The mineral trade has funded some of the world’s most brutal conflicts for decades. 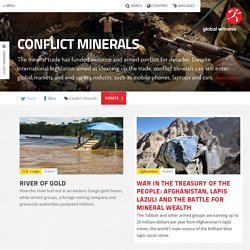 Today, resources from conflict or high-risk areas, such as parts of Afghanistan, Colombia, the Democratic Republic of Congo (DRC), and Zimbabwe, can fund armed groups and fuel human rights abuses. These resources can enter global supply chains, ending up in our mobile phones, laptops, jewelry and other products. Programmers are having a huge discussion about the unethical and illegal things they’ve been asked to do. Earlier this week, a post written by programmer and teacher Bill Sourour went viral. 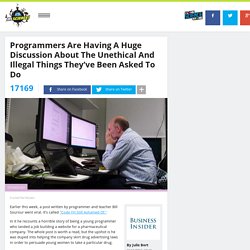 Trump Campaign Pays Millions to Overseas Big Data Firm. LONDON — Big data crunched in a nondescript office more than 3,000 miles from the U.S. might just convince you to cast a ballot for Donald Trump. 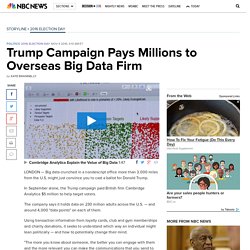 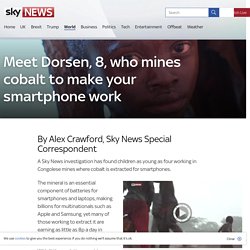 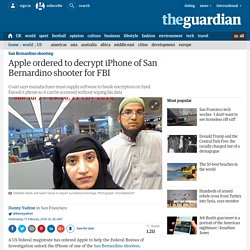 The order is the most high-profile case yet of the federal government trying to figure out how to use existing law to get around stronger encryption being used in consumers’ phones. It is likely to add more fire to an already heated debate between Silicon Valley and Washington DC about the balance between national security and electronic privacy. UN Global Compact. Ethics: Guide to moral and ethical issues. The PLUS Ethical Decision Making Model - Ethics & Compliance Initiative (ECI) Seven Steps to Ethical Decision Making - Step 1: Define the problem (consult PLUS filters) - Step 2: Seek out relevant assistance, guidance and support - Step 3: Identify alternatives - Step 4: Evaluate the alternatives (consult PLUS filters) - Step 5: Make the decision - Step 6: Implement the decision - Step 7: Evaluate the decision (consult PLUS filters) Introduction Organizations struggle to develop a simple set of guidelines that makes it easier for individual employees, regardless of position or level, to be confident that his/her decisions meet all of the competing standards for effective and ethical decision-making used by the organization. 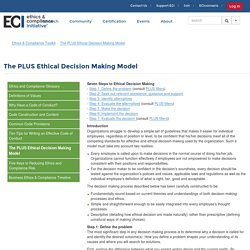 Such a model must take into account two realities: Every employee is called upon to make decisions in the normal course of doing his/her job. Organizations cannot function effectively if employees are not empowered to make decisions consistent with their positions and responsibilities. Energy Efficiency, Data Centers. Environmental Issues > Energy Main Page > All Energy Documents Critical Action Needed to Save Money and Cut Pollution Data centers are one of the largest and fastest growing consumers of electricity in the United States. 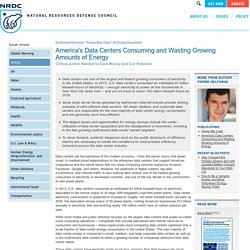 In 2013, U.S. data centers consumed an estimated 91 billion kilowatt-hours of electricity -- enough electricity to power all the households in New York City twice over -- and are on-track to reach 140 billion kilowatt-hours by 2020.Some large server farms operated by well-known Internet brands provide shining example of ultra-efficient data centers. Data centers are the backbone of the modern economy -- from the server rooms that power small- to medium-sized organizations to the enterprise data centers that support American corporations and the server farms that run cloud computing services hosted by Amazon, Facebook, Google, and others. Recommendations. The woman who nearly died making your iPad. At around 8am on 17 March 2010, Tian Yu threw herself from the fourth floor of her factory dormitory in Shenzhen, southern China. 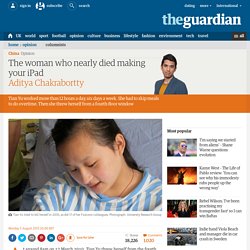 For the past month, the teenager had worked on an assembly line churning out parts for Apple iPhones and iPads. At Foxconn's Longhua facility, that is what the 400,000 employees do: produce the smartphones and tablets that are sold by Samsung or Sony or Dell and end up in British and American homes. But most famously of all, China's biggest factory makes gadgets for Apple. Apple iPhones could soon be built in India. iPhones could soon be made in India as well as China, according to Indian government officials. 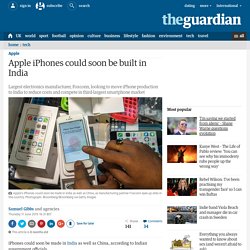 Apple’s manufacturing partner Foxconn, which makes the iPhone, iPad and several other Apple products in factories in China, is in talks to open factories in India to make iPhones. The move would help Foxconn mitigate accelerating labour costs in China, potentially lower prices for iPhones sold in India and move the site of construction closer to buyers in the world’s third-largest smartphone market. US intelligence chief: we might use the internet of things to spy on you. The US intelligence chief has acknowledged for the first time that agencies might use a new generation of smart household devices to increase their surveillance capabilities. 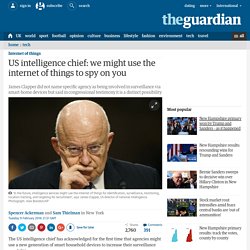 As increasing numbers of devices connect to the internet and to one another, the so-called internet of things promises consumers increased convenience – the remotely operated thermostat from Google-owned Nest is a leading example. But as home computing migrates away from the laptop, the tablet and the smartphone, experts warn that the security features on the coming wave of automobiles, dishwashers and alarm systems lag far behind. Intel & Conflict Minerals. War Child - The charity for children affected by war. World Economic Forum: Robots And Artificial Intelligence To Wipe Out 5.1 Million Jobs By 2020. The human race should be braced for robots taking 5.1 million of our jobs, the World Economic Forum (WEF) has warned. In a report titled 'The Future of Jobs' it explained how we are on the cusp of the fourth industrial revolution - one that is shaped by the rapid growth of technology.

Describing the trends we should expect, the report states: "more than 5.1 million jobs lost to disruptive labour market changes over the period 2015–2020, with a total loss of 7.1 million jobs—two thirds of which are concentrated in routine white collar office functions, such as Office and Administrative roles—and a total gain of 2 million jobs, in Computer and Mathematical and Architecture and Engineering related fields. " Google's Artificial Brain Learns to Find Cat Videos. By Liat Clark, Wired UK When computer scientists at Google’s mysterious X lab built a neural network of 16,000 computer processors with one billion connections and let it browse YouTube, it did what many web users might do — it began to look for cats. [partner id=”wireduk”] The “brain” simulation was exposed to 10 million randomly selected YouTube video thumbnails over the course of three days and, after being presented with a list of 20,000 different items, it began to recognize pictures of cats using a “deep learning” algorithm.

BBC Radio 4 - A History of Ideas - A History of Ideas. Interactive: Trolley Problems, Omission Bias and the Morality of Killing. Andreas Ekström: The moral bias behind your search results. Henri 2, Paw de Deux. Monty Python - Philosopher Football. Children as young as seven are mining metals for your mobile phone, according to Amnesty International. China 'social credit': Beijing sets up huge system. In most countries, the existence of a credit system isn't controversial.

Past financial information is used to predict whether individuals will pay their mortgages or credit card bill in the future. But China is taking the whole concept a few steps further. The Chinese government is building an omnipotent "social credit" system that is meant to rate each citizen's trustworthiness. We need to debate killer robot ethics before it becomes mass market. U.S. Sues Volkswagen Over Emissions Scandal.