What Ethical Leadership Looks Like: Don’t pat yourself on the back just yet… Enron's Vision (and Values) Thing. As a partner in the communities in which we operate, Enron believes it has a responsibility to conduct itself according to certain basic principles.'' Thus begins the ''Vision and Values'' statement of the company whose bankruptcy, moral and otherwise, has become infamous. 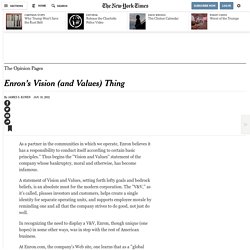 A statement of Vision and Values, setting forth lofty goals and bedrock beliefs, is an absolute must for the modern corporation. The ''V&V,'' as it's called, pleases investors and customers, helps create a single identity for separate operating units, and supports employee morale by reminding one and all that the company strives to do good, not just do well. In recognizing the need to display a V&V, Enron, though unique (one hopes) in some other ways, was in step with the rest of American business.

Don’t Coach Integrity Violations – Fire Them! 3 Cultural Problems that cause Good Employees to go Bad. What It Will Take to Change the Culture of Wall Street - Steven G. Mandis. By Steven G. 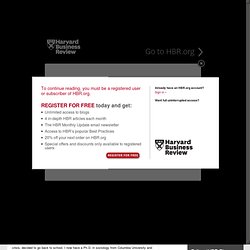 Mandis | 8:00 AM October 24, 2014 William C. Dudley, the president of the Federal Reserve Bank of New York, gave a speech Monday in which he used the word “culture” 45 times. Here’s how he defined it: Culture relates to the implicit norms that guide behavior in the absence of regulations or compliance rules—and sometimes despite those explicit restraints. … Culture reflects the prevailing attitudes and behaviors within a firm. Dudley has a doctorate in economics, and spent a decade as chief economist at Goldman Sachs.

I studied economics too, as an undergraduate. Many people find it peculiar that a former proprietary trader with a background in economics would go back to school and study sociology. So I studied sociology, and for my doctoral dissertation focused on the organizational culture of Goldman Sachs. After the book was published, Dudley got in touch. Consider what actually happened at JP Morgan Chase after the gigantic “London whale” trading loss. Reframe a Moral Dilemma with Just One Word - Gretchen Gavett. Coulda Woulda Shoulda Does “Could” Lead to Good? 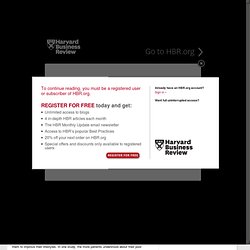 Toward a Theory of Moral Insight Working Knowledge. Becoming a First-Class Noticer. I’ve spent the past decade studying why some people notice and act on organizational threats and opportunities while others do not. 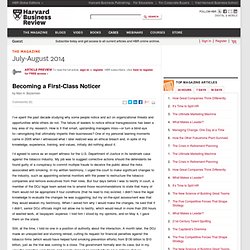 The failure of leaders to notice ethical transgressions has been a key area of my research. How is it that smart, upstanding managers miss—or turn a blind eye to—wrongdoing that ultimately imperils their businesses? One of my personal learning moments came in 2005 when I witnessed what I later realized was an ethical breach and, in spite of my knowledge, experience, training, and values, initially did nothing about it. I’d agreed to serve as an expert witness for the U.S.

Department of Justice in its landmark case against the tobacco industry. Still, at the time, I told no one in a position of authority about the interaction. I’m generally an inquisitive person. Identifying the Challenges. The Standard You Walk Past Is The Standard You Accept. The Data's In: Honesty Really Does Start at the Top - Jack Zenger and Joseph Folkman. 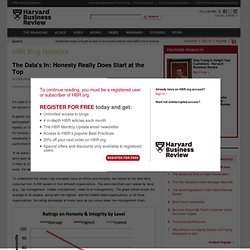 So when we ran across one of those exceptional individuals, we wanted to have a word with him. A global controller of a professional services firm of more than 40,000 employees, he’d just participated in a 360-feedback process where he’d been assessed by his manager, peers, and direct reports on 16 leadership competencies. And he’d hit that elusive 90th percentile mark on his ratings for honesty and integrity. Explaining just what a difficult feat it is to receive feedback marks that remarkably high, we asked him: “What is your secret?”

“It all starts with my boss and his boss,” he replied. Are we looking for heroes in the wrong places? Tom Walters, Los Angeles Bureau Chief Published Friday, January 18, 2013 10:59PM EST Last Updated Saturday, January 19, 2013 10:18PM EST When a doping athlete says “everyone was doing it,” it is just another lie. 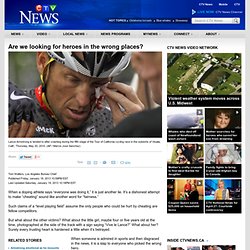 It’s a dishonest attempt to make “cheating” sound like another word for “fairness.” Such claims of a “level playing field” assume the only people who could be hurt by cheating are fellow competitors. But what about the other victims? What about the little girl, maybe four or five years old at the time, photographed at the side of the track with a sign saying “Vive le Lance?” A shout-out for ethical behaviour in the workplace. Giving Voice to Values By Mary Gentile (Yale University Press, 273 pages, $17.97) The ethical outages at prominent companies in recent years has led us to think that far too many business people are morally challenged or idiots who can’t tell right from wrong. 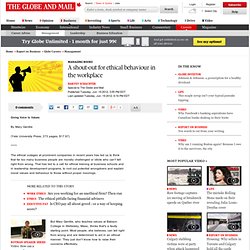