Untitled. While there’s much to celebrate in medicine, it’s now beyond doubt that we have too much of it. 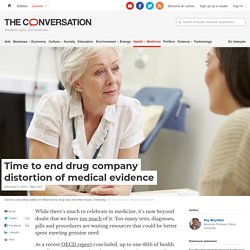 Too many tests, diagnoses, pills and procedures are wasting resources that could be better spent meeting genuine need. - The Washington Post. Exploring the Asymmetrical Relationship Between the Power of Finance Bias and Evidence. - PubMed - NCBI. Towards trustworthy, useful, and independent guidelines -acknowledging conflicts when they exist. Big pharma pours millions into medical schools — here’s how it can impact education. This is the third story in a four-part series about the pharmaceutical industry and the hold it has on Canada’s health-care system — swaying doctors’ opinions, funding medical schools and, ultimately, affecting the type of drugs we are prescribed. 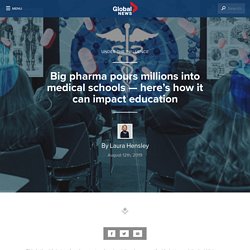 ‘Manipulating physicians’: How drug reps pitch your doc. This is the second story in a four-part series about the pharmaceutical industry and the hold it has on Canada’s health-care system — swaying doctors’ opinions, funding medical schools and, ultimately, affecting the type of drugs we are prescribed. 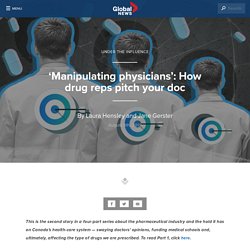 To read Part 1, click here. Jack wore polos in the summer and button-up shirts in the winter — never a tie. He had a briefcase he often left in the car, preferring the more discreet look of a slim folder for his promotional materials. Other drug reps often wore suits, says Jack, a former drug rep who agreed to speak on the condition his name was changed as he still works in health care.

DEFINE_ME. Drug company founder convicted of bribing doctors with money, strippers to sell more Fentanyl. A pharmaceutical company founder accused of paying doctors millions of dollars in bribes to prescribe a highly addictive fentanyl spray was convicted Thursday in a case that exposed such marketing tactics as using a stripper-turned-sales-rep to give a physician a lap dance. 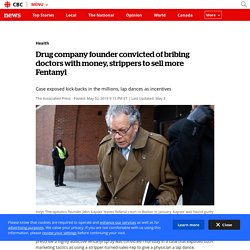 John Kapoor, the 76-year-old former chairman of Insys Therapeutics, was found guilty of racketeering conspiracy after 15 days of jury deliberations. How Billionaires and Big Pharma Battled Canada’s National Drug Plan. [Editor’s note: The federal government didn’t deliver a national pharmacare plan in last month’s budget, despite announcing an advisory council to advise on implementing a national program in the 2018 budget. 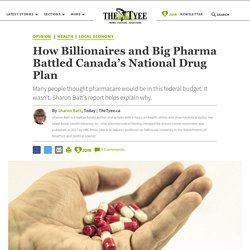 Why? Study Links Drug Maker Gifts for Doctors to More Overdose Deaths JAMA: Closed Financial Loops: When They Happen in Government, They're Called Corruption; in Medicine, They're Just a Footnote - Jesus‐Morales - 2017 - Hastings Center Report. Vitamin D, the Sunshine Supplement, Has Shadowy Money Behind It. What Big Pharma pays your doctor. Members of Innovative Medicines Canada (IMC), the lobby group for the large pharmaceutical companies, recently released their voluntary reports of payments to health-care professionals and health-care organizations. 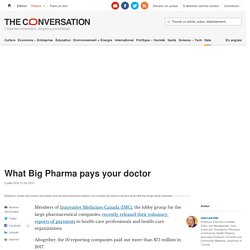 Altogether, the 10 reporting companies paid out more than $75 million in 2017. Pre$cription For Power: KHN Patient Advocacy DatabaseKaiser Health News. Patient Advocacy Groups Take In Millions From Drugmakers. Is There A Payback? Pharmaceutical companies gave at least $116 million to patient advocacy groups in a single year, reveals a new database logging 12,000 donations from large publicly traded drugmakers to such organizations. 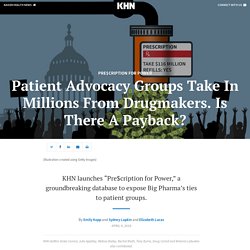 Even as these patient groups grow in number and political influence, their funding and their relationships to drugmakers are little understood. Unlike payments to doctors and lobbying expenses, companies do not have to report payments to the groups. The database, called “Pre$cription for Power,” shows that donations to patient advocacy groups tallied for 2015 — the most recent full year in which documents required by the Internal Revenue Service were available — dwarfed the total amount the companies spent on federal lobbying. The 14 companies that contributed $116 million to patient advocacy groups reported only about $63 million in lobbying activities that same year. Fiercehealthcare. SEC charges Theranos CEO Elizabeth Holmes with fraud. Elizabeth Holmes once promised to revolutionize the multibillion-dollar blood testing industry with innovative finger-prick tests she said would deliver results quickly, painlessly, and cheaply. 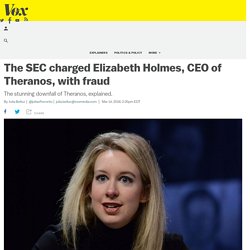 Bjsm.bmj. The More Lavish the Gifts to Doctors, the Costlier the Drugs They Prescribe. The pressure of Big Pharma: Financial conflicts of interest common on medical guideline panels - The Globe and Mail. When the Anxiety Disorders Association of Canada set out to craft the official guidelines for managing anxiety, post-traumatic stress and obsessive-compulsive disorders, the non-profit organization recruited six top psychiatrists to lead the effort. 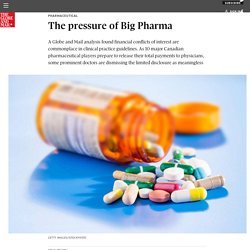 Those psychiatrists, in turn, approached their contacts in the pharmaceutical industry with a request: Will your company help pay for the development of our guidelines? Nine drug makers, including the companies that make the antidepressants Prozac, Zoloft and Paxil, put up a total of $205,000, most of which went to cover flights, meals and Toronto hotel rooms for a meeting of the executive committee and to pay the salaries of two medical writers who helped research and draft the final guideline paper. Story continues below advertisement. The corruption of modern academic medicine — How your doctor was bought. Many doctors are genuinely puzzled why much of the general public does not trust what they say. 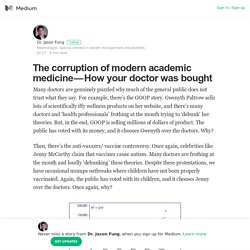 For example, there’s the GOOP story. Gwenyth Paltrow sells lots of scientifically iffy wellness products on her website, and there’s many doctors and ‘health professionals’ frothing at the mouth trying to ‘debunk’ her theories. e016701. Following the Script: How Drug Reps Make Friends and Influence Doctors. The Specialists’ Stranglehold on Medicine - NYTimes.com. Open Pharma wants public to know ties between MDs and pharmaceutical industry. If you live in the United States, you can easily find out if your doctor receives payments from drug companies. Ditto if you live in Australia, Japan, the United Kingdom, France, Denmark and many other European countries.

But not Canada. This country is seen as an international “laggard” when it comes to transparency about financial ties between the pharmaceutical industry and physicians. But there is a growing chorus of voices demanding change in the name of quelling concerns about conflicts of interest in the marketing, prescription and study of drugs. A new national campaign is being launched calling on the federal government to mandate public disclosure of all payments and transfers of value — for example, gifts and meals — from drug makers to doctors.

Doctors charging both government and patients privately in illegal double-dipping practice - The Globe and Mail. Rosalia Guthrie is still astounded that it cost her $4,350 to get her shoulder injury assessed by a surgeon who works in Canada’s public health-care system. She had been waiting in agony for 16 months to see Dr. Doctor’s pharma links raise fears of bias on opioid panel - The Globe and Mail. Officials overseeing new national standards for prescribing opioids did not honour a pledge to exclude medical experts who receive income from drug companies from voting on the measures. Sol Stern, a family doctor in Oakville, Ont., and one of 13 panel members who voted on the standards, has been a paid speaker and advisory board member for drug companies, including the pharmaceutical giant whose pain pill triggered Canada’s deadly opioid epidemic, according to his declaration form posted online last week.

Jason Busse, an associate professor at McMaster University’s department of anesthesia and co-lead of the group that drafted the standards, said the group made an exception for Dr. Stern because his industry-sponsored talks represented a “balanced approach” to opioids. Dr. American Health Care's "Original Sin" - HealthCommentary : HealthCommentary. Posted on | May 17, 2017 | 2 Comments Mike Magee. What Do Patients Think About Physicians’ Conflicts of Interest? Medical conflicts of interest were perfectly evident to patients long before anyone took an active interest in revealing them. These conflicts have been obvious from the moment the first physician accepted the first coin to enter the first plague-stricken home and do what little could be done. Some are the moral dilemmas inherent in medical practice, a profession an ethicist described in 1983 as “an incessant conflict” between self-interest and altruism.1 This tension is clearly visible to patients in a score of mundane details: one physician is exhausted but refuses to go home, another is needed to provide care but leaves for vacation anyway.

CHICAGO - As little as one free meal from a drug company can influence which medicines doctors prescribe for Medicare patients, according to a study using Medicare records and recently released data from the health care law's Open Payments program. The study highlights the subtle ways doctors may feel inclined to prescribe a drug after receiving just a small gift, even if the drug is more costly for patients and their insurance plans, the study authors said.

This Viewpoint explores the topic of overtreatment and its ethical and financial effects on health care and contribution to waste in the health care system. Health care in the United States is in a state of significant transition. With health care expenditures approaching $3 trillion, substantial attention has been focused on waste in the system. Backlash against “pinkwashing” of breast cancer awareness campaigns. Contributors to primary care guidelines. Last Week Tonight with John Oliver: Marketing to Doctors (HBO) Why the Ethics of Parsimonious Medicine Is Not the Ethics of RationingThe Ethics of Parsimonious Medicine. Web of industry, advocacy, and academia in the management of osteoporosis.