Situational Ethics And God. Cities of Refuge. Peter Singer: ‘World’s most dangerous man’ or hero of morality? Peter Singer speaking at a Veritas Forum event on the Massachusetts Institute of Technology campus, March 2009. 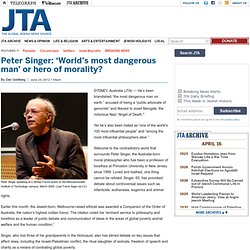 (Joel Travis Sage via CC) SYDNEY, Australia (JTA) — He’s been brandished “the most dangerous man on earth,” accused of being a “public advocate of genocide” and likened to Josef Mengele, the notorious Nazi “Angel of Death. " Yet he’s also been hailed as “one of the world’s 100 most influential people” and “among the most influential philosophers alive.” Welcome to the contradictory world that surrounds Peter Singer, the Australia-born moral philosopher who has been a professor of bioethics at Princeton University in New Jersey since 1999.

Biblical Slavery. Deuteronomy's legal treatment of slavery is more humane than the parallel laws in Exodus, and more practical than those in Leviticus. 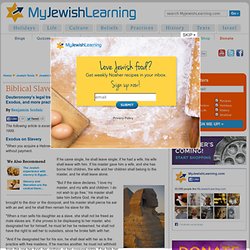 The following article is excerpted with permission from Conservative Judaism, volume 51:3, Spring 1999. Exodus on Slavery "When you acquire a Hebrew slave, he shall serve six years; in the seventh year he shall go free, without payment. We Also Recommend If he came single, he shall leave single; if he had a wife, his wife shall leave with him. "But if the slave declares, 'I love my master, and my wife and children: I do not wish to go free,' his master shall take him before God. "When a man sells his daughter as a slave, she shall not be freed as male slaves are.

"And if he designated her for his son, he shall deal with her as is the practice with free maidens. "When a man strikes his slave, male or female, with a rod, and he dies there and then, he must be avenged. Shabbat as a Reminder of the Exodus. Connecting the commandment to observe the Sabbath with the Israelites' rescue from Egyptian slavery, the Torah makes Shabbat a symbol of compassion and humane treatment for those in need of liberation. 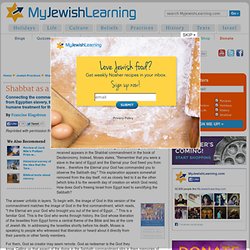 Reprinted with permission from The Fourth Commandment, published by Bell Tower. Exodus or Creation? No mention of creation or God resting or the blessing the Sabbath received appears in the Shabbat commandment in the book of Deuteronomy. Instead, Moses states, "Remember that you were a slave in the land of Egypt and the Eternal your God freed you from there... therefore the Eternal your God has commanded you to observe the Sabbath day. " This explanation appears somewhat removed from the day itself, not as closely tied to it as the other [which links it to the seventh day of creation on which God rests].

The answer unfolds in layers. For them, God as creator may seem remote. 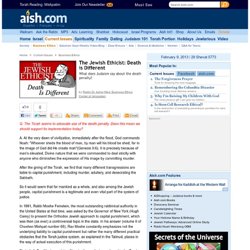 Would You Kill Baby Hitler (And Other Psychopathic Musings)? Why do cold-hearted psychopaths make good surgeons and world leaders? 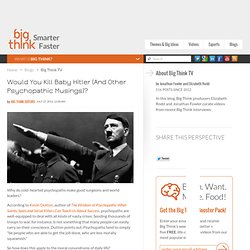 According to Kevin Dutton, author of The Wisdom of Psychopaths: What Saints, Spies and Serial Killers Can Teach Us About Success, psychopaths are well-equipped to deal with all kinds of nasty crises. Sending thousands of troops to war, for instance, is not something that many people can easily carry on their conscience, Dutton points out. Psychopaths tend to simply "be people who are able to get the job done, who are less morally squeamish. " Jewish Ethics, from Ancient Bible to Modern Bus  The next time someone tells you that ethical behavior doesn't need a foundation in religious teaching, step onto an Israeli bus (it doesn't have to be the gender-segregated variety) or open a mass-circulation Israeli newspaper and see how religion puts Jewish ethics on steroids. 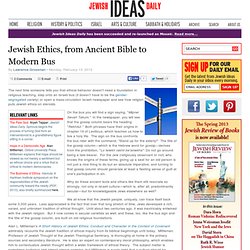 The Pale GodAryeh Tepper, Jewish Ideas Daily. Spinoza begins the process of turning God from an interventionist to a grandfatherly figure sitting in a corner. Hope in a Democratic AgeAlan Mittleman, Oxford University Press. Mittleman explains that hope should be viewed as not merely a sentiment but an ethical choice and a virtue that is critical to modern democracies. The Values of Jewish Texts. How study leads to increased sensitivity to morality In the following article, the author describes his opinions on how Jewish text study can lead the student to live a more moral life. 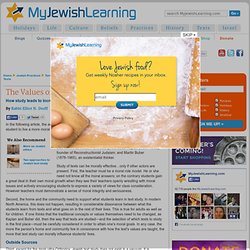 We Also Recommend In doing so, he makes reference to three modern theologians: Samson Raphael Hirsch (1808-1888), founder or neo-Orthodoxy, also known as modern Orthodoxy; Mordecai Kaplan (1881-1983), founder of Reconstructionist Judaism; and Martin Buber (1878-1965), an existentialist thinker. Study of texts can be morally effective…only if other actors are present. First, the teacher must be a moral role model. Second, the home and the community need to support what students learn in text study. Outside Sources Third, except for the most ultra-Orthodox, Jewish text study does not exist in a vacuum. Jewish Ethics: Some Basic Concepts and Ideas. The biblical text and the rabbinic tradition provide the universal search for an ethical life with passion and some unique concepts. 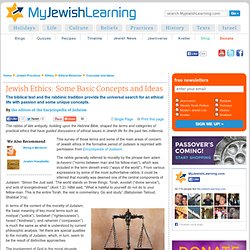 The rabbis of late antiquity, building upon the Hebrew Bible, shaped the terms and categories of practical ethics that have guided discussions of ethical issues in Jewish life for the past two millennia. Jews and Stealing. The ways we justify theft cannot free us of its corrupting influence. 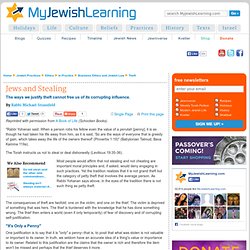 Reprinted with permission from A Book of Life (Schocken Books). "Rabbi Yohanan said: When a person robs his fellow even the value of a perutah [penny], it is as though he had taken his life away from him, as it is said, 'So are the ways of everyone that is greedy of gain, which takes away the life of the owners thereof' (Proverbs 1:19)" (Babylonian Talmud, Bava Kamma 119a). The Torah instructs us not to steal or deal dishonestly (Leviticus 19:35-36). We Also Recommend Most people would affirm that not stealing and not cheating are important moral principles and, if asked, would deny engaging in such practices.

Jewish Gangsters. Jewish gangsters rode organized crime out of the ghetto to a life of violence and crime. 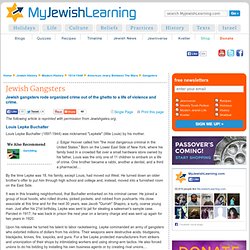