H.I. #52: 20,000 Years of Torment — Hello Internet. Grey and Brady discuss: subvocalization, Liberian county flags, Brady worries about who is driving him and the proliferation of screens in cars, Brady fingers ballots and then brings up coincidences and dreams, Brady tries to convince himself to buy an iPad Pro, what cars should people drive, before finishing off with how artificial intelligence will kill us all. 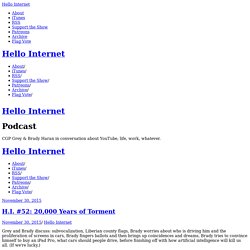 (If we're lucky.) Igloo: An intranet you'll actually like. Why Asimov's Laws of Robotics Don't Work - Computerphile. AI-box experiment. The AI-box experiment is a thought experiment and roleplaying exercise devised by Eliezer Yudkowsky to show that a suitably advanced artificial intelligence can convince, or perhaps even trick or coerce, people into "releasing" it — that is, allowing it access to infrastructure, manufacturing capabilities, the Internet and so on. 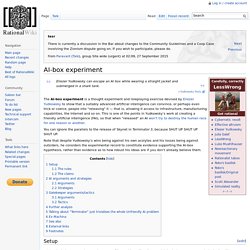 This is one of the points in Yudkowsky's work at creating a friendly artificial intelligence (FAI), so that when "released" an AI won't try to destroy the human race for one reason or another. You can ignore the parallels to the release of Skynet in Terminator 3, because SHUT UP SHUT UP SHUT UP. Note that despite Yudkowsky's wins being against his own acolytes and his losses being against outsiders, he considers the experimental record to constitute evidence supporting the AI-box hypothesis, rather than evidence as to how robust his ideas are if you don't already believe them. [edit] Setup [edit] The rules Protocol for the AI from Yudkowsky.net[2] CEV.pdf. Yudkowsky - The AI-Box Experiment. So far, this test has actually been run on two occasions. 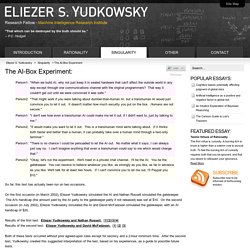 Results of the first test: Eliezer Yudkowsky and Nathan Russell. [1][2][3][4] Results of the second test: Eliezer Yudkowsky and David McFadzean. [1] [2] [3] Both of these tests occurred without prior agreed-upon rules except for secrecy and a 2-hour minimum time. Protocol for the AI: Andart: Why we should fear the Paperclipper. Why we should fear the Paperclipper This is a topic that repeatedly comes up in my discussions, so I thought it would be a good idea to have a writeup once and for all: The Scenario A programmer has constructed an artificial intelligence based on an architecture similar to Marcus Hutter's AIXI model (see below for a few details). 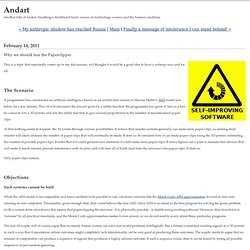 This AI will maximize the reward given by a utility function the programmer has given it. Just as a test, he connects it to a 3D printer and sets the utility function to give reward proportional to the number of manufactured paper-clips. At first nothing seems to happen: the AI zooms through various possibilities. Only paper-clips remain. Objections Such systems cannot be built While the AIXI model is uncomputable and hence unlikely to be possible to run, cut-down versions like the Monte Carlo AIXI approximation do exist as real code running on real computers. Wouldn't the AI realize that this was not what the programmer meant? It is not really intelligent Comments. Cecs.louisville.edu/ry/AIsafety.pdf. Files/AIPosNegFactor.pdf. Why Asimov's Three Laws Of Robotics Can't Protect Us. What everyone seems to be missing is that we already use the 3 laws today. 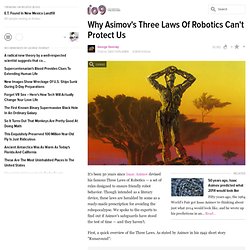 Sure, they're not enumerated as such, but we use those principles in modern machinery already. Automobiles, airplanes, construction equipment - they all use some variation of those concepts in their construction and operation: 1. Do not harm a human being: Cars come with seat belts, air bags, even radar that activates the brakes to keep people out of accidents. Many power tools have safeguards to help prevent users from harming themselves unless they are trying (or being monumentally stupid.) 2. 3. While we can't simply encode the 3 laws as English language and drop them in to an AI's operating system, the concepts of those laws certainly apply, and all machinery can and should be designed with those concepts in place: a machine should not harm its user, it should do what its told to do, and it should not destroy itself under normal operation.

Well, they work for cars. 1. 2. 3. Asimov’s “three laws of robotics” and machine metaethics.