How to bring better ethics to data science. iStock In the waning months of the Bloomberg administration, I worked for a time in a New York City Hall data group within the Health and Human Services division. 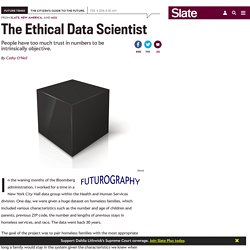 Are ancient buildings as important as human lives? The destruction of beautiful historic buildings in Yemen has provoked an online debate, with people asking if buildings are being valued more than human lives. 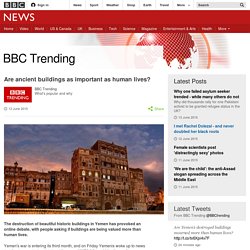 Yemen's war is entering its third month, and on Friday Yemenis woke up to news that five houses in the old city of Sanaa, a UNESCO world heritage site, were allegedly hit by a Saudi-led coalition airstrike (Saudi Arabia has denied the claims). The houses, as well as being historic, were also inhabited and the incident killed five people and injured several others. Online, there was much mourning for the people - but seemingly just as much for the destroyed buildings. "This heritage bears the soul of the Yemeni people, it is a symbol of a millennial history of knowledge and it belongs to all humankind," UNESCO said in a statement. Scientists Alter DNA in Human Embryos. 1 in 3 Dutch MDs Willing to Aid in Assisted Suicide for Mentally Ill.

A recent survey suggests that a significant proportion of doctors in the Netherlands are prepared to carry out assisted suicide for people with mental illness. 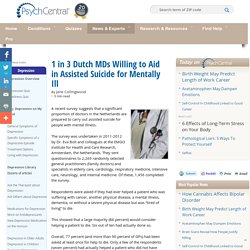 The survey was undertaken in 2011-2012 by Dr. Eva Bolt and colleagues at the EMGO Institute for Health and Care Research, Amsterdam, the Netherlands. They sent questionnaires to 2,269 randomly selected general practitioners (family doctors) and specialists in elderly care, cardiology, respiratory medicine, intensive care, neurology, and internal medicine. Of these, 1,456 completed the survey. Respondents were asked if they had ever helped a patient who was suffering with cancer, another physical disease, a mental illness, dementia, or without a severe physical disease but was “tired of living” to die. This showed that a large majority (86 percent) would consider helping a patient to die.

Overall, 77 percent (and more than 90 percent of GPs) had been asked at least once for help to die. Gender Differences in Moral Reasoning Rooted in Emotion. When faced with a moral dilemma — for example, is it OK for a police officer to torture an alleged bomber to find hidden explosives that could kill many people — men are typically more willing to say yes for the sake of the greater good, according to a new study. 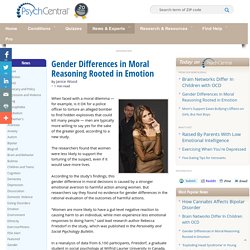 The researchers found that women were less likely to support the torturing of the suspect, even if it would save more lives. According to the study’s findings, this gender difference in moral decisions is caused by a stronger emotional aversion to harmful action among women. But researchers say they found no evidence for gender differences in the rational evaluation of the outcomes of harmful actions. “Women are more likely to have a gut-level negative reaction to causing harm to an individual, while men experience less emotional responses to doing harm,” said lead research author Rebecca Friesdorf in the study, which was published in the Personality and Social Psychology Bulletin.

Science and Even Sci-Fi Make Us Better People. Michael Shermer is the editor of Skeptic magazine and the author of over a dozen books, including The Moral Arc, which argues science and reason are responsible for most of humanity’s moral progress. 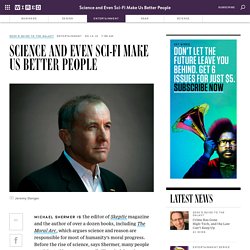 Before the rise of science, says Shermer, many people participated in grotesque evils like witch burning simply because they lacked a reliable method for identifying false beliefs. “The great scientific revolutionaries like Copernicus, Kepler, Galileo, and Newton discovered that the universe is governed by natural laws that can be understood and applied to social problems, political problems, economic problems, and moral issues,” Shermer says in Episode 141 of the Geek’s Guide to the Galaxy podcast. He also notes that literature plays an important role in improving people’s behavior.

Recent studies suggest that those who read fiction become better at understanding and empathizing with others, particularly when those stories involve characters and cultures that are different or unfamiliar. » ‘Racist Sounding’ Bird Names Banned in Sweden Alex Jones' Infowars: There's... GCHQ chief accuses US tech giants of becoming terrorists' 'networks of choice' Privacy has never been “an absolute right”, according to the new director of GCHQ, who has used his first public intervention since taking over at the helm of Britain’s surveillance agency to accuse US technology companies of becoming “the command and control networks of choice” for terrorists. 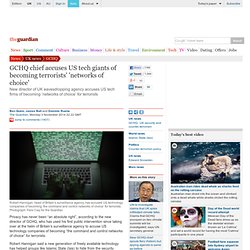 Robert Hannigan said a new generation of freely available technology has helped groups like Islamic State (Isis) to hide from the security services and accuses major tech firms of being “in denial”, going further than his predecessor in seeking to claim that the leaks of Edward Snowden have aided terror networks. GCHQ and sister agencies including MI5 cannot tackle those challenges without greater support from the private sector, “including the largest US technology companies which dominate the web”, Hannigan argued in an opinion piece written for the Financial Times just days into his new job. 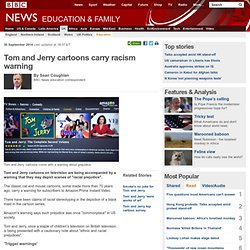