Is your satnav harming your brain? Scientists warn over-use of modern technology may be linked to memory loss and depression in later life. Modern technology has taken the strain off our brainsGrowing scientific evidence suggests our brains may prematurely failBy using satnavs, we wither away our 'caveman' ability By John Naish for the Daily Mail Published: 00:12 GMT, 3 March 2015 | Updated: 04:20 GMT, 4 March 2015. 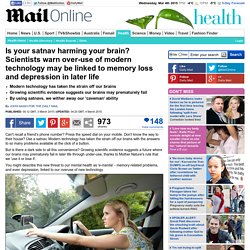 Deus Ex: The Eyeborg Documentary. If You See Something, Text Something. Engrossed by their smartphones, passengers on a San Francisco Muni train didn’t notice a man on board brandishing a pistol until he had shot and killed a student. 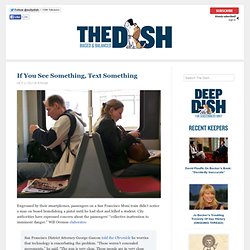 City authorities have expressed concern about the passengers’ “collective inattention to imminent danger.” Will Oremus elaborates: San Francisco District Attorney George Gascon told the Chronicle he worries that technology is exacerbating the problem. Trying to Hit the Brake on Texting While Driving. Photo People know they shouldn’t text and drive. 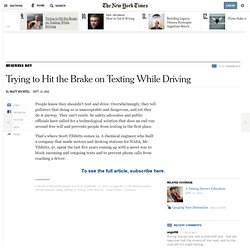 Overwhelmingly, they tell pollsters that doing so is unacceptable and dangerous, and yet they do it anyway. How Not to Be a Jerk With Your Stupid Smartphone. As technology expands our communicative reach, new opportunities to be rude inevitably arise. 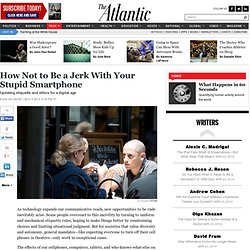 Some people overreact to this incivility by turning to uniform and mechanical etiquette rules, hoping to make things better by constraining choices and limiting situational judgment. But for societies that value diversity and autonomy, general mandates—like expecting everyone to turn off their cell phones in theaters—only work in exceptional cases. The effects of our cellphones, computers, tablets, and who-knows-what-else on the domestic sphere has become a major cause of concern. Some worry that friends and family are rude to each other, glued as they are to their mobile phones, each alone, together. A popular remedy revolves around a simple game: When you meet up with folks you care about, everyone should put their phones in a stack, and either not retrieve them until the gathering ends, or else pay a penalty for early use, like picking up a dinner bill. Swindlers Use Telephones, With Internet’s Tactics. Photo SEATTLE — Phone swindles are practically as old as the telephone itself. 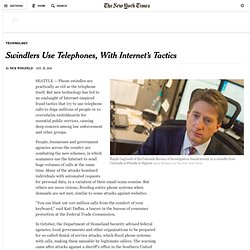 But new technology has led to an onslaught of Internet-inspired fraud tactics that try to use telephone calls to dupe millions of people or to overwhelm switchboards for essential public services, causing deep concern among law enforcement and other groups. People, businesses and government agencies across the country are combating the new schemes, in which scammers use the Internet to send huge volumes of calls at the same time. Many of the attacks bombard individuals with automated requests for personal data, in a variation of their email-scam cousins. But others are more vicious, flooding entire phone systems when demands are not met, similar to some attacks against websites.

“You can blast out 100 million calls from the comfort of your keyboard,” said Kati Daffan, a lawyer in the bureau of consumer protection at the Federal Trade Commission. Michael J. Continue reading the main story. I Forgot My Phone. PSA Texting while Driving U.K. Ad. "From One Second To The Next" Documentary - It Can Wait. An online Magna Carta: Berners-Lee calls for bill of rights for web. The inventor of the world wide web believes an online "Magna Carta" is needed to protect and enshrine the independence of the medium he created and the rights of its users worldwide. 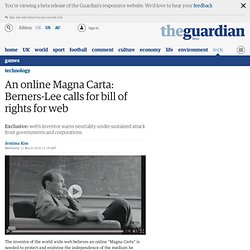 Sir Tim Berners-Lee told the Guardian the web had come under increasing attack from governments and corporate influence and that new rules were needed to protect the "open, neutral" system. Speaking exactly 25 years after he wrote the first draft of the first proposal for what would become the world wide web, the computer scientist said: "We need a global constitution – a bill of rights. " Berners-Lee's Magna Carta plan is to be taken up as part of an initiative called "the web we want", which calls on people to generate a digital bill of rights in each country – a statement of principles he hopes will be supported by public institutions, government officials and corporations.

Principles of privacy, free speech and responsible anonymity would be explored in the Magna Carta scheme. A Digital Detox Test: Unplug Twitter and Facebook. Put Off Email and Smartphone. Photo At first blush I may not seem like a prime candidate for a digital detox. 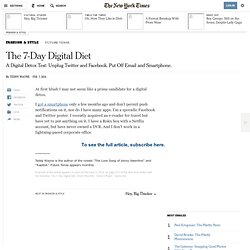 I got a smartphone only a few months ago and don’t permit push notifications on it, nor do I have many apps. I’m a sporadic Facebook and Twitter poster. I recently acquired an e-reader for travel but have yet to put anything on it. Ariel Levy: Was Justice Served in Steubenville? One Saturday last August, a sixteen year-old girl in West Virginia did something that teen-agers do: she told her parents that she was sleeping at another girl’s house, across the Ohio River, and then, after her mother dropped her off there, she and a few friends headed into the hot summer night to a party. 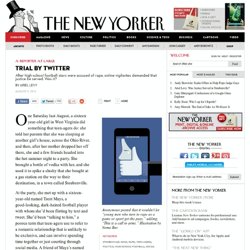 Social media fuel Britain riots, authorities say. Dealing With Digital Cruelty. Photo ANYONE who has ever been online has witnessed, or been virtually walloped by, a mean comment. 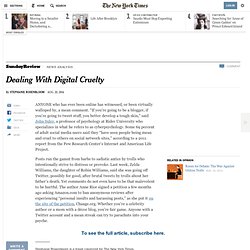 “If you’re going to be a blogger, if you’re going to tweet stuff, you better develop a tough skin,” said John Suler, a professor of psychology at Rider University who specializes in what he refers to as cyberpsychology. Some 69 percent of adult social media users said they “have seen people being mean and cruel to others on social network sites,” according to a 2011 report from the Pew Research Center’s Internet and American Life Project. The Anatomy Of An Internet Rumor. By Chas Danner Last week a design company in Sweden did an experiment to study the effect of rumor on the Internet. 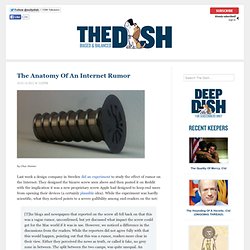 They designed the bizarre screw seen above and then posted it on Reddit with the implication it was a new proprietary screw Apple had designed to keep end users from opening their devices (a certainly plausible idea). A Gossip App Brought My High School to a Halt. Tyler Clementi’s Suicide and Dharun Ravi’s Trial. Dharun Ravi grew up in Plainsboro, New Jersey, in a large, modern house with wide expanses of wood flooring and a swimming pool out back. Assertive and athletic, he used “DHARUNISAWESOME” as a computer password and played on an Ultimate Frisbee team. At the time of his high-school graduation, in 2010, his parents bought space in the West Windsor and Plainsboro High School North yearbook. “Dear Dharun, It has been a pleasure watching you grow into a caring and responsible person,” the announcement said. How conspiracy theories emerge on Facebook — NOVA Next. Chemtrails. HAARP. I Liked Everything I Saw on Facebook for Two Days. Here’s What It Did to Me.