Did You Know Archive & 15 Fun Facts you probably didn't know 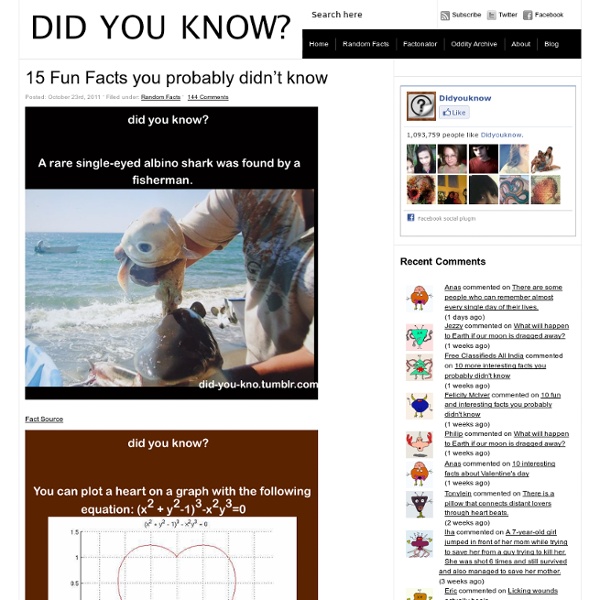 Dyatlov Pass incident The Dyatlov Pass incident (Russian: Гибель тургруппы Дятлова) is the mysterious deaths of nine ski hikers in the northern Ural Mountains on February 2, 1959. The experienced trekking group, who were all from the Ural Polytechnical Institute, had established a camp on the slopes of Kholat Syakhl when disaster struck. During the night something made them tear their way out of their tents from the inside and flee the campsite inadequately dressed in heavy snowfall and sub-zero temperatures. Soviet investigators determined that six victims died from hypothermia but others showed signs of physical trauma. One victim had a fractured skull while another had brain damage but without any sign of distress to their skull. Additionally, a female team member had her tongue missing.

UCB Parents Jokes &Quotes: Kids talk Science - StumbleUpon This page is brought to you by UC Berkeley Parents Network Back to the Jokes & Quotes Collection THE FOLLOWING ARE ALL QUOTES FROM 11 YEAR OLDS' SCIENCE EXAMS: * "Water is composed of two gins, Oxygin and Hydrogin. Oxygin is pure gin. Hydrogin is gin and water." * "Artificial insemination is when the farmer does it to the cow instead of the bull." * "When you breathe, you inspire. When you do not breathe, you expire." * "H20 is hot water, and CO2 is cold water." * "Three kinds of blood vessels are arteries, vanes, and caterpillars." * "Dew is formed on leaves when the sun shines down on them and makes them perspire." * "Mushrooms always grow in damp places and so they look like umbrellas." * "The body consists of three parts - the brainium, the borax and the abominable cavity.

Did You Know Archive & 14 fun facts you probably didn't know Source Source Source Some other swear slangs were FLOGGING CULLY. A debilitated lecher, commonly an old one. 10 of the Greatest Unsolved Mysteries The last hundred years have borne witness to humankind’s extraordinary technological advancements. Man has walked on the moon, ventured deeper into the oceans than ever before and even uncovered the building blocks of life, DNA. But even with our inexorable progress as a species there are still mysteries and enigmas the solutions to which elude us. Below is a selection of 10 of the most puzzling mysteries in history.

Did You Know Archive & 10 interesting facts you probably didn't know - StumbleUpon Fact Source It’s called Paternoster. Fact Source Fact Source Quit Complaining About Your Job ThreatTrack was established in 1994 as Sunbelt Software Inc. to provide best-of-breed security solutions to the rapidly growing Windows user base. For the next decade, the company created a broad array of security solutions for consumers, businesses and large enterprises, including its popular CounterSpy anti-spyware software, iHateSpam email security product and the CWSandbox (now ThreatAnalyzer) automated malware analysis sandbox. In 2008, the company launched its VIPRE antivirus product line. VIPRE combined anti-malware and anti-spyware into a single, small-footprint antivirus solution designed to provide comprehensive malware protection to users without slowing down their PCs or networks. Sunbelt Software was acquired by GFI Software Inc., in 2010, becoming the GFI Software Security Business Unit. GFI Software announced plans to spin off its Security Business Unit in 2013, when ThreatTrack began operations as an independent company.

25 Quotes on Humor Humor really is our saving grace, and it helps keep us psychologically healthy. 25 Quotes on Humor - Part 2 can be found here: Part 2 "Laugh as much as possible, always laugh. It's the sweetest thing one can do for oneself & one's fellow human beings." - Maya Angelou "A good laugh makes any interview, or any conversation, so much better." - Barbara Walters "He who laughs, lasts." - Mary Pettibone Poole Some Bizzare and Odd things around us... Beauty of the nature lies in viewer’s eyes. A photograph is just a way to show or represent that beauty. Here is a bunch of some wonderful pictures which are not only the example of beautiful photography but are also a photograph of some miracles happening in the world. You can also call it the creativity and innovation of photographer’s mind.