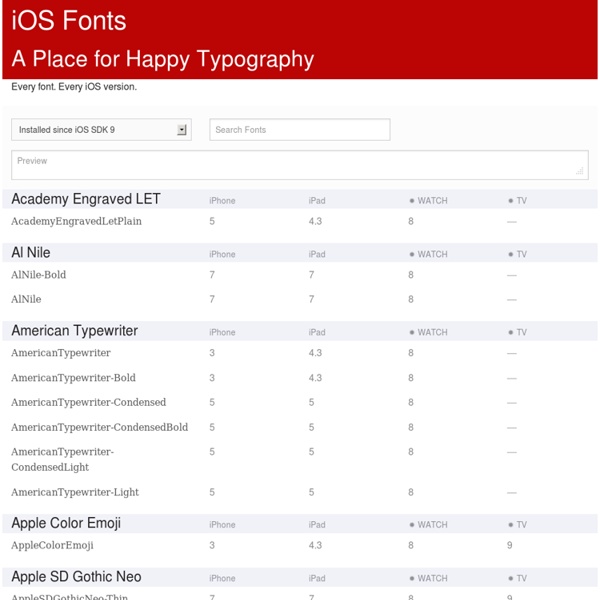 How To Design A Gorgeous Big UI Button In Photoshop In this tutorial we’re going to be creating a gorgeous and modern user interface button suitable for the web or a mobile interface design. We’ll be using a handful of Photoshop techniques that are bound to come in handy for more than just creating buttons; in fact, the techniques we’ll be using are often used in most UI elements. Step 1 Create a new Photoshop document (I’ve used a 1000×1000 pixel RGB 72dpi document for this tutorial – keep in mind this will need to be a high resolution if you’re designing for a mobile device with a high resolution display such as an iPhone 4). Fill your background layer with a color of your choice, I used this lovely mid-blue color. To add a nice little bit of texture to our background I’m using a lovely vintage-style photograph of a cloud.

UIColor: Understanding Colour in iOS Something as trivial as changing a colour or adding a colour should be pretty simple to achieve, one that shouldn’t take long to do or much thinking. Sadly with iOS this isn’t as straight forward as you assume at first and because of this i thought i would throw together a really simple tutorial explaining how colours work. This really is the most basic tutorial i can think of, i mean i think someone who’d recently suffered a massive head injury could come to terms with UIColor on iOS after this tutorial. Convert OpenType Font => Woff Web Font Can you imagine free web hosting service that has 99.9% uptime? Too good to be true? No more! 000webhost.com has made the revolution, forget the stereotype that free hosting is unreliable.. Here is the proof: uptime stats of 20 servers.

Designing for iPhone 4's Retina Display So, um, maybe you heard: there’s a new iPhone out. For my money (and I shelled out plenty for it), the phone’s best feature is the new “Retina display,” the eye-popping high-resolution screen. Everything they say about it is true: at 320 ppi, the pixels are just plain invisible. The crisp bright screen really looks as good as print, absolutely gorgeous. But what soothes the eye also adds headaches for designers. Vorspeisen auf iOS-Design-Guide As someone who does work on both the development and design side of iOS apps I find that many designers struggle with the transition to UI work, or with the different processes involved in iPhone and iPad app design. In this guide I'll describe the deliverables you'll be expected to produce, outline the constraints of the medium and introduce fundamental iOS and UI design concepts. The Medium

45 iPad iOS Interface Showcase - Inspiration Apple released the new ipad few weeks ago and within a week, it reached 3 million sales! That’s a staggering amount of iPad being sold. With such a huge consumer based, it’s no brainer to say that the iOS apps demand will certainly increase dramatically. Sizes of iPhone UI Elements How to detect the current device size and kind Other dimensions common to all screen sizes: Points vs. Pixels

Controlling Web Typography Lettering.js was built to solve a problem. As web typography improves, web designers want the same level of control print designers have. Just as we’ve moved beyond Helvetica and Times New Roman, we’ve begun to think about web type in finer detail than <h1>or <span> tags currently (semantically) allow. For example, when Dave Rupert and I prepared to markup the 3 sites for the Lost World’s Fairs project, we saw elements in each design that would require an excessive number of <span> tags to target words, even letters, at a time. Ideally, CSS selector pseudo classes or elements would work, but even with options like :nth-child and ::first-letter we wouldn’t be able to target all that we needed. As eager as we were to dive into building these beautifully designed pages, we couldn’t help but realize two things:

Designing for the Retina Display (326ppi) For three generations of the iPhone, Apple kept the screen consistent (320x480 pixels and 3.5 inches diagonal). But now Apple's new iPhone 4 boasts the "highest resolution phone screen ever (960x640 pixels, 3.5 inches diagonal, & an 800:1 contrast ratio)." What's the impact to designers? But first, why is it an issue? Designing Icons - 35 tutorials Every person who is using internet must watch the icons, because icons are the part and parcel of every site and we can say that icons also make some extra attraction in your site. Icons not only play an important role for a website but also in many fields of the graphics designing. If you are also a designer then today I am going to provide you something interesting and valuable, so now for your icon designing isn’t a big deal you can easily improve your designing skills, below you can see the 35 creative and useful tutorials for all the people who want to have icon designing skills at their finger tips. USB Hard Drive Device Icon – Photoshop Tutorial

Transitional Interfaces — Design/UX Designers love to sweat the details. Much time is spent pixel-fucking buttons, form styles, setting type, & getting those icons as sharp as a tack. A+, great job, don't stop you guys. ...but there's little consideration about how it all fits together outside of a static comp. Targeting the iPhone 4 Retina Display with CSS3 Media Queries - WaltPad Four years ago, (eight months before the original iPhone was announced) Dave Hyatt wrote about high DPI web sites on the Surfin’ Safari blog: One area of Web design that is going to become more important in the coming years is high DPI. For those of us working on WebKit, this will also become an issue for WebKit applications and for Dashboard widgets.

50 tips for designing brilliant iOS apps 1 A touchscreen interface might be flexible and intuitive, but it’s not perfect. Consider what people are doing while they’re using your app, and how they’re holding the device. Remember that fingers cover a much greater area than you might expect, and are far from accurate at selecting items. 2 Take a device-centric approach to design: don’t just think about the size of the screen, but also where and when it will be used. Designing For The Empty States Understand how to add some delight into an app by designing the empty states and give users a better experience. Empty states are places in apps that have no content or data. They are empty. A blank page. Traditionally empty states are overlooked as most designers focus on how best to display lots of content or data.

Famous Jeff Menter loves this page too! :) by finneycanhelp Dec 11