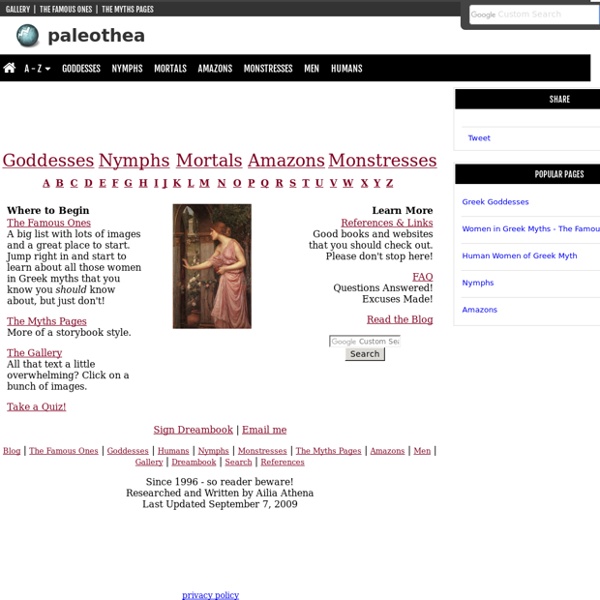 Heroes of History - The Heroic Monomyth As of July 1, 2013 ThinkQuest has been discontinued. We would like to thank everyone for being a part of the ThinkQuest global community: Students - For your limitless creativity and innovation, which inspires us all. Teachers - For your passion in guiding students on their quest. Grimm's Fairy Tales This book contains 209 tales collected by the brothers Grimm. The exact print source is unknown. The etext appears to be based on the translation by Margaret Hunt called Grimm's Household Tales, but it is not identical to her edition. (Some of the translations are slightly different, the arrangement also differs, and the Grimm's scholarly notes are not included.) The etext received by the Universal Library did not include story titles.

Lyssa Description[edit] She personifies mad rage and frenzy, as well as rabies in animals. In Herakles she is called upon by Hera to inflict the hero Heracles with insanity. In this scenario she is shown to take a temperate, measured approach to her role, professing "not to use [her powers] in anger against friends, nor [to] have any joy in visiting the homes of men." She counsels Iris, who wishes to carry out Hera's command, against targeting Heracles but, after failing to persuade, bows to the orders of the superior goddess and sends him into a mad rage that causes him to murder his wife and children.[1]

Isabella of France Isabella of France "No man ever excited her resentment who did not perish under its effect;the king himself forming no exception to this fact." Queen Isabella, the infamous "She-Wolf of France", was born in 1295 in... well, France. The daughter of the French King Philip le Bel and descended from the great Norman asskicker William the Conqueror, Isabella's destiny was to be far more exciting and bloody than that of most Medieval noblewomen – her crazy, insane life smashing peoples' asses across the British countryside would include giant booze-laden parties, face-crushing vengeance, and wild monkey sex, and by the time she was done she would be forever remembered as the only Queen of England to ever order the execution of the English King. Life started out innocuously enough for the young woman known as Isabella of France (or, alternately, Isabella the Fair).

Chronology The Turkic speaking Uighurs were one of many distinct cultural groups brought together by the trade of the Silk Route at Turfan in Chinese Central Asia. The Uighurs, primarily pastoral nomads, observed a number of religions including Manichaeism, Buddhism, and Nestorian Christianity. Many of the artefacts from this period were found in the 19 th century in this remote desert region of China. The Seljuks were another Central Asian nomadic group. They were the first Turkic dynasty to control Central Asia as far as the eastern Mediterranean.

The Very Secret Diaries Welcome! Here you may find the brilliant "Very Secret Diary" series by the wonderful Cassandra Claire. These are also published in her LiveJournal, but she was kind enough to agree to let your humble servant here publish them here. Enjoy! And do be sure to check out her LiveJournal. To receive email when ealasaid.com (which includes this site) is updated, please sign up for Ealasaid's mailing list. The Grigori The Watchers The Lord spoke: "Have no fear, Enoch, good man and scribe of goodness. Come hear my voice. Go speak to the Watchers of Heaven, who have sent you to intercede for them. Tell them, You should intercede for men, and not men for you. Why did you leave lofty, holy Heaven to sleep with women and, to defile yourselves with the daughters of men and take them as your wives, and like the children of the earth to beget sons, in your case giants?