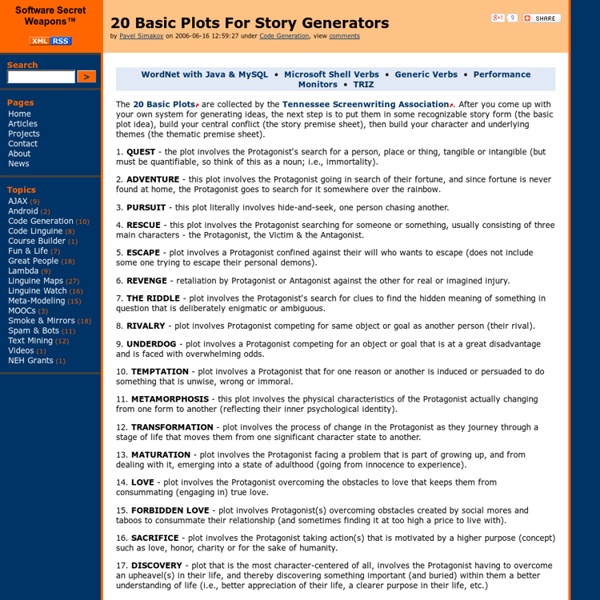 The 20 Basic Plots are collected by the Tennessee Screenwriting Association . After you come up with your own system for generating ideas, the next step is to put them in some recognizable story form (the basic plot idea), build your central conflict (the story premise sheet), then build your character and underlying themes (the thematic premise sheet). 1. QUEST - the plot involves the Protagonist's search for a person, place or thing, tangible or intangible (but must be quantifiable, so think of this as a noun; i.e., immortality). 2. 3. 4. 5. 6. 7. 8. 9. 10. 11. 12. 13. 14. 15. 16. 17. 18. 19. 20. (Note: Sometimes #19 & #20 are combined into rags-to-riches-to-rags (or vice versa) of a Protagonist who does (or doesn't) learn to deal with their dominating character trait). Looking At People Through Their Words illustrates the use of artificial intelligence and data mining for text analysis.

10 Ways To Stop Worrying And Start Writing by Dara Girard Many people claim that they want to write. Most won't because of a giant monster called FEAR. 102 Resources for Fiction Writing « Here to Create UPDATE 1/10: Dead links removed, new links added, as well as Revision and Tools and Software sections. Are you still stuck for ideas for National Novel Writing Month? Or are you working on a novel at a more leisurely pace? Here are 102 resources on Character, Point of View, Dialogue, Plot, Conflict, Structure, Outlining, Setting, and World Building, plus some links to generate Ideas and Inspiration.

Write & Get Paid Get Paid $100 Do you want to earn money online? Listverse was built on the efforts of readers just like you. Readers who didn’t have any experience as writers but decided to put a list together and send it in. So here is the deal: We will pay you $100 for your efforts. You don’t need to be an expert—you just need to have English equal to that of a native speaker, a sense of humor, and a love for things unusual or interesting. Fifteen Ways to Write a Novel Every year I get asked what I think about NaNoWriMo, and I don’t know how to answer, because I don’t want to say, “I think it makes you write a bad novel.” This is kind of the point. You’re supposed to churn out 50,000 words in one month, and by the end you have a goddamn novel, one you wouldn’t have otherwise. If it’s not Shakespeare, it’s still a goddamn novel. The NaNoWriMo FAQ says: “Aiming low is the best way to succeed,” where “succeed” means “write a goddamn novel.” I find it hard to write a goddamn novel.

Spice Up Your Writing With Dialogue by Judy Cullins Does your chapter sound like a report? Does it go on and on with past tense sentences that tell, rather than show? Wow! Women on Writing - An eZine for women writers, authors, editors, agents, publishers, and readers It can sometimes be helpful to make a Trait Chart for each character. This is especially helpful during the early stages of character development, before the character becomes as real to you as your mother. There are several charts of this sort available, some extremely detailed and some containing only facts and figures. I've tried to make one that includes the most important traits to help you visualize your character, both physically and emotionally. Words of Wisdom: 101 Tips from the World's Most Famous Authors » Online College Search If you've ever wanted to sit down with your favorite writer and ask advice, then you should take a look at these tips from some of the most famous authors in the world. These valuable bits of information provide guidance on strengthening your writing skills, becoming a better fiction writer or poet, learning to tap into your creativity, advice on education and school, and even a few suggestions on success and living a meaningful life. Of course, another excellent way of improving your writing is through traditional or online master’s degrees in creative writing.

50 Strategies For Making Yourself Work Written by Jerry Oltion Copyright © 2001 by Jerry Oltion Work avoidance is one of the major paradoxes of the writing profession. Generally, writers want to write (or want to have written), but all too often we find ourselves doing anything else but. We’ll mow lawns, do the dishes, polish silverware–anything to keep from facing the blank page. At the same time we know we eventually have to get to work, so we come up with all sorts of strategies for forcing ourselves to the keyboard.

9 Lists To Keep Updated, and Keep Handy I bought a Moleskine notebook a long time ago, and for a while it got zero use. My productivity system is totally digital and Web-based, as is my personal journal. I bought the Moleskine because it looked awesome, and because so many other people found it useful. The Moleskine, though, made its way into my pocket or backpack all the time, because of one simple use I found for it: a list manager. Not a list of things to do, or people to call – different lists. The Moleskine is my perfect list-manager, and that’s all I use it for.

What I've Learned From 10 Years Of Writing & Independent Publishing It’s been a long time since the writing bug first bit me. Before I started blogging seriously, I had always been writing fiction. In 2nd grade I wrote my first short-story. Kurt Vonnegut explains drama I was at a Kurt Vonnegut talk in New York a few years ago. Talking about writing, life, and everything. He explained why people have such a need for drama in their life. CHARACTER DEVELOPMENT: QUESTIONS FOR CREATING CHARACTER FACTS AND PERSONALITIES by Irene Watson An author who wants to create a realistic character needs to know everything possible about that character, not only to keep the facts straight, but also to understand that character's motivations. While critics often differentiate between a plot-driven and a character-driven story, a writer who does his or her work well will find that the character's motivations will drive the plot, and understanding the character's past is the key to understanding his or her motivations for the present and the future. Asking the character a series of questions not only helps to create a realistic character, but often the oddest or seemingly most random questions will result in new information about the character that can help a writer to overcome writer's block. Creating a character questionnaire for each major character can lead to richer fiction and greater focus.

Using Real Psychology in Your Writing Using Real Psychology in Your Writing Using Archetypes in Your Stories Writing Better Romantic Relationships This series looks at the Anima/Animus archetype, which is most often seen in romantic relationships, and how to use it to create more compelling romantic relationships, regardless of genre. Looks at what the anima and animus are, how they're formed, and why fiction writers need to understand them. How to Create an Instant Bestselling Novel How to Create an Instant Bestselling Novel by Cliff Pickover Please consider the following helpful tips. These will make it easier to get your stories or novels published. These tips will help you write good fiction in general. First, buy a National Geographic magazine. Page through it and select a setting.