Bad Day at Black Rock. The picture tells the story of a mysterious stranger who arrives at a tiny isolated town in a desert of the southwest United States in search of a man. 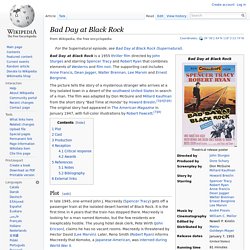 The film was adapted by Don McGuire and Millard Kaufman from the short story "Bad Time at Honda" by Howard Breslin.[3][4][5][6] The original story had appeared in The American Magazine in January 1947, with full-color illustrations by Robert Fawcett.[7][8] Plot[edit] Certain that something is wrong, Macreedy sees the local sheriff, Tim Horn (Dean Jagger), but the alcoholic lawman is clearly afraid of Smith and is impotent to help. The veterinarian and undertaker, Doc Velie (Walter Brennan), advises Macreedy to leave town immediately, but also lets slip that Komoko is dead. Pete's sister, Liz (Anne Francis), rents Macreedy a Jeep. Spencer Tracy as John J. Macreedy tries to telephone the state police, but Pete refuses to put the call through. Later, Macreedy and Doc Velie devise a plan for Macreedy to escape under the cover of darkness. In the Heat of the Night (film) The film won five Academy Awards, including the 1967 award for Best Picture. 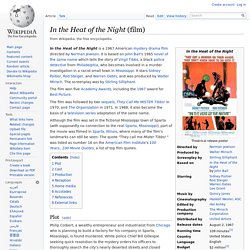 Although the film was set in the fictional Mississippi town of Sparta (with supposedly no connection to the real Sparta, Mississippi), part of the movie was filmed in Sparta, Illinois, where many of the film's landmarks can still be seen. The quote "They call me Mister Tibbs! " was listed as number 16 on the American Film Institute's 100 Years...100 Movie Quotes, a list of top film quotes.

Philip Colbert, a wealthy entrepreneur and industrialist from Chicago who is planning to build a factory for his company in Sparta, Mississippi, is found murdered. White police Chief Bill Gillespie seeking quick resolution to the mystery orders his officers to thoroughly search the city’s nearly deserted streets and closed businesses for anyone who might have seen or heard something; or, who is suspiciously outside in the middle of the night, in a small town where everyone goes to bed at sunset.

Academy Award wins Other awards. The Unconquerable (17) HiLoBooks is pleased to serialize Helen MacInnes’s 1944 novel The Unconquerable (later reissued as While We Still Live), an espionage adventure that pits an innocent English woman against both Nazis and resistance fighters in occupied Poland. 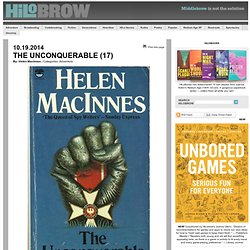 MacInnes, it’s worth noting, was married to a British intelligence agent, which may explain what one hears is the amazing accuracy of her story’s details. The Andromeda Strain. The Andromeda Strain (1969), by Michael Crichton, is a techno-thriller novel documenting the efforts of a team of scientists investigating the outbreak of a deadly extraterrestrial microorganism in Arizona that rapidly and fatally clots the blood in most humans, while inducing insanity in a small handful of others. 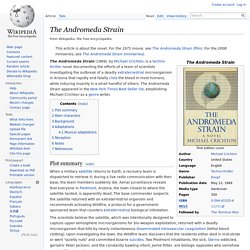 The Andromeda Strain appeared in the New York Times Best Seller list, establishing Michael Crichton as a genre writer. Plot summary[edit] When a military satellite returns to Earth, a recovery team is dispatched to retrieve it; during a live radio communication with their base, the team members suddenly die. Aerial surveillance reveals that everyone in Piedmont, Arizona, the town closest to where the satellite landed, is apparently dead. The base commander suspects the satellite returned with an extraterrestrial organism and recommends activating Wildfire, a protocol for a government-sponsored team that counters extraterrestrial biological infestation. Main characters[edit] Dr. The Ipcress File (film) The Ipcress File is a 1965 British espionage film directed by Sidney J. 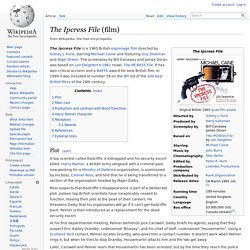 Furie, starring Michael Caine and featuring Guy Doleman and Nigel Green. The screenplay by Bill Canaway and James Doran was based on Len Deighton's 1962 novel, The IPCRESS File. It has won critical acclaim and a BAFTA award for best British film. In 1999 it was included at number 59 on the BFI list of the 100 best British films of the 20th century. Ross suspects that Radcliffe's disappearance is part of a deliberate plot: sixteen top British scientists have inexplicably ceased to function, leaving their jobs at the peak of their careers. At his first departmental meeting, Palmer befriends Jock Carswell. Later, Carswell and Palmer learn that Housemartin has been arrested, but by the time they reach the police station, they find that men impersonating them have killed him. On the train to Paris, Palmer is kidnapped and wakes up imprisoned in a cell.

Harry Saltzman gave Jimmy Sangster a copy of the novel to read. 10 Unsolved Mysteries From The Wild West. History The American West has long been a place for cowboys, gunslingers, and hidden treasure. 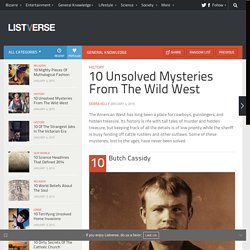 Its history is rife with tall tales of murder and hidden treasure, but keeping track of all the details is of low priority while the sheriff is busy fending off cattle rustlers and other outlaws. Some of these mysteries, lost to the ages, have never been solved. 10 Butch Cassidy The most famous version of the story is the one that was immortalized in the movie starring Paul Newman and Robert Redford as the infamous outlaws. That’s absolutely not the final word, though. According to Cassidy’s sister Lula, she’d heard stories of a number of his acquaintances who had run into him well after the reported date of his death in 1908—including herself. Documents uncovered by historical researchers suggest that the confrontation with Bolivian authorities happened in a home while Cassidy and his gang were sorting through the spoils of a payroll heist. 9 Chief Cochise.