Twitter. Bristol's Second River. TOURISM IN NIGERIA: POST COVID 19 ERA. Twitter. Brian Beard sur Twitter : "To help w/ remote learning I’ve created #StoryMaps for my students to explore. I really like with this one b/c I embedded a #Survey123 for students to show examples which then automatically adds to the map at the bottom of the s. Scene Viewer. Esri UK & IrelandResource Centre. 200 Years of Dutch Topo Maps. Travel through 200yrs of topographic & #cartographic history in The #Netherlands #MapsWeLove… Test your musical genius & #geography skills in this map-based quiz of lyrical places. #TriviaTuesday □ Just zoom & pan to answer each question. Great @ArcGISOnline app by @esriuk of the Tour de France route!

Index. Tracking Down JoAnn Morgan, a Semi-Hidden Figure of U.S. Space History. The space program of the 1960s was a man’s world. 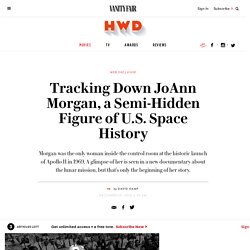 In a famous photo taken in Firing Room No. 1 of Kennedy Space Center on July 16, 1969, the day of Apollo 11’s launch, the consoles are populated by dozens of short-haired men in white shirts and skinny black ties, some of them in lab coats, many of them wearing pocket pen protectors. There is only one woman at a console, in a dark dress, her hand to her chin. Who is she? I thought of this question again while writing about Apollo 11, the forthcoming documentary by Todd Douglas Miller that uses newly unearthed wide-screen film footage from the National Archives to tell the story of the first moon landing.

During the mission’s launch phase, a pan across the firing room reveals this same very woman. Her name, I learned, is JoAnn Morgan. Morgan retired from NASA in 2003, after a career whose inception more or less coincided with the agency’s own, in 1958. King's Landing isn't the only thing that's hot right now □ See imagery of Dubrovnik and other cities in our #GOT filming locations blog #GameofThrones #ForTheThrone #esriukmaps #maps… Bern Szukalski sur Twitter : "I just can't resist a good #cave or #karst #storymap, and here's one from #Esri Thailand about how #ArcGIS was applied during the ThamLuang rescue. Also cool is that this is a bilingual Story Map.… htt.

*****There's a nice feature from @MSUNewsService about our collaboration with @EsriStoryMaps. Find out about the 'Sounds of the Wild West' at @MSULibrary @Esri. Explore. Learn. Be Inspired. *****Smithsonian Folkways Holiday Music Map (Christmas songs) Explore this beautiful new collection of Story Maps on the humanities. There are dozens of stories ranging from housing discrimination to the geography of Hip Hop Music. Geography Treasure Hunt: World Heritage Sites. High Fidelity Polar Elevation. Earth’s poles have historically been some of the most poorly mapped regions on the planet. 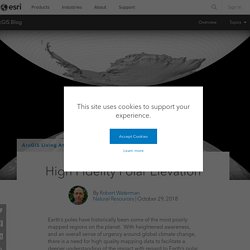 With heightened awareness, and an overall sense of urgency around global climate change, there is a need for high quality mapping data to facilitate a deeper understanding of the impact with regard to Earth’s polar regions. Final Resting Places: Great Graveyards Around the World. The Catholic church is the world's largest private landowner. Molly Burhans of @Good_Lands is using #GIS to help the church manage those lands for the common good. How do we use the Earth’s land? Check out the new ⁦@EsriStoryMaps⁩ #UMNproud that our team helped produce it. Maps, Minds, and Stories. I grew up loving maps. 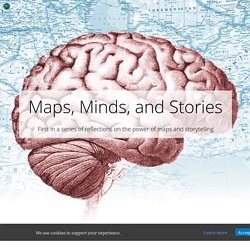 One of my earliest memories is of lying in my bunk bed in my PJs, staring at the world map on the wall of the room I shared with my brother (that's me in the middle, my grandmother on the left). I remember mentally straining to nudge North and South America against Europe and Africa, puzzle-style. Football League Clubs - Year of foundation (England and Wales) London's lost river: the Tyburn. We are constantly learning more and building ever-growing deposit models as tools for investigating change in the past landscape and uncovering London's old rivers. 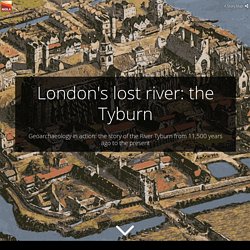 This is just a taster of our work; if you would like to know more, please check out London Archaeologist for a series of articles about the Tyburn valley and floodplain. The most recent is a piece about the site of the former Curtis Green Building, which once formed an extension to the police headquarters at New Scotland Yard. See ‘Liberating the once carefree wanderer: the River Tyburn at the Curtis Green Building, Victoria Embankment, Westminster’, London Archaeologist 15.4 This was preceded by an article about the Abell House and Cleland House site, a development near the Thames by Lambeth Bridge.

See ‘A thorny affair: the Tyburn River and the prehistoric landscape at Abell House and Cleland House in Westminster’, London Archaeologist 15.3. Tap into America: On Tour with Spinal Tap. Twitter. The Human Reach: Atlas. FIFA World Cup 2018 - The finalists' locations, flags and anthems (Story Map) #StoryMaps. Very Large Art. Exploring the past with historic maps. The National Library of Scotland hold a huge number of historic maps, they have just over 199.000 maps online on their website. 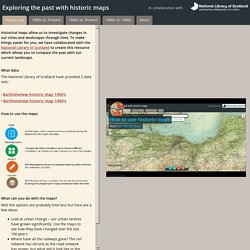 Explore their site for more digitised content, from town plans to air photos. For this storymap we have used two maps made by John Bartholomew & Son Ltd. This family firm started small but the Bartholomew firm became the world's pre-eminent publisher of maps and altases, carrying for many years the title of Geographers and Cartographers royal. For more information about Bartholomew click here. This story map is a new teaching resource that can be used in geography or history lessons. Worlds Revealed: Geography & Maps at The Library Of Congress. The Library of Congress staff is excited to launch Story Maps, interactive and immersive web applications that tell the incredible stories of the Library’s collections! 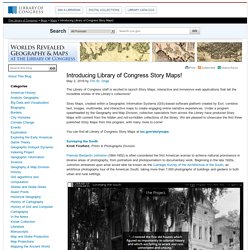 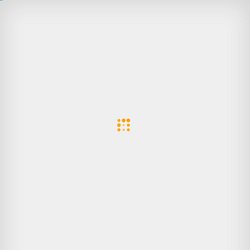 ' Typhoon Haiyan  It quickly became clear that some key aspects of the responses were inadequate, especially the lack of warning about the severity of the storm surge and the failure to enforce evacuation of vulnerable areas. 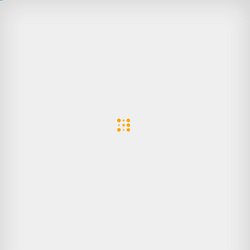 Efforts have been made to learn lessons from Typhoon Haiyan in order to improve the resilience of the Philippines (and other countries) to such weather hazards. These initiatives can be categorised under the '3Ps': Prediction: Forecasting has improved significantly, especially for storm surges. There is now much improved international cooperation in sharing of data and atmospheric modelling of tropical storms. Sgt. Pepper's Places. The song With A Little Help From My Friends implored: "Lend me your ears and I'll sing you a song". 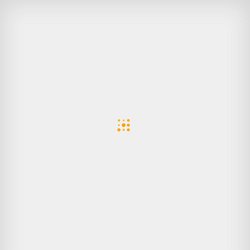 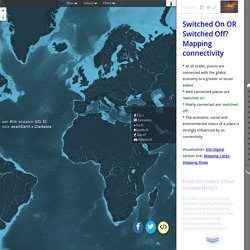 1966 and all that...geography. The 1966 FIFA World Cup took place in England. Such major sporting events are increasingly of interest to geographers. This Story Map explores some geographical aspects of the only World Cup ever held in England, the birthplace of modern Association Football. It was also the only time that England won the World Cup. Facebook Twitter Share Tap for details Swipe to explore Tap to get back to the Map Swipe to explore On 22 August 1960 a FIFA meeting in Rome selected England to host the 1966 World Cup. Shakespeare's London Theatres (Story Map Tour)

Journey of a Product: A loaf of bread. Misconceptions. Kudos to Andrew Skinner for updating his look at Bomber County throughout the century, as bases come and go during and in between conflicts @ArcGISOnline @LivingAtlas… Index. On the Trail of the North American Buffalo. The next 10 to 20 years could be extremely significant for restoring wild populations of American bison to their original roaming grounds. International Union for Conservation of Nature, 2010 The tide is rising for buffalo. New conservation herds appear every couple of years.

Buffalo managers strive for herds free of cattle genes and disease. They use science to track genetics and maintain genetic diversity. Index. The Queen's Official Overseas Visits Since 1952. Coastal views from the United Kingdom. UK Census 2011. Geography, class, and fate: Passengers on the Titanic. More than 2,200 people were on board the Titanic when it struck an iceberg the night of April 14, 1912. The Titanic’s crew of nearly 900 is not included here. First class passengers hailed mainly from U.S. and European cities. Despite orders to put women and children in lifeboats first, survival rates were highest in first class. Most children were in steerage. *****Satellite Map. Amateur An amateur radio satellite is an artificial satellite built and used by amateur radio operators for use in the amateur radio satellite service. Communication A communications satellite or comsat is an artificial satellite sent to space for the purpose of telecommunications.

Geosynchronous. This Esri map shows all satellites in orbit. There are about 1,400 satellites up in space orbiting Earth monitoring the planet from their vantage point. But the space around Earth is actually crowded with tons of things — from artificial satellites (amateur and serious science missions) to orbital debris. According to NASA, there are more than 500,000 pieces of space junk in the space. *****The Making of the British Landscape. Draining the wetlands became part of a bigger project to extend river navigation by constructing artificial ‘cuts’ - canals - to provide freight links for the Industrial Revolution The meanders and inefficient flash-locks of shallow river systems could be bypassed by purpose-built canals with regulated depths and no currents. Golden Eagle Migration. Amazing photographers, great organization!

If you loved our Kilauea story, you won't want to miss this blog on how @MrMapWill put it together #StoryMapsHow. The Making of Kilauea: Fountains of Fire. Wish You Were Here. Index. A story map. How-To: Hurricane Map. Sounds of Planet Earth. Index. Golden Eagle Migration. The Itchen Way. *****Land use changes 1900-2010 Swipe geo-informatie. The search for MH370. LIGHTS OUT. Wish You Were Here. A Journey of 50 Years. On the Front Lines of Famine. Atlas of Hillforts. Where is Your Favorite Beach? *****Children's map. *****What lies beneath #Irelands ocean? Story Maps #WorldOceansDay. Ottawa REDBLACKS - ROUGE ET NOIR D'Ottawa, 2017. The story so far. Been on an awesome trip? Story map it with Story Map Cascade #DigitalStorytelling #Geography #TravelTuesday.