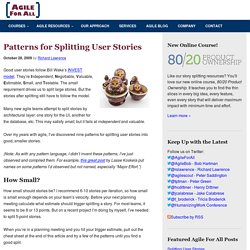 They’re Independent, Negotiable, Valuable, Estimable, Small, and Testable. The small requirement drives us to split large stories. But the stories after splitting still have to follow the model. Many new agile teams attempt to split stories by architectural layer: one story for the UI, another for the database, etc. This may satisfy small, but it fails at independent and valuable. Ten Concrete Techniques to Split User Stories. 10 Tips for Writing Good User Stories. 1. 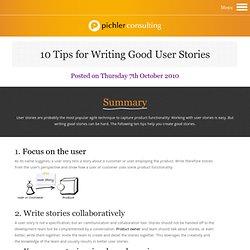 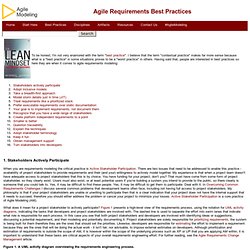 Stakeholders Actively Participate When you are requirements modeling the critical practice is Active Stakeholder Participation. There are two issues that need to be addressed to enable this practice - availability of project stakeholders to provide requirements and their (and your) willingness to actively model together. How to create a User Story Map. User story mapping is becoming a popular technique through the efforts of Jeff Patton and others that allows you to add a second dimension to your backlog. 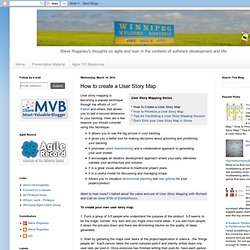 Here are a few reasons you should consider using this technique: It allows you to see the big picture in your backlog.It gives you a better tool for making decisions about grooming and prioritizing your backlog. It promotes silent brainstorming and a collaborative approach to generating your user stories.It encourages an iterative development approach where your early deliveries validate your architecture and solution.It is a great visual alternative to traditional project plans.It is a useful model for discussing and managing scope.Allows you to visualize dimensional planning and real options for your project/product. To create your own user story map: 1. Form a group of 3-5 people who understand the purpose of the product. 3-5 seems to be the magic number. 2. 5. T1 T2 T3 T4 T5 T6 T7 T8 T9 (user tasks = skeleton & timeline) 6. 7. Kaeru. User stories reimagined Since the concept of user stories was introduced it has been used (and misused) in so many ways. 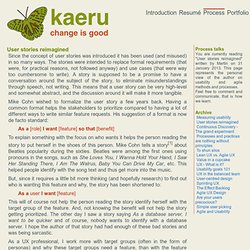 The stories were intended to replace formal requirements (that were, for practical reasons, not followed anyway) and use cases (that were way too cumbersome to write). Introduction to User Stories. 1. 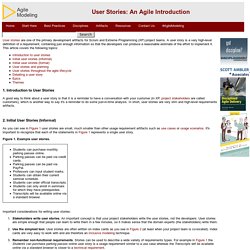 Introduction to User Stories A good way to think about a user story is that it is a reminder to have a conversation with your customer (in XP, project stakeholders are called customers), which is another way to say it's a reminder to do some just-in-time analysis. Agile Analysis. Agile software developers, just like traditional software developers, perform analysis activities. Unlike traditional developers, agilists approach analysis in a highly collaborative manner and do so on a just-in-time (JIT) basis. Analysis is so important to us we do it every single day. In this article, I discuss: 1. What is Analysis? Patterns for Splitting User Stories — Richard Lawrence. 5 Common Mistakes We Make Writing User Stories. Most of the issues with gathering requirements in agile software development and agile testing derive from issues with User Stories. 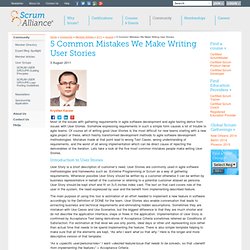 Somehow expressing requirements in such a simple form causes a lot of trouble to agile teams. Of course art of writing good User Stories is the most difficult for new teams starting with a new agile project or these, which freshly transformed development methods to agile software development methodologies. Mistakes made at that point lead to wrong Test Cases, wrong understanding of requirements, and the worst of all wrong implementation which can be direct cause of rejecting the deliverables of the iteration. Lets take a look at the five most common mistakes people make writing User Stories. A user story is to a use case as a gazelle is to a gazebo. My one liner is that a story is a promise to have a conversation and a use case is the record of the conversation. If you think you need one. —JimStandley Very nice. —Alistair I hate to admit to being a star struck rube, but I got the chance to say that to Grady Booch and he smiled.

“Because both begins with b.” -by Seannemo on 08/04/2008 at 1:20 PM Nice answer, SeanNemo! One of my collegues just said: A Use Case is a way of describing requirements. Tim -by Tim Wright on 2/2/2009 at 6:53 PM User Story is simply, a user’s story. Basically starting a conversation (requirements elicitation) of whether their idea (to get some business benefit) is feasible? Stories should be simple and business-focussed, because when faced with complex things which make profit & loos look like a gamble, human mind always wants to cut through all crap and see things in simple and convincing way.

“Divide & Conquer” the most intuitive of human manipulation skills can be applied with Stories so you can break or merge -Ted. User story. History[edit] User stories originated with Extreme Programming (XP), whose first written description in 1998 only claimed that customers defined project scope "with user stories, which are like use cases". 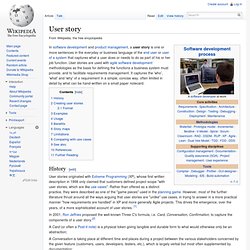 Rather than offered as a distinct practice, they were described as one of the "game pieces" used in the planning game. However, most of the further literature thrust around all the ways arguing that user stories are "unlike" use cases, in trying to answer in a more practical manner "how requirements are handled" in XP and more generally Agile projects. This drives the emergence, over the years, of a more sophisticated account of user stories. [1]

Advantages of User Stories for Requirements published in InformIT Network on October 8, 2004. How to create a User Story Map. Use cases vs User stories in Agile/Scrum development. TL;DR – User stories aren’t use cases. 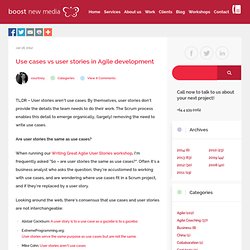 By themselves, user stories don’t provide the details the team needs to do their work. The Scrum process enables this detail to emerge organically, (largely) removing the need to write use cases. Are user stories the same as use cases? When running our Writing Great Agile User Stories workshop, I’m frequently asked “So – are user stories the same as use cases?”. Often it’s a business analyst who asks the question; they’re accustomed to working with use cases, and are wondering where use cases fit in a Scrum project, and if they’re replaced by a user story. Looking around the web, there’s consensus that use cases and user stories are not interchangeable: My standard answer is that user stories are centred on the result and the benefit of the thing you’re describing, whereas use cases are more granular, and describe how your system will act. 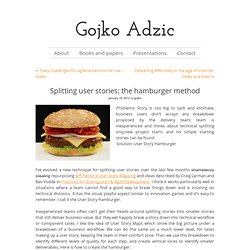 I think it works particularly well in situations where a team cannot find a good way to break things down and is insisting on technical divisions. It has the visual playful aspect similar to innovation games and it’s easy to remember.