I see no choice but to resign from this Death Star as it begins to explode. Why Content is King - Divinations. Strategy trivia time! 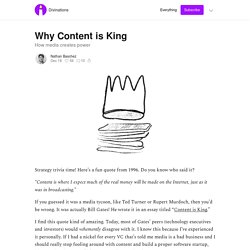 Here’s a fun quote from 1996. Do you know who said it? “Content is where I expect much of the real money will be made on the Internet, just as it was in broadcasting.” If you guessed it was a media tycoon, like Ted Turner or Rupert Murdoch, then you’d be wrong. It was actually Bill Gates! I find this quote kind of amazing. And, look, I get it. - The Washington Post. Boeing 747s still get critical updates via floppy disks. 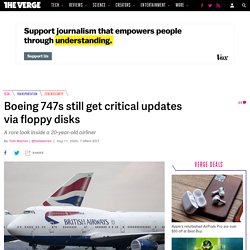 The Register reports that security researchers at Pen Test Partners recently got access to a British Airways 747, after the airline decided to retire its fleet following a plummet in travel during the coronavirus pandemic. The team was able to inspect the full avionics bay beneath the passenger deck, with its data center-like racks of modular black boxes that perform different functions for the plane. Pen Test Partners discovered a 3.5-inch floppy disk drive in the cockpit, which is used to load important navigation databases. It’s a database that has to be updated every 28 days, and an engineer visits each month with the latest updates. While it might sound surprising that 3.5-inch floppy disks are still in use on airplanes today, many of Boeing’s 737s have also been using floppy disks to load avionics software for years. StoryMapJS. The 2015 MacArthur “geniuses” include Ta-Nehisi Coates and a third-generation puppeteer — Quartz.

Apart from the Nobel Prize or the presidential medal of honor, a MacArthur Fellowship—known to many as “the genius grant”—may be the most coveted career credential in the US. 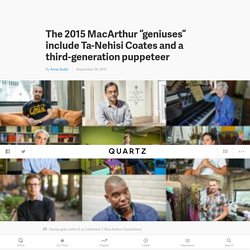 Every year, the MacArthur Foundation selects a crop of extraordinary Americans and hands them $625,000 paid over the course of five years—no strings attached, no progress reports needed. The Foundation hopes to foster creativity in its broadest definition. “The Fellowship is speculative, based on the potential for creativity, and creativity involves taking risks,” wrote the program’s managing director Cecilia Conrad in the commentary published in the Washington Post. “Individually, they demonstrate a track record of enduring accomplishment through tenacity, imagination and risk-taking. Collectively, they reflect the diversity of American creativity.” Alfred Hitchcock Quotes (Author of Alfred Hitchcock Presents)

“There is a distinct difference between "suspense" and "surprise," and yet many pictures continually confuse the two. 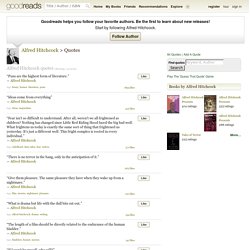 I'll explain what I mean. We are now having a very innocent little chat. Let's suppose that there is a bomb underneath this table between us. Nothing happens, and then all of a sudden, "Boom! " There is an explosion. Mathew A. Powers : IU School of Informatics and Computing, IUPUI. Lecturer, Media Arts and Science Contact matapowe@indiana.edu IT 455 317-278-8448 Education M.F.A. 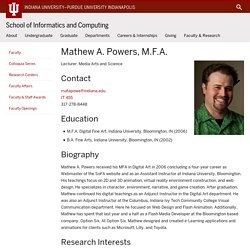 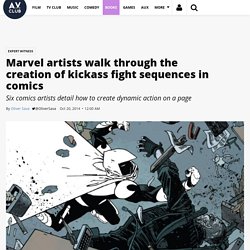 While the public sees the end product on TVs, movie screens, paper, or radio dials, they don’t see what it took to get there. In Expert Witness, The A.V. Club talks to industry insiders about the actual business of entertainment in hopes of shedding some light on how the pop-culture sausage gets made. It’s been a phenomenal year for superhero action at Marvel Comics, with the All-New Marvel Now! Initiative introducing a crop of new titles that deliver high-impact, dynamic fight sequences. 24-Hour Comics Day – October 3, 2015. Scott McCloud: The visual magic of comics. Tag and Bink, an example on developing characters. Star Wars: Tag & Bink Are Dead #1 (October 2001) Tag and Bink are the Rosencrantz and Guildenstern of the Star Wars universe, a pair of minor characters who deliberately or accidentally influence the events seen in the first and second film trilogies. 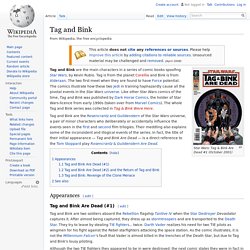 Their meddling also explains some of the inconsistent and illogical events of the series. In fact, the title of their initial appearance — Tag and Bink Are Dead — is a direct reference to the Tom Stoppard play Rosencrantz & Guildenstern Are Dead. Appearances[edit] Tag and Bink Are Dead (#1)[edit] Tag and Bink are two soldiers aboard the Rebellion flagship Tantive IV when the Star Destroyer Devastator captures it. Although the two TIE fighters they appeared to be in were destroyed, the next comic states they were in fact in the background when Vader selected two pilots, and that they stole an Imperial landing craft and escaped from the Death Star moments before it exploded. Tag and Bink Are Dead (#2) and the Return of Tag and Bink[edit]