European Commission on Twitter: "How #digital is your country? EU Digital Index reveals progress needed to #DigitalSingleMarket. European Commission - PRESS RELEASES - Press release - How digital is your country? New figures reveal progress needed towards a digital Europe. There are plenty of digital opportunities waiting to be unlocked to benefit European citizens and companies. 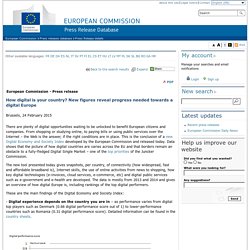 From shopping or studying online, to paying bills or using public services over the Internet – the Web is the answer, if the right conditions are in place. This is the conclusion of a new Digital Economy and Society Index developed by the European Commission and released today. Data shows that the picture of how digital countries are varies across the EU and that borders remain an obstacle to a fully-fledged Digital Single Market – one of the top priorities of the Juncker Commission. The new tool presented today gives snapshots, per country, of connectivity (how widespread, fast and affordable broadband is), Internet skills, the use of online activities from news to shopping, how key digital technologies (e-invoices, cloud services, e-commerce, etc) and digital public services such as e-government and e-health are developed. 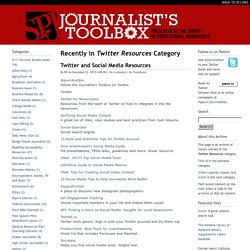 Twitter Twitter for NewsroomsResources from the team at Twitter on how to integrate it into the newsroom. Verifying Social Media ContentA great list of links, case studies and best practices from Josh Stearns. Social-SearcherSocial search engine. 13 Style and Grammar Tips for Twitter Success. The Journalist's Toolbox: Copy Editing Archives. I.Know .:. Newsroom. Reporters write at typewriters, receive information by telephone from field reporters, wait for assignments, and study various newspapers at desks in the newsroom of The New York Times, in this photo from 1942. 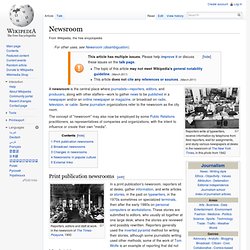 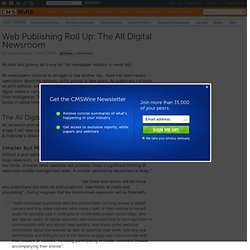 As newspapers continue to struggle to see another day, there has been recent speculation about the dramatic shifts poised to take place. It's News! Digital Storytelling Articles. Newspapers Are Still Dying, But the News Is Not Going Anywhere. Despite newspaper share prices seeing a 380% increase in the last year, don't be swayed by the perceived recovery. The only way for newspapers to survive is by investing resources into innovation online. Experiments are needed that not only challenge and test the behaviors of news consumption with digital and interactive forms of storytelling, but perhaps more importantly, business models are needed that are not limited to a silver-bullet hope that building a wall around their content will save them. With the exception of the few, the chances of pay walls generating revenue from readers who have grown accustomed to free content online are grim.

Newspaper companies that continue to treat their websites as a dumping ground for news from their print product will meet their eventual demise. While many in the industry were hoping the decline in ads was cyclical, the ad rebound has skipped newspapers. Digital storytelling. Digital storytelling refers to a short form of digital media production that allows everyday people to share aspects of their life story. 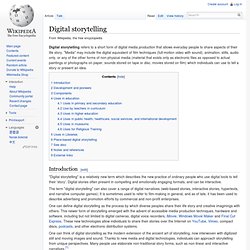 "Media" may include the digital equivalent of film techniques (full-motion video with sound), animation, stills, audio only, or any of the other forms of non-physical media (material that exists only as electronic files as opposed to actual paintings or photographs on paper, sounds stored on tape or disc, movies stored on film) which individuals can use to tell a story or present an idea.

Introduction[edit] 7 Things You Should Know About Digital Storytelling. Digital storytelling involves combining narrative with digital content to create a short movie. Digital stories can include interactive movies with highly produced audio and visual effects or presentation slides with narration or music. Some learning theorists believe that as a pedagogical technique, storytelling can be effectively applied to nearly any subject. Constructing a narrative and communicating it effectively require one to think carefully about the topic and the audience's perspective.

The "7 Things You Should Know About... " series from the EDUCAUSE Learning Initiative (ELI) provides concise information on emerging learning practices and technologies. Each brief focuses on a single practice or technology and describes what it is, where it is going, and why it matters to teaching and learning. Wales - Digital Storytelling. 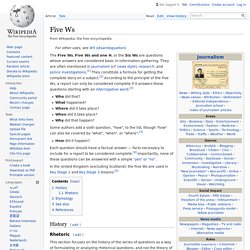 They are often mentioned in journalism (cf. news style), research, and police investigations.[1] They constitute a formula for getting the complete story on a subject.[2] According to the principle of the Five Ws, a report can only be considered complete if it answers these questions starting with an interrogative word:[3] Who did that? What happened? Create stories using social media - storify.com. Digital Storytelling Ideas. Wendy and Brenda and Shonda Digital Storytelling Presentation Slides. Digital journalism. Fewer barriers to entry, lowered distribution costs, and diverse computer networking technologies have led to the widespread practice of digital journalism.[3] It has democratized the flow of information that was previously controlled by traditional media including newspapers, magazines, radio, and television.[4] A greater degree of creativity can be exercised with digital journalism when compared to traditional journalism and traditional media.[5] The digital aspect can be central to the journalistic message or not, and remains within the creative control of the writer, editor, and/or publisher.[6] Overview[edit] 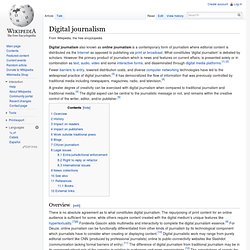 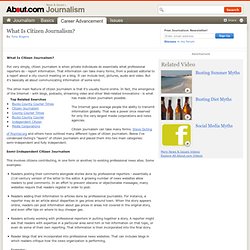 Put very simply, citizen journalism is when private individuals do essentially what professional reporters do - report information. That information can take many forms, from a podcast editorial to a report about a city council meeting on a blog. It can include text, pictures, audio and video. But it's basically all about communicating information of some kind.

The other main feature of citizen journalism is that it's usually found online. Grassroots. A grassroots movement (often referenced in the context of a political movement) is driven by a community's politics. 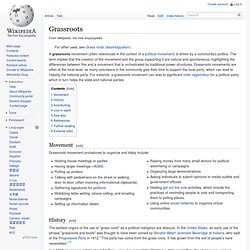 The term implies that the creation of the movement and the group supporting it are natural and spontaneous, highlighting the differences between this and a movement that is orchestrated by traditional power structures. Grassroots movements are often at the local level, as many volunteers in the community give their time to support the local party, which can lead to helping the national party. 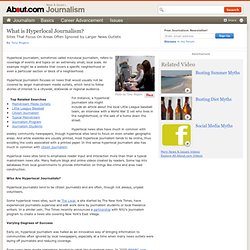 An example might be a website that covers a specific neighborhood or even a particular section or block of a neighborhood. Hyperlocal journalism focuses on news that would usually not be covered by larger mainstream media outlets, which tend to follow stories of interest to a citywide, statewide or regional audience. For instance, a hyperlocal journalism site might include an article about the local Little League baseball team, an interview with a World War II vet who lives in the neighborhood, or the sale of a home down the street. Hyperlocal news sites have much in common with weekly community newspapers, though hyperlocal sites tend to focus on even smaller geographic areas. And while weeklies are usually printed, most hyperlocal journalism tends to be online, thus avoiding the costs associated with a printed paper.

Blog for the Prospect Heights Neighborhood. The Digital Journalist. Why Newspapers Need Community Managers. Community management: are we all talking about the same thing? Something interesting has started happening when we go and talk to prospective clients about online community management services. There are various companies which specialise in community management and moderation, and have done for a number of years, but agencies (mostly PR and communications agencies, rather than digital ad agencies) are starting to claim expertise in community management, and to be honest, I don’t think they’re talking about the same thing as we are. It’s causing real confusion client-side. While we both work with online communities, I think we need to be clear about the definitions of what we each do, so we can work together more effectively. Community management is the process of growing, building and nurturing an engaged and active community. This is very different from the process required to manage that community.

Community managers are trained specialists, who guide and engage with the members of a community. 4 Traits of an Effective (or Obsessed) Community Manager. Photo Credit: Niall Kennedy Last week one of my friends on Twitter, Brett Mickelson, tweeted at me in response to my blog post “Why Newspapers Need Community Managers.” He asked me to talk about what news organizations should look for in someone that they’re considering hiring in a community management-type role. Online communities need leadership: Will journalists provide it, or will someone else?

Building a helpful online community requires much more than enabling a comment system for articles or throwing open a discussion board. The free news source. Five must-see presentations on digital news. OnlineNewspapers. Engines of Discovery.