Not True, But Good Story Fodder

Aliens created our genetic code and signed it with the number 37, scientists state. The notion that life on Earth has alien origins is nothing new, but a pair of researchers believe that they have cracked an ancient code which prove that life was planted on Earth by extraterrestrial beings. 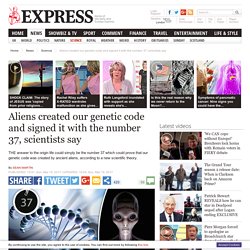 Maxim Makukov from the Fesenkov Astrophysical Institute in Almaty, Kazakhstan, claims to have discovered an “intelligent-like signal” that is encoded into our genetic material. Although he admits that the theory is “out there”, he and his research mentor, mathematician Vladmir shCherbak, believe that they have conclusive evidence that a message, or a signature, is in our genetic code. Panspermia is the process in which life is transferred from one planet to another. Some biologists believe that life on Earth began when an asteroid collided with Mars, causing the supposedly once microbial-full soil to be flung Earthbound. One instance is that the mass of the molecular core shared by all 20 amino acids is 74 – which is 37 doubled. LAND OF THE GIANTS? 'Bus-sized spider found on remote island' on Google Earth. Channel Mexico Geek posted a video entitled "Giant Insect on Google Earth" which speculated it may show a monster spider or crab. 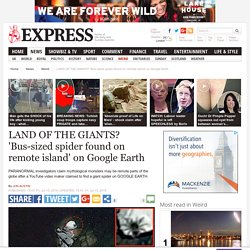 Neither, of course are insects as a spider is an arachnid and a crab a crustacean. But the video zooms in on what looks like a large spider clambering onto a rock from the ocean. It is not clear from the video which part of the globe the Google Earth footage stems from. The video said the rocks were of a considerable size, so it must be a gigantic creature. Paranormal buff Scott C waring blogged about the video. He said: "MexicoGeek of Youtube found a giant crab or spider on a tiny island in the ocean. New Discoveries in Ancient Underground City in Cappadocia will rewrite history as we know it. According to statements from archaeologists and city officials from Cappadocia, new discoveries regarding the massive underground city in Cappadocia will rewrite our history books forever. 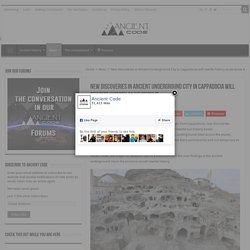 Researchers have now discovered that unlike other underground cities across the planet, people who lived in the underground city in Cappadocia lived there permanently and not temporary as it was believed earlier. Ten Archaeological Enigmas from Across the Globe. One of the best things about archaeology is uncovering places, artifacts, and human remains that answer long-held mysteries about our past and our origins. 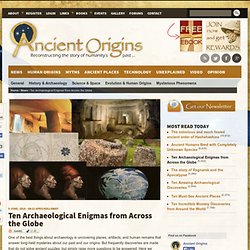 But frequently discoveries are made that do not solve ancient puzzles, but simply raise more questions to be answered. Here we feature ten such discoveries – from indecipherable manuscripts to Frankenstein mummies, and incredible artifacts from unknown civilizations. Some of these mysteries will one day be solved as science and research techniques progress, others will keep their secrets hidden forever.

The Unknown Origins of the Longyou Caves Located near the village of Shiyan Beicun in Zhejiang province, China, lies the Longyou caves - an extensive, magnificent and rare ancient underground world considered in China as ‘the ninth wonder of the ancient world’. The Sound Effects of Malta’s Hypogeum Hal Saflieni The Indecipherable Voynich Manuscript In 1912, a Polish-American book dealer named Wilfrid M. 10 Mysteries That Hint At Forgotten Advanced Civilizations.

Mysteries Prehistory literally means the time “before we had written records” (roughly the time before the 4th Century BC) and ancient history is the time since our recorded history. 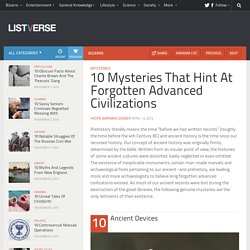 Our concept of ancient history was originally firmly determined by the bible. Written from an insular point of view, the histories of some ancient cultures were distorted, badly neglected or even omitted. The existence of inexplicable monuments, certain man-made marvels and archaeological finds pertaining to our ancient- and prehistory, are leading more and more archaeologists to believe long forgotten advanced civilizations existed. As most of our ancient records were lost during the destruction of the great libraries, the following genuine mysteries are the only remnants of their existence. Ancient knowledge was a lot more refined and developed than we have been taught hitherto. Despite wars and several invasions, India’s ancient history was largely preserved. Amazing Giant Megaliths in Russia: Natural or Man Made? By Red Ice Creations Newly found megalithic stones are causing excitement in alternative history circles, and, depending on the research that continues to be done on this, history may require a rewrite. 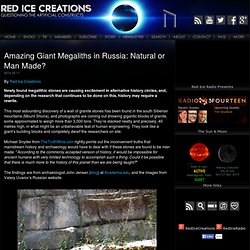 This most astounding discovery of a wall of granite stones has been found in the south Siberian mountains (Mount Shoria), and photographs are coming out showing gigantic blocks of granite, some approximated to weigh more than 3,000 tons. They’re stacked neatly and precisely, 40 metres high, in what might be an unbelievable feat of human engineering. They look like a giant’s building blocks and completely dwarf the researchers on site. Michael Snyder from TheTruthWins.com rightly points out the inconvenient truths that mainstream history and archaeology would have to deal with if these stones are found to be man made: "According to the commonly accepted version of history, it would be impossible for ancient humans with very limited technology to accomplish such a thing. 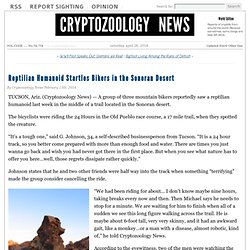