3 west side story. Year 13. An Analysis of West Side Story's Songs "Cool" and "America" As long as love, hatred, and conflict remain in the world West Side Story will remain an important, timeless, and relevant work. 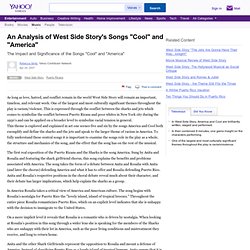 One of the largest and most culturally significant themes throughout the play is racism/violence. This is expressed through the conflict between the sharks and jets which comes to symbolize the conflict between Puerto Ricans and poor whites in New York city during the 1950's and can be applied on a broader level to symbolize racial tension in general. This theme is explored and explained in act one scenes five and six by the songs America and Cool both exemplify and define the sharks and the jets and speak to the larger theme of racism in America. To fully understand these central songs it is important to examine the songs role in the play as a whole, the structure and mechanics of the song, and the effect that the song has on the rest of the musical. The first real exposition of the Puerto Ricans and the Sharks is the song America.