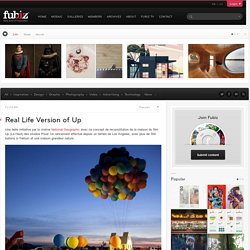 Un lancement effectué depuis un terrain de Los Angeles, avec plus de 300 ballons à l’hélium et une maison grandeur nature. This Model With Vitiligo Is Possibly The Most Inspirational Thing You'll See Today. Same But Different - Theo's Story. How to Unhook from an Emotionally Unavailable Partner. I met a man. He appeared interested in me but I didn’t know if I was interested in him. Before We Fall in Love. Via Kristin Monkon Mar 23, 2014. 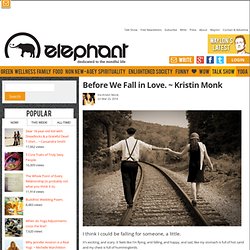 R.I.P Chuppy: These Adorable Photos Will Always Remind Us Of Chuppy The Golden Retriever. Although Chuppy the majestic golden retriever passed away just week ago, his memory will live on in these beautiful pictures taken by his owner, Jessica Trinh. 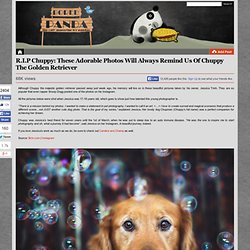 They are so popular that even rapper Snoop Dogg posted one of the photos on his Instagram. All the pictures below were shot when Jessica was 17-18 years old, which goes to show just how talented this young photographer is. “There is a mission behind my photos. I wanted to make a statement in pet photography. I wanted to call it an art. <…> I love to create surreal and magical scenarios that produce a different scene…not JUST another cute dog photo. German Shepherd Ciccio Attends Italian Church Of Santa Maria Assunta Mass Daily As He Mourns Late Owner Maria Lochi (PICTURES) A dog whose owner died two months ago visits the church where her funeral was held every day in the hope she will return. 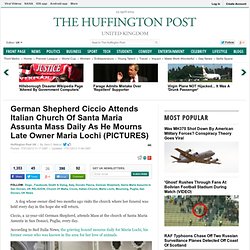 Ciccio, a 12-year-old German Shepherd, attends Mass at the church of Santa Maria Assunta in San Donaci, Puglia, every day. According to Sud Italia News, the grieving hound mourns daily for Maria Lochi, his former owner who was known in the area for her love of animals. Russian Mother Takes Magical Pictures of Her Two Kids With Animals On Her Farm. These wonderful photographs by Elena Shumilova plunge the viewer into a beautiful world that revolves around two boys and their adorable dog, cat, duckling and rabbit friends. 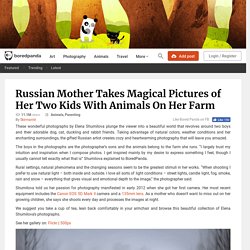 Taking advantage of natural colors, weather conditions and her enchanting surroundings, the gifted Russian artist creates cozy and heartwarming photography that will leave you amazed. Show Full Text The boys in the photographs are the photographer’s sons and the animals belong to the farm she runs. Autistic Second Grader Teaches Rest of Us Huge Lesson - Topekas News. It is oft the acts of children that can teach all us adults great and valuable lessons. 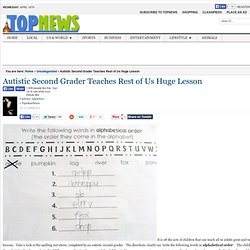 Take a look at the spelling test above, completed by an autistic second-grader. The directions clearly say ‘write the following words in alphabetical order‘. The child earned the only ‘A’ in the class: why is this? When you realize just how special the child’s mind is, you can come to appreciate just another layer of wonder we can find in how the world is perceived by each person. From B-93.7. Dog is the best parenting. Eilasblog.com. For those of you who don’t know how amazing my husband is, here is a glimpse. 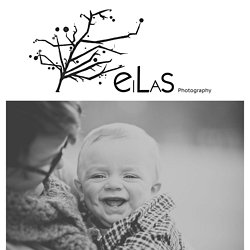 He has almost single-handedly remodeled our house, room by room, over the last 7 years. We still have a few more projects in the house, but he was persuaded to work outside this time on a tree house for our kids. I always wanted a treehouse as I was growing up and never got the chance to have one, so when he told our kids last year that he would build one for them, I made him deliver on that promise! It took him a bit longer than expected because he is a perfectionist and a beautiful designer, so it evolved as he built it. But, the end result was definitely worth it. I documented the process with my Iphone, but took some final photos with my good camera, both at night and daytime. Enjoy! Buying more wood for the project. 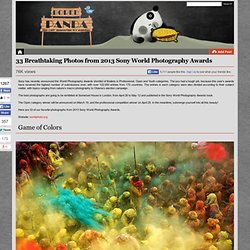 The jury had a tough job, because this year’s awards have received the highest number of submissions ever, with over 122.000 entries from 170 countries. The entries in each category were also divided according to their subject matter, with topics ranging from nature’s macro photography to Obama’s election campaign. The best photographs are going to be exhibited at Somerset House in London, from April 26 to May 12 and published in the Sony World Photography Awards book. The Open category winner will be announced on March 19, and the professional competition winner on April 25. In the meantime, submerge yourself into all this beauty! Here are 33 of our favorite photographs from 2013 Sony World Photography Awards. Website: worldphoto.org Game of Colors Open Competition Shortlist, Arts & Culture, Photo by: Anurag Kumar. In loving arms: Man floats his sick dog to sleep, becomes Internet sensation. Tails of survival Aug. 10, 2012 at 7:07 AM ET. 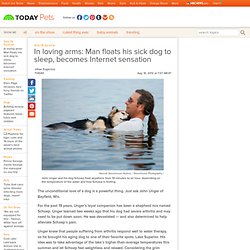 Related:  ARTS - TO Orgensie   -  Random   -  Real Life Version of Up   -  Russian Mother Takes Magical Pictures of Her Two Kids With Animals On Her Farm   -  Education   -  Enterprise