Comparative phylogenetic analyses uncover the ancient roots of Indo-European folktales. Abstract Ancient population expansions and dispersals often leave enduring signatures in the cultural traditions of their descendants, as well as in their genes and languages. 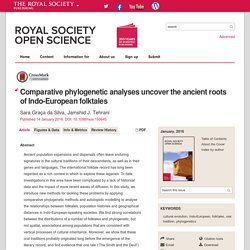 The international folktale record has long been regarded as a rich context in which to explore these legacies. To date, investigations in this area have been complicated by a lack of historical data and the impact of more recent waves of diffusion. In this study, we introduce new methods for tackling these problems by applying comparative phylogenetic methods and autologistic modelling to analyse the relationships between folktales, population histories and geographical distances in Indo-European-speaking societies. 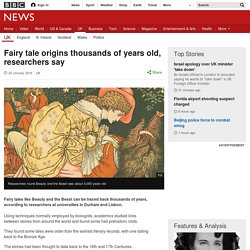 Using techniques normally employed by biologists, academics studied links between stories from around the world and found some had prehistoric roots. They found some tales were older than the earliest literary records, with one dating back to the Bronze Age. The stories had been thought to date back to the 16th and 17th Centuries. Durham University anthropologist Dr Jamie Tehrani, said Jack and the Beanstalk was rooted in a group of stories classified as The Boy Who Stole Ogre's Treasure, and could be traced back to when Eastern and Western Indo-European languages split more than 5,000 years ago.

Analysis showed Beauty And The Beast and Rumpelstiltskin to be about 4,000 years old. Once upon a time... A blacksmith strikes a deal with a malevolent supernatural being, such as the Devil, Death or a genie. 'Pretty remarkable' Jcc gazette no 303 summer 2012 benhaggarty article. The Silk Road Project – Ben Haggarty. Storyteller (United Kingdom) Since 1981, Ben Haggarty has been one of the prime forces behind the revival of the art of professional storytelling in Britain. 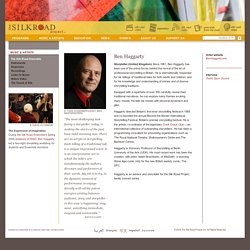 He is internationally respected for his tellings of traditional tales for both adults and children, and for his knowledge and understanding of stories and of diverse storytelling traditions. Equipped with a repertoire of over 300 carefully researched traditional narratives, he can explore many themes evoking many moods. He tells his stories with physical dynamism and glee. Haggarty directed Britain's first-ever storytelling festival in 1985 and co-founded the annual Beyond the Border International Storytelling Festival, Britain's premier storytelling festival. Open Source Storytelling: Ben Haggarty. RadioOpenSource Silkroad. Liz's Ireland Journal: Pat Speight Comes to Study Abroad Ireland. The Three Rivers Storytelling Festival brought Pat Speight to my class on Thursday, June 9th. 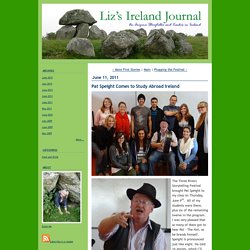 All of my students were there, plus six of the remaining twelve in the program. I was very pleased that so many of them got to hear Pat – The Hat, as he brands himself. Speight is pronounced just like eight. He told 16 stories, which I’ll detail below, which brings our total up to 37. Pat started off by telling us that he was an “organic storyteller” with no professional academic training. He gave us some background on himself and on the ancient tradition of storytelling in Ireland. He explained the difference between the two Irish names for storyteller: seanchai and scealai. Pat then told us his first story. American Storyteller in the Netherlands Mary Sue Siegel.

Reaching African Children Through Fables and Animation  When the Lion King came to Broadway in 1997, I was happy for Africa. 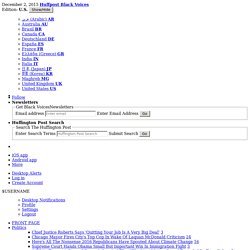 The Lion King is a 1994 American animated feature film produced by Walt Disney Feature Animation. Ok, I agree it is not a realistic picture of Africa but I will take it as opposed to the Tarzan and Jane one. Finally, we got another slice of story telling using images that celebrated African culture and heritage. Arit's Fables: Anansi & the Turtle. Dave Allen - "Teaching Your Kid Time" - '93 - stereo HQ. 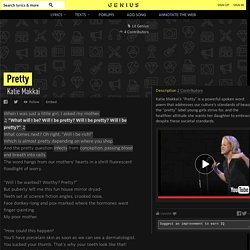 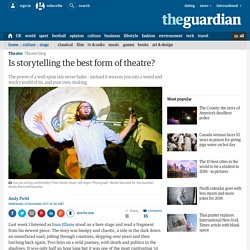 The story was bumpy and chaotic, a ride in the dark down an unsurfaced road, jolting through countries, skipping over years and then lurching back again. Two boys on a wild journey, with death and politics in the shadows. It was only half an hour long but it was one of the most captivating 30 minutes of theatre I've encountered for months. There is some great storytelling happening in this country. From the luscious spectacle of 1927's The Animals and the Children Took to the Streets to the simplicity of Chris Thorpe's absurd sketches (delivered using only a chair and a microphone), artists are finding ways of weaving yarns that are as daring as they are imaginative. 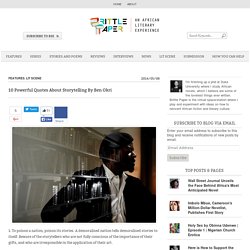 To poison a nation, poison its stories. A demoralised nation tells demoralised stories to itself. Beware of the storytellers who are not fully conscious of the importance of their gifts, and who are irresponsible in the application of their art. 2. The greatest religions convert the world through stories. 3. 4. 5. 6. 7. 9. 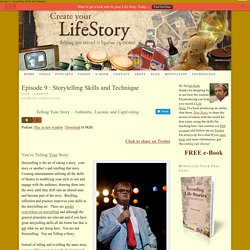 Mr Sandmann, bringer of dreams & nightmares. Grimm Tales... 3 Drops of Blood. Stories in a Bag. Stories in a Nutshell. The Society for Storytelling.