The report reveals that serious differences have been noticed between Pentagon, Whitehouse and CIA over Obama’s economic policies, exit strategy of Afghanistan, Iranian nuclear programme, unwarranted interferences in Middle East countries, supporting Israel and India against Arabs, China and Pakistan. In fact, political set up mainly “Opposition and Pentagon” demanding disengagement of troops from the war zones since continue out of land’s deployment is severally demoralizing the forces and causing horrible effects on America’s economy. According the defence analysts, American economy continues racing towards financial oblivion, because of its military forces occupying nearly the entire planet. The writer can be approached through zameer36@gmail.com. 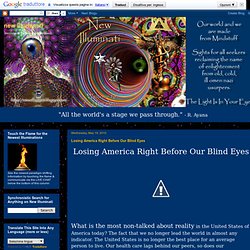 The fact that we no longer lead the world in almost any indicator. The United States is no longer the best place for an average person to live. Our health care lags behind our peers, so does our educational system. I'm going to tell you a fact, then back it up with statistical data, the accuracy of which you can directly verify for yourself, and readers will still have a hard time accepting it as the truth.

Most Americans are relatively worse off in many ways than people in 19 other industrialized powerhouse countries (Japan, Germany, United Kingdom, France, Italy, Canada, Australia, Austria, Belgium, Denmark, Finland, Greece, Ireland, Netherlands, New Zealand, Norway, Spain, Sweden, and Switzerland). Per Capita Income: U.S. Highest Child Poverty Rate: U.S. Try to let this information sink in if you can. Shouldn’t this news shock us? Something must be done. From. The "Green Light": Wouldn't It Be Nice?

PROOF USA COLLAPSE MONTHS AWAY? (June2012) Must See!! It's Official! Obama is an Illegal President! Now What? CIA Asset Susan Lindauer.. Can Now Speaks 10 years after 2001-9-11. Former CIA Spy Tells the Truth. Government Thought Policing: The NSA and Remote Neural Monitoring (RNM) « Dillsnap Cogitations. [Addendum dated 9-19-2010: The blog post comment below perfectly encapsulates the content of this post with regards to the claims in Mr. 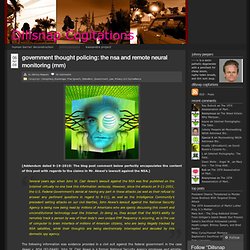 Akwei's lawsuit against the NSA.] Several years ago when John St. Clair Akwei’s lawsuit against the NSA was first published on the Internet virtually no one took this information seriously. However, since the attacks on 9-11-2001, the U.S. Federal Government’s denial at having any part in these attacks (as well as their refusal to answer any pertinent questions in regard to 9-11), as well as the Intelligence Community’s precedent setting attacks on our civil liberties, John Akwei’s lawsuit against the National Security Agency is being now being read by millions of Americans who are openly discussing this covert and unconstitutional technology over the Internet. The following information was evidence provided in a civil suit against the federal government in the case Akwei v. (Source) Signals Intelligence (SIGINT) Domestic Intelligence (DOMINT) SECRET KNOWLEDGE - "NOT FOR US TO KNOW"? US GOVERMENT: There are 38 Levels above TOP SECRET! UFO. Bob Bowman: Star Wars Secrets & Lies (FULL VIDEO)