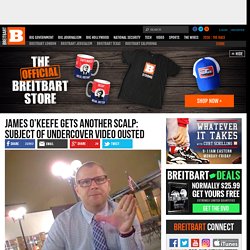 “Americans United For Change has always operated according to the highest ethical and legal standards. Scott Foval is no longer associated with Americans United for Change.” In an exclusive interview with Breitbart News, James O’Keefe said he believes this is not the end. “They want to make Scott Foval the fall guy. But this rot goes higher and deeper. A quote from Foval published in the widely read Breitbart article supports this, with Foval saying,”We are contracted directly with the DNC and the campaign. As Breitbart News reported earlier today: Foval also explains how the operation is set up to allow the DNC and the Clinton campaign “plausible deniability” in the event that the true nature of the deliberate violence is discovered: “The thing that we have to watch is making sure there’s a double-blind between the actual campaign and the actual DNC and what we’re doing.

THE WIKILEAKS LIST: At Least 65 MSM Reporters Were Meeting with and/or Coordinating Offline with Top Hillary Advisors. Obama's Legacy: Normalizing Race Riots and Domestic Terrorism. Dailywire. Obama: Americans Too ‘Lazy’ to Know Anything About the Rest of the World.

Left Planned to Stage Violence to Bring Down Trump. Much of the mainstream media, following the Clinton campaign’s talking points, have accused Donald Trump of suggesting that Second Amendment supporters assassinate Hillary Clinton. 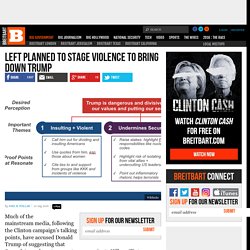 In deflecting that false charge, Trump’s own spokesperson, Katrina Pierson, made an interesting observation: that it has been the Democrats’ strategy all along to associate Trump with violence. And for that purpose, it did not matter whether the violence was caused by Trump supporters, or by his opponents. Pierson told The Kelly File (via rushlimbaugh.com): If you go back to the WikiLeaks release of the DNC emails, this is on the PowerPoint playbook on the messaging — slide number 6 — with the messaging theme number 1: Violence. They were looking for an opportunity to pick up somewhere to continue this narrative that somehow Donald Trump is violent. Here is the relevant slide, in full. Source: Wikileaks. 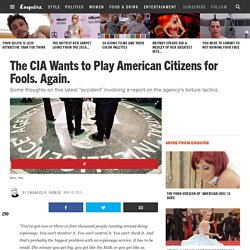 You can't monitor it. You can't control it. You can't check it. And that's probably the biggest problem with an espionage service. It has to be small. —Aldrich Ames, American traitor, as quoted in Legacy of Ashes (Tim Weiner). Over the weekend, we got another look at what the CIA was up to back in the days when there was a general public consensus that it knew what the fck it was doing. The events leading up the the arrest of Nelson Mandela, on a dark night near Durban in 1962, have always been murky.

Advertisement - Continue Reading Below Yeah, good luck with those files, especially given the spectacular news from this side of the pond regarding one of the CIA's most recent escapades in international thooleramawnery. And I am the Tsar of all the Russias. The incident was privately disclosed to the Senate Intelligence Committee and the Justice Department last summer, the sources said. President John F. Nightmarish Lines Continue At Airport Security Checkpoints. CHICAGO (CBS) — Travelers flying out of Chicago just can’t catch a break. 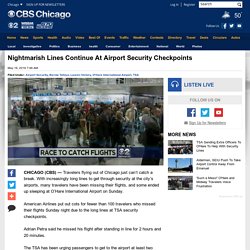 With increasingly long lines to get through security at the city’s airports, many travelers have been missing their flights, and some ended up sleeping at O’Hare International Airport on Sunday. American Airlines put out cots for fewer than 100 travelers who missed their flights Sunday night due to the long lines at TSA security checkpoints. Adrian Petra said he missed his flight after standing in line for 2 hours and 20 minutes. The TSA has been urging passengers to get to the airport at least two hours early for domestic flights, and three hours early for international flights. However, some passengers have said that is not enough time to get through security and still make their flight. PLAN B: Some Travelers Flock To TSA ‘Precheck’ Offices American Airlines said some 4,000 passengers have missed flights at O’Hare since February because of the long wait times.