AQA A Comp 04670. Top Democrat's emails hacked by Russia after aide made typo, investigation finds. Russian hackers were able to access thousands of emails from a top-ranking Democrat after an aide typed the word “legitimate” instead of “illegitimate” by mistake, an investigation by the New York Times has found. 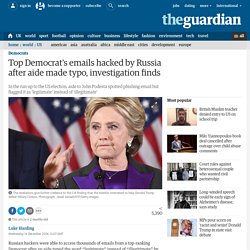 The revelation gives further credence to the CIA’s finding last week that the Kremlin deliberately intervened in the US presidential election to help Donald Trump. The president-elect has angrily denied the CIA’s assessment, calling it “ridiculous”. In the run-up to the election, the US Democratic National Committee (DNC) received numerous phishing emails, the paper reported on Tuesday.

One of them was also sent to John Podesta, the chairman of Hillary Clinton’s campaign. An aide, Charles Delavan, spotted the message sent to Podesta’s private account. Delavan realised the email was a phishing attack and forwarded it to a computer technician. The blunder gave Kremlin hackers access to about 60,000 emails in Podesta’s private Gmail account. 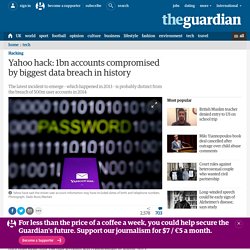 The number of affected accounts was double the number implicated in a 2014 breach that the internet company disclosed in September and blamed on hackers working on behalf of a government. “An unauthorised party” broke into the accounts, Yahoo said in a statement posted on its website. The company believes the hacks are connected and that the breaches are “state-sponsored”.

The hackers used “forged ‘cookies’” – bits of code that stay in the user’s browser cache so that a website doesn’t require a login with every visit, wrote Yahoo’s chief information security officer, Bob Lord. Man arrested for computer misuse after Derbyshire organisation was hacked. Posted on 14th December 2016 A hacker who was arrested after targeting an organisation in Derbyshire will be working with them to help bolster their security. 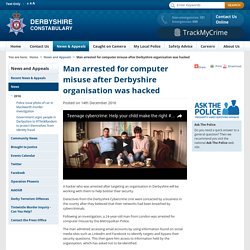 Detectives from the Derbyshire Cybercrime Unit were contacted by a business in the county after they believed that their networks had been breached by cybercriminals. Following an investigation, a 24-year-old man from London was arrested for computer misuse by the Metropolitan Police. The man admitted accessing email accounts by using information found on social media sites such as LinkedIn and Facebook to identify targets and bypass their security questions. This then gave him access to information held by the organisation, which has asked not to be identified. Instead of pursuing a prosecution, the victims agreed to a ‘restorative justice’ option whereby the hacker will now be giving advice to the organisation about cyber security and some of the methods used to breach networks. Computer misuse act. Three to appear in court over TalkTalk hack Three men are due to appear at the Old Bailey charged with various offences linked to an investigation into the mega TalkTalk hack a year ago. 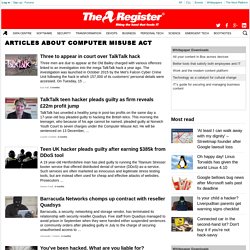 Sky News boss admits it broke the law by hacking emails... but says sometimes journalists need to do it to 'shed light' on wrongdoing. John Ryley said he was 'not sufficiently aware' of Computer Misuse Act when he found out about email hackingApologises for submitting inaccurate statement saying its journalists had not intercepted any communicationOfcom launching investigation into email hacking by the broadcasterRupert Murdoch pictured arriving at his London home two days before giving evidence By Emily Allen Published: 14:05 GMT, 23 April 2012 | Updated: 20:18 GMT, 23 April 2012 The head of Sky News today admitted to the Leveson Inquiry that the broadcaster broke the law by hacking into emails - and refused to rule out breaking the law again. 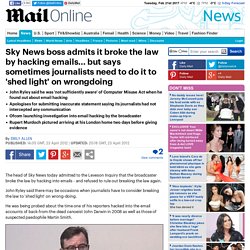 John Ryley said there may be occasions when journalists have to consider breaking the law to 'shed light' on wrong-doing. He was being probed about the time one of his reporters hacked into the email accounts of back-from-the-dead canoeist John Darwin in 2008 as well as those of suspected paedophile Martin Smith. Mr Ryley replied: 'It doesn't.' 'As I understand it,' he said. Arrest in computer hacking probe. Boy, 15, arrested in Northern Ireland in connection with TalkTalk hack.

A 15-year-old boy has been arrested in Northern Ireland in connection with the TalkTalk hacking attack, Scotland Yard has said. 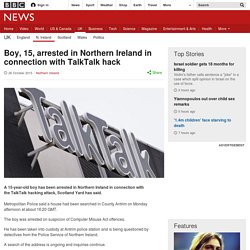 Metropolitan Police said a house had been searched in County Antrim on Monday afternoon at about 16:20 GMT. The boy was arrested on suspicion of Computer Misuse Act offences. He has been taken into custody at Antrim police station and is being questioned by detectives from the Police Service of Northern Ireland. A search of the address is ongoing and inquiries continue. A police statement said this was a joint investigation involving the Police Service of Northern Ireland (PSNI), and detectives from the Metropolitan Police Cyber Crime Unit (MPCCU). News that the TalkTalk website had been hit by a "significant and sustained cyber-attack" broke last week.

The phone and broadband provider, which has over four million UK customers, said banking details and personal information could have been accessed. A criminal investigation was launched on Thursday. British man accused of hacking into US government systems. A 28-year-old British man has been arrested on suspicion of hacking into US military and US government computer systems. 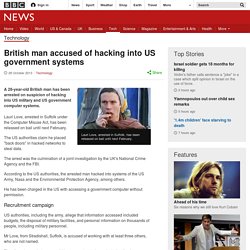 Lauri Love, arrested in Suffolk under the Computer Misuse Act, has been released on bail until next February. The US authorities claim he placed "back doors" in hacked networks to steal data.