Over 18? A Huge Fire in the Amazon Threatens Thousands of Indigenous People and an Uncontacted Tribe. The star witness in a case pitting rainforest villagers against a multinational oil giant has admitted to lying under oath in an effort to help Chevron avoid paying a $9.5 billion judgment for deliberate pollution of the Ecuadorian Amazon : worldnews. Indigenous Communities Take Chevron to Global Court for 'Crimes Against Humanity' ‘I drank the water and ate the fish. We all did. The acid has damaged me permanently’

You can’t see the old Chingola copper mine, with its smelter and refinery, from the village of Shimulala. 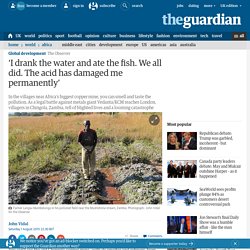 It’s miles away, beyond 300ft-high hills of waste tailings, the leach plant, the main pollution control dam and the 1,600ft-deep open pit that is one of Africa’s largest holes. But you can smell and taste the pollution from the biggest copper mine in Africa. If you pump a glass of water from the borehole outside the little church in Shimulala, you will see it is bright yellow, smells of sulphur and tastes vile. Mining giant Vedanta’s subsidiary company KCM drilled the borehole in 2010 for the village after the Mushishima stream was turned into a river of acid when mining chemicals spilled into it. But a leaked company letter says that chemists who tested borehole water there in 2011 found it tainted with copper residues, acid and minerals, and said it was unfit for consumption.

Prince528 comments on “No, you don’t.” That was the crowd’s grumbling response Tuesday night each time a Duke Energy representative said she empathized with people whose wells near the company’s coal ash ponds had been declared contaminated. “I know how y. China's famed Pearl River under denim threat. Agricultural runoff, industrial pollution big threats to Pearl River Region is 'blue jean capital' of the world Authorities estimate 200 million pairs of jeans made here yearly Concerns that denim waste hazardous to animals, humans Guangzhou, China (CNN) -- On the banks of the Pearl River, vendors set up shop daily at the Luwei village market. 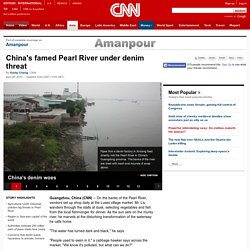 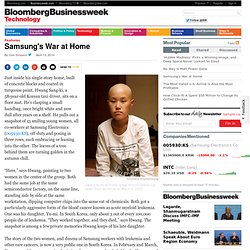 He’s clasping a small handbag, once bright white and now dull after years on a shelf. America's Most Contaminated Nuclear Site Is Vulnerable To Earthquakes. Minamata disease. Minamata disease was first discovered in Minamata city in Kumamoto prefecture, Japan, in 1956. 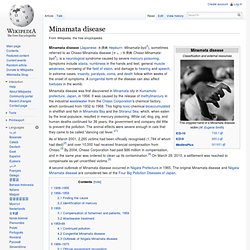 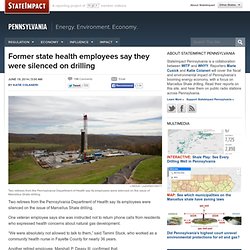 One veteran employee says she was instructed not to return phone calls from residents who expressed health concerns about natural gas development. “We were absolutely not allowed to talk to them,” said Tammi Stuck, who worked as a community health nurse in Fayette County for nearly 36 years. Another retired employee, Marshall P. Deasy III, confirmed that. Deepwater Horizon oil spill. The Deepwater Horizon oil spill (also referred to as the BP oil spill, the BP oil disaster, the Gulf of Mexico oil spill, and the Macondo blowout) began on 20 April 2010 in the Gulf of Mexico on the BP-operated Macondo Prospect. 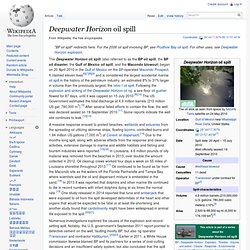 It claimed eleven lives[6][7][8][9] and is considered the largest accidental marine oil spill in the history of the petroleum industry, an estimated 8% to 31% larger in volume than the previously largest, the Ixtoc I oil spill. Following the explosion and sinking of the Deepwater Horizon oil rig, a sea-floor oil gusher flowed for 87 days, until it was capped on 15 July 2010.[8][10] The US Government estimated the total discharge at 4.9 million barrels (210 million US gal; 780,000 m3).[3] After several failed efforts to contain the flow, the well was declared sealed on 19 September 2010.[11] Some reports indicate the well site continues to leak.[12][13] Numerous investigations explored the causes of the explosion and record-setting spill. Background[edit] Corporate Watch : Nestlé SA : Corporate Crimes. Unethical Marketing of Artificial Baby Milk Since 1977 (with a break from 1984-1988), Nestlé has been the subject of an international boycott for its dubious marketing strategies. 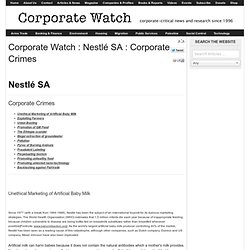 The World Health Organisation (WHO) estimates that 1.5 million infants die each year because of inappropriate feeding, because children vulnerable to disease are being bottle-fed on breastmilk substitutes rather than breastfed whenever possible[Footnote: www.babymilkaction.org]. As the world's largest artificial baby milk producer controlling 40% of the market, Nestlé has been seen as a leading cause of this catastrophe, although other companies, such as Dutch company, Dumico and US company, Mead Johnson have also been implicated.

Artificial milk can harm babies because it does not contain the natural antibodies which a mother's milk provides. It is also extremely expensive, so that in many poor countries people dilute it too much to make it last longer, which causes malnutrition.