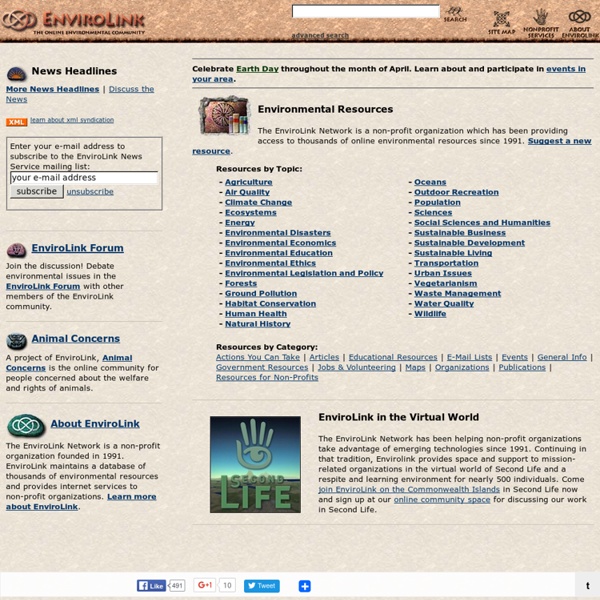 CleanTechnica: Cleantech innovation news and views Ecological Footprint Quiz by Center for Sustainable Economy environmentalframing.org Geology.com - Earth Science News, Maps, Dictionary, Articles, Jobs The EnviroLink Network - Certificate in Ecological Education Detailed Information: Throughout North America and the world, people and organizations are increasingly aware of the emergence of ecological crises and the need for an ecologically literate citizenry. In contrast to previous decades when outdoor and environmental education were marginalized as peripheral subjects in schools and extracurricular areas like girl guides, scouting and camping, the possibilities for ecological education today are expanding to become a more substantive part of school, recreation, leisure, cultural, and social service programs. This drive for eco-literacy is reflected in the growing demand for eco-tourism employees with high levels of education to provide information, analysis, and education about ecology and environment in a manner that supports increasingly critical learners. developments to preserve local and primary environments. education which recommend pedagogical practices for ecological sustainability, students have few opportunities to be certified

The Story of Stuff Project The World's Water Water Conflict Chronology In an ongoing effort to understand the connections between water resources, water systems, and international security and conflict, the Pacific Institute initiated a project in the late 1980s to track and categorize events related to water and conflict, which has been continuously updated since. Our new format, updated November 2009, presents the information three ways, to better illustrate how conflicts over water impact history: View the Water Conflict Chronology (updated 11/09) Changes to Chronology Reflect New Data Recent world events from the Middle East to China to India to Ethiopia and other regions have, unfortunately, continued to lead to new entries. Control of Water Resources (state and non-state actors): where water supplies or access to water is at the root of tensions. It will be clear to even the casual reader that these definitions are imprecise and that single events can fall into more than one category, depending on perception and definitions.