Koko The Gorilla Has An Important Message For Humanity. Koko the gorilla makes her feelings on climate change known using sign language. 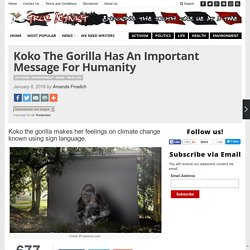 Credit: IFLScience.com Koko the gorilla isn’t any ordinary primate. Born in the San Francisco Zoo in 1971, Koko was taught how to communicate American Sign Language at an early age. According to her trainers, she was able to learn vocabulary at the same rate as a child with learning disabilities and now knows around 1,100 signs. Of course, Koko isn’t the first great ape to learn sign language, but she is definitely the most famous!

Now, Koko is appearing on screen once again, but this time with an important message for humanity. In the video (above), she appears to call mankind “stupid” for ignoring the responsibility to protect and care for the Earth, while also claiming that “Earth Koko love.” According to The Gorilla Foundation, the video was created from footage of Koko reacting to being informed of what was at stake at COP21, the climate change talks in Paris. What are your thoughts? MAN vs EARTH. Activists Replace 600 Advertisements In Paris With Truthful Art [Watch] For the Brandalism project, 82 artists from 19 countries joined forced to protest the corporate takeover of COP 21. 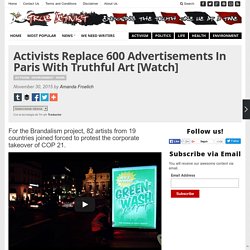 Just days before the launch of the UN Climate Conference in Paris, 82 artists from 19 different countries collaborated on a project to protest the corporate takeover of COP 21 and urge the public to care about climate change. The activists replaced 600 advertisements throughout the city with artwork that calls out heads of state and corporations that have been complicit in the destruction of the Earth’s climate, reports AddictingInfo. Their aim was to reveal the connections between advertising, the promotion of consumerism and climate change. One might say they succeeded.

Rebellious Group Splices Fruit-Bearing Branches Onto Urban Trees. 4685 0ShareNew The trees that line most city streets are pretty to look at, but they're not good for much else. 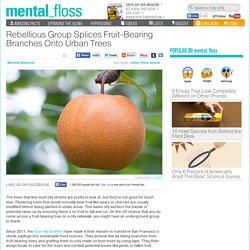 Flowering trees that would normally bear fruit like pears or cherries are usually modified before being planted in urban areas. This saves city workers the hassle of potential clean-up by ensuring there’s no fruit to fall and rot. On the off-chance that you do come across a fruit-bearing tree on a city sidewalk, you might have an underground group to thank. Since 2011, the Guerrilla Grafters have made it their mission to transform San Francisco’s sterile saplings into sustainable food sources. The organization claims to have grafted about 50 trees in the Bay Area, with each effort being executed in secret. [h/t My Modern Met] City-Dwellers Can Become Self-Sufficient Gardeners With This Indoor Vertical ... The 7-foot tall NutriTower is specifically designed to fit in small spaces and can hydroponically grow a variety of edible plants. 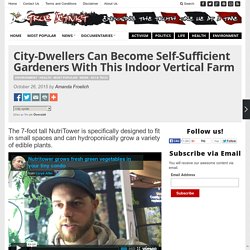 If something were to happen today, tomorrow, six months down the road, or even three years into the future, would you be able to sustain yourself and your family? A large percent of Americans do not have any resources – financial or otherwise – saved up in a case of an impending disaster, which would make them incredibly dependent on the government if hard times hit (that is if the government was still functioning).

While one may always purchase silver or stock up on canned goods, having a sustainable source of live, nutrient-dense food could be one’s saving’s grace in the wake of an economic disaster. For this reason and many more, this gorgeous vertical farm is a God-send for many urban-dwellers who may want to reduce their food costs or just live more sustainably while in the city. Credit: Nutritower. The International Energy Agency consistently underestimates wind and solar po... The International Energy Agency was created in 1974 by countries that had just been through a bruising oil crisis (and were headed for another). 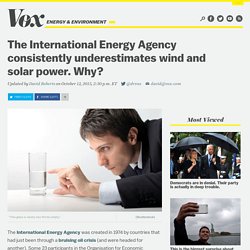 Some 23 participants in the Organisation for Economic Cooperation and Development (OECD) founded the IEA to gather and share information about energy, model future energy trends, and help mitigate the adverse impacts of (or avoid) subsequent energy crises. Since then, IEA has become a widely respected source of energy data and analysis. Its annual World Energy Outlook (WEO) is considered the gold standard in energy modeling, producing endless media coverage and shaping the assumptions of policymakers and the investment class.

It is somewhat vexing, then, that the IEA has always been, and remains, dismally pessimistic about wind and solar energy. This pessimism has led it to underestimate wind and solar again and again, a track record of failure one might think would trouble an agency known for the quality of its modeling. (Energy Watch Group) Lake of fire: Bellandur Lake in India spontaneously combusts. A canal which once carried water from Bellandur Lake to Varthur Lake. 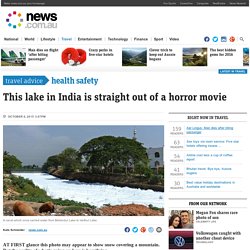 AT FIRST glance this photo may appear to show snow covering a mountain. But the reality of what’s going on here is horrifying. This is actually an incredibly rare and very unnatural phenomenon. It’s a lake in India that’s so toxic that it froths over and even bursts into flames. It’s a scene straight out of a horror movie.