Nanoparticles Harm the Environment. Nanoparticles used in sunscreens and cosmetics may be harmful to the environment, according to U.S. scientists who have been studying the effects of nanos on living organisms. 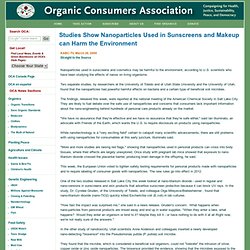 Nanoparticles in Soil Can Harm Plants. (Beyond Pesticides, August 13, 2010) A new study finds that silver nanoparticles, which are used in consumer products and in hospitals for their antimicrobial properties, can harm plant life when it enters into the natural environment. 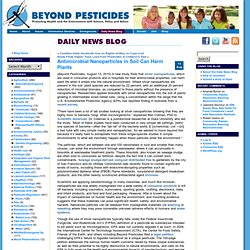 Where silver nanoparticles are present in the soil, plant species are reduced by 22 percent, with an additional 20 percent reduction of microbial biomass, as compared to those plants without the presence of nanoparticles. Researchers applied biosolids with silver nanoparticles into the soil of plants growing in intermediate sized rubber tubs, using a concentration within the range that the U.S. Environmental Protection Agency (EPA) has reported finding in biosolids from a recent survey. “There have been a lot of lab studies looking at silver nanoparticles showing that they are highly toxic to bacteria, fungi, other microorganisms,” explained Ben Colman, PhD to Scientific American. Dr. Source: Scientific American. Potential environmental impact of nanoparticles studied through aluminum in soil. Nanoparticles Damage Microbes.

Nanoparticles in sunscreens, cosmetics and hundreds of other consumer products may pose risks to the environment by damaging beneficial microbes, scientists reported Tuesday. 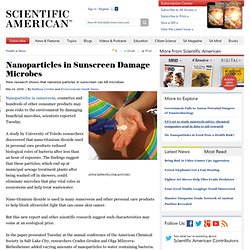 A study by University of Toledo researchers discovered that nano-titanium dioxide used in personal care products reduced biological roles of bacteria after less than an hour of exposure. The findings suggest that these particles, which end up at municipal sewage treatment plants after being washed off in showers, could eliminate microbes that play vital roles in ecosystems and help treat wastewater. Nano-titanium dioxide is used in many sunscreens and other personal care products to help block ultraviolet light that can cause skin cancer.

But this new report and other scientific research suggest such characteristics may come at an ecological price. The scientists saw significant damage to the bacteria’s cell walls after adding 10 to 100 milligrams per liter of the nanosubstance. Nanoparticles Decontaminate Groundwater - Pollution - WaterLink International. Contamination of Groundwater. Iron nanoparticles 1,000 times thinner than a human hair have demonstrated an unprecedented ability to clean contaminated groundwater since they were invented 10 years ago at Lehigh. 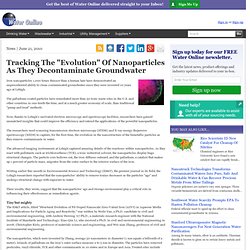 Facing the Dangers of Nanotech. Tiny Toxins? It was just the type of event that many in the nanotechnology community have feared – and warned against. 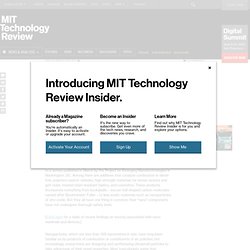 In late March, six people went to the hospital with serious (but nonfatal) respiratory problems after using a German household cleaning product called Magic Nano. Though it was unclear at the time what had caused the illnesses – and even whether the aerosol cleaner contained any nanoparticles – the events reignited the debate over the safety of consumer products that use nanotechnology.

The number of products fitting that description has now topped 200, according to a survey published in March by the Project on Emerging Nanotechnologies in Washington, DC. Among them are additives that catalyze combustion in diesel fuel, polymers used in vehicles, high-strength materials for tennis rackets and golf clubs, treated stain-resistant fabrics, and cosmetics. [Click here for a table of recent findings on toxicity associated with nano materials and devices.] Nanotechnology in Consumer Product. After more than twenty years of basic and applied research, nanotechnologies are gaining in commercial use. 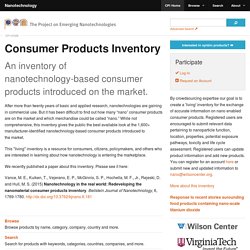 But it has been difficult to find out how many “nano” consumer products are on the market and which merchandise could be called “nano.” While not comprehensive, this inventory gives the public the best available look at the 1,600+ manufacturer-identified nanotechnology-based consumer products introduced to the market. This "living" inventory is a resource for consumers, citizens, policymakers, and others who are interested in learning about how nanotechnology is entering the marketplace. We recently published a paper about this inventory.

Please see it here: Vance, M. Nanotubes in Clothing. Elegance is as important in scientific design as it is in art and architecture, chemical engineer Nicholas Kotov believes. 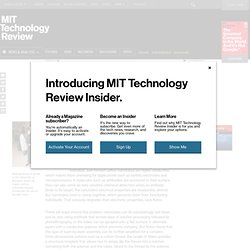 Sitting in his austere office at the University of Michigan, in Ann Arbor, he shows off a swatch of black cotton; in heft and feel it’s similar to a soft, lightweight dress shirt. But Kotov has transformed the fabric into a biosensor and an electrical conductor simply by dipping it into a solution of carbon nanotubes, antibodies, and a polymer. Individual, well-formed carbon nanotubes are highly conductive, which makes them promising fo­r applications such as battery electrodes and microprocessors. If molecules such as antibodies are anchored to their surface, they can also serve as very sensitive chemical detectors: when an antibody binds to its target, the nanutobe’s electrical properties are measurably altered. But nanotubes tend to clump together, which prevents them from functioning individually. Nanorisk: Insider Health Report. Why a newsletter about nanotechnology risks? 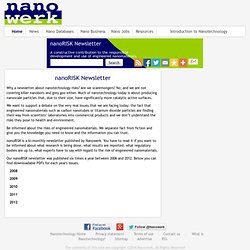 Are we scaremongers? No; and we are not covering killer nanobots and grey goo either. Much of nanotechnology today is about producing nanoscale particles that, due to their size, have significantly more catalytic active surfaces. We want to support a debate on the very real issues that we are facing today: the fact that engineered nanomaterials such as carbon nanotubes or titanium dioxide particles are finding their way from scientists’ laboratories into commercial products and we don’t understand the risks they pose to health and environment.

Be informed about the risks of engineered nanomaterials. NanoRISK is a bi-monthly newsletter published by Nanowerk. Nanotech in your vitamins. The ability of the Food and Drug Administration (FDA) to regulate the safety of dietary supplements using nanomaterials is severely limited by lack of information (Translation: the field is so new that there is little hard evidence to go on), lack of resources and the agency's lack of statutory authority (the ability to accept or ban a pratice, within their current scope, and the total lack of an agency that does have the authority to collaborate with) in certain critical areas, according to a new expert report released by the Project on Emerging Nanotechnologies (PEN). 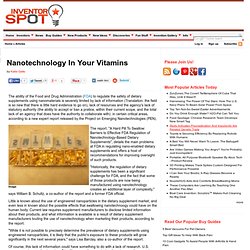 Image The report, "A Hard Pill To Swallow: Barriers to Effective FDA Regulation of Nanotechnology-Based Dietary Supplements", details the main problems at FDA in regulating nano-enabled dietary supplements and offers a host of recommendations for improving oversight of such products. Big Pharma nanotechnology encodes pills with tracking data that you swallow. Implications and Interactions.

Nanosilver classified as Poison. Nanotubes Could Cause Cancer. Certain types of carbon nanotubes could cause the same health problems as asbestos, according to the results of two recent studies. 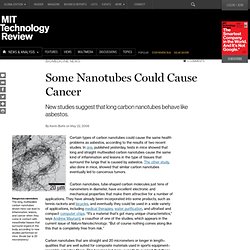 In one, published yesterday, tests in mice showed that long and straight multiwalled carbon nanotubes cause the same kind of inflammation and lesions in the type of tissues that surround the lungs that is caused by asbestos. The other study, also done in mice, showed that similar carbon nanotubes eventually led to cancerous tumors. Carbon nanotubes, tube-shaped carbon molecules just tens of nanometers in diameter, have excellent electronic and mechanical properties that make them attractive for a number of applications. They have already been incorporated into some products, such as tennis rackets and bicycles, and eventually they could be used in a wide variety of applications, including medical therapies, water purification, and ultrafast and compact computer chips.

Nanoparticle: Neurological dysfunction. Breathing Nanoparticles. Scientists have tracked the flow of nanoparticles from the lungs to the bloodstream for the first time. The work could lead to the development of new drugs and help researchers understand how pollution can cause respiratory problems. Researchers from Beth Israel Deaconess Medical Center and the Harvard School of Public Health injected fluorescent nanoparticles into rats’ lungs and used near-infrared imaging to watch as the particles moved through their bodies.

The researchers tracked how far—and how quickly—nanoparticles of different size, shape, and surface charge were able to travel after being injected. They found that nanoparticles between six and 34 nanometers in diameter were able to get past the lung’s defenses to reach the lymph nodes and the bloodstream. This finding may provide valuable guidelines for designing nanoparticle-based drugs. Nanoparticles damage lungs.