EARTH 103: Earth in the Future. Background Increasing levels of CO2 in the atmosphere are slowly causing the surface of the ocean to become more acidic. 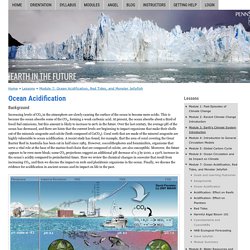 This is because the ocean absorbs some of the CO2, forming a weak carbonic acid. At present, the ocean absorbs about a third of fossil fuel emissions, but this amount is likely to increase to 90% in the future. Over the last century, the average pH of the ocean has decreased, and there are hints that the current levels are beginning to impact organisms that make their shells out of the minerals aragonite and calcite (both composed of CaCO3). Coral reefs that are made of the mineral aragonite are highly vulnerable to ocean acidification. Changes in atmospheric CO2 and consequences on the oceans.

The following video provides a thorough overview of the potential impact of acidification on the oceans. Chemistry 101 As we discussed in Module 5 on the Carbon Cycle, the absorption of CO2 in the ocean forms weak carbonic acid (H2CO3). Credit: National Academies. 1. Introduction to Climate Change.

A Disappearing Planet. Given the natural extinction rate, we would not expect more than one mammal species go extinct per century. 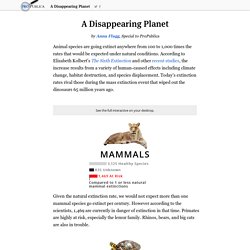 Climatestewards2011 [licensed for non-commercial use only] The Lorax - Teaching Children Philosophy. Author: Dr. 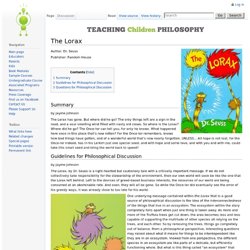 Seuss Publisher: Random House Summary by jayme johnson The Lorax has gone. Guidelines for Philosophical Discussion The Lorax , by Dr. One underlying message contained within the Lorax that is a good source of philosophical discussion is the idea of the interconnectedness of the things that live in an ecosystem. Answers to many of the questions about our social responsibility to the ecosystem seem currently to be driven by the notion of sustainability . So far the discussion has been geared to the idea of social responsibility , but we can also ask about what the nature of social responsibility itself is. One final interesting philosophical topic that gets raised in the Lorax might be called the intrinsic value argument for environmental preservation . Questions for Philosophical Discussion The Lorax tries to speak for the trees.

When the Lorax first appears to speak on behalf of the tress, the Once-ler claims he is doing no harm by cutting down Truffula Trees to make Thneeds. 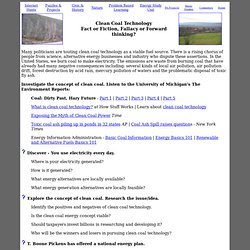 There is a rising chorus of people from science, alternative energy businesses and industry who dispute these assertions. In the United States, we burn coal to make electricity. The emissions are waste from burning coal that have already had many negative consequences including: several kinds of local air pollution, air pollution drift, forest destruction by acid rain, mercury pollution of waters and the problematic disposal of toxic fly ash.

Investigate the concept of clean coal. Listen to the University of Michigan's The Environment Reports: Coal: Dirty Past, Hazy Future - Part 1 | Part 2 | Part 3 | Part 4 | Part 5 What is clean coal technology? Discover - You use electricity every day. Where is your electricity generated? Explore the concept of clean coal. Identify the positives and negatives of clean coal technology. T. Alternative thinking: Extensions: Show what you know Careers for the future: , Symbol, Education.