The Earthquake That Will Devastate Seattle. When the 2011 earthquake and tsunami struck Tohoku, Japan, Chris Goldfinger was two hundred miles away, in the city of Kashiwa, at an international meeting on seismology.

As the shaking started, everyone in the room began to laugh. Earthquakes are common in Japan—that one was the third of the week—and the participants were, after all, at a seismology conference. Then everyone in the room checked the time. Seismologists know that how long an earthquake lasts is a decent proxy for its magnitude. The 1989 earthquake in Loma Prieta, California, which killed sixty-three people and caused six billion dollars’ worth of damage, lasted about fifteen seconds and had a magnitude of 6.9. When Goldfinger looked at his watch, it was quarter to three. It was March.

How Soil Microbes Affect the Environment. Janet Jansson first started to wonder about the vast universe of underground life as a student at New Mexico State University in the late 1970s. 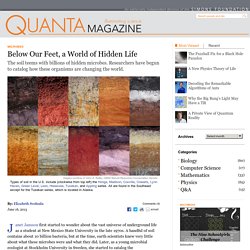 A handful of soil contains about 10 billion bacteria, but at the time, earth scientists knew very little about what these microbes were and what they did. Later, as a young microbial ecologist at Stockholm University in Sweden, she started to catalog the microorganisms she collected during soil sampling trips, deciphering their genetic code so she could understand both their internal workings and how they fit into their underground habitat. As Jansson dug, though, she kept running into a problem. The main method then used to amplify and analyze stretches of DNA wasn’t powerful enough to reveal all the workings of a single microorganism, much less an entire community of them. Then, soon after the turn of the century, new high-octane DNA sequencing methods made it possible to sequence thousands or even millions of genes almost instantly.

New Study Shows That as the Climate Warms, Melting of Alaskan Glaciers is Adding Significantly to Sea Level Rise - ImaGeo. An animation of Landsat satellite images showing dramatic shrinkage of the Columbia Glacier in Alaska. 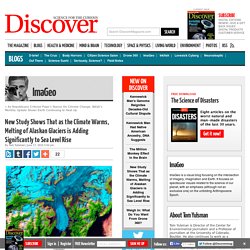 The animation pauses for extra time on the first image, acquired in 1986, and the last one from 2914. (Images: NASA Earth Observatory. Animation: Tom Yulsman) Superwheat Kernza Could Save Our Soil and Feed Us Well. Kernza’s arrival has been a long time coming. 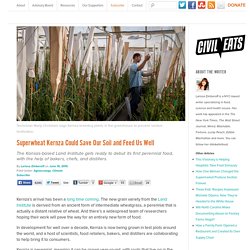 The new grain variety from the Land Institute is derived from an ancient form of intermediate wheatgrass, a perennial that is actually a distant relative of wheat. And there’s a widespread team of researchers hoping their work will pave the way for an entirely new form of food. In development for well over a decade, Kernza is now being grown in test plots around the world, and a host of scientists, food retailers, bakers, and distillers are collaborating to help bring it to consumers. Kernza is perennial, meaning it can be grown year-round, with roots that live on in the ground through winter. Corn, wheat, and most of the other grains we eat, on the other hand, are annual crops, which must be replanted anew every year, and require seeds, fertilizers, and pesticides for each planting. That’s not all. Scientists Find Alarming Deterioration In DNA Of The Urban Poor. The urban poor in the United States are experiencing accelerated aging at the cellular level, and chronic stress linked both to income level and racial-ethnic identity is driving this physiological deterioration. 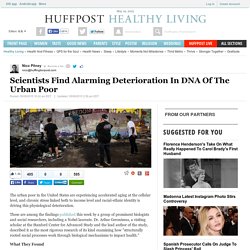 These are among the findings published this week by a group of prominent biologists and social researchers, including a Nobel laureate. Dr. Arline Geronimus, a visiting scholar at the Stanford Center for Advanced Study and the lead author of the study, described it as the most rigorous research of its kind examining how "structurally rooted social processes work through biological mechanisms to impact health. " What They Found Researchers analyzed telomeres of poor and lower middle-class black, white, and Mexican residents of Detroit. Evidence increasingly points to telomere length being highly predictive of healthy life expectancy.

James Howard Kunstler: The ghastly tragedy of the suburbs. Fight Continues to Wrest Control of Sacred Site Back From Copper Mining Co. This one appears headed for a 12-round title bout as the San Carlos Apache tribe continues its battle with Resolution Copper Co. over the issue of sacred land at Oak Flats. 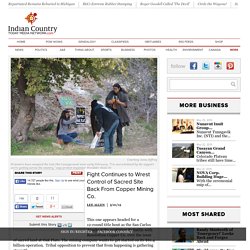 The mining company wants to get started on its $61.4 billion operation. Tribal opposition to prevent that from happening is gathering strength. While snowballs are not likely in either Hell or Arizona, the latter may be disproving that theory as organized opposition continues to grow larger aimed at keeping sacred tribal lands just that, sacred and tribal. RELATED: Hundreds Gather at Oak Flat to Fight for Sacred Apache Land “What once was a struggle to protect our most sacred site is now a battle,” said current tribal chairman Terry Rambler. Selling the Desert's Water-Conservation Lessons to the Rest of the World. The Israeli farmers who pioneered the revolutionary technology known as drip irrigation weren’t trying to solve one of the world’s most urgent problems. 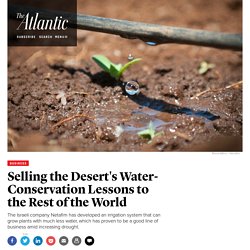 They were just trying to survive. They lived in the desert, and they didn’t have enough water to grow their crops. One day, they met an engineer named Simcha Blass who told them about his amazing new invention. Two young scientists break down plastics with bacteria. Richard Turere: My invention that made peace with lions.