Book review of Separate: The Story of Plessy v. Ferguson, and America's Journey from Slavery to Segregation by Steve Luxenberg. Malcolm X at Oxford: 'They're going to kill me soon' Malcolm X became internationally famous the day after President John F Kennedy was assassinated. 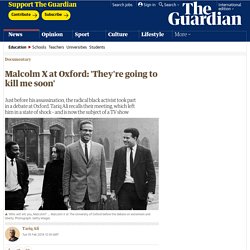 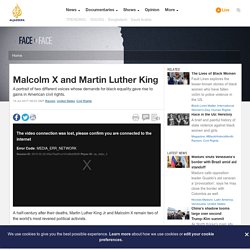 They were both respected leaders of the American Civil Rights movement, struggling for racial equality and freedom. But at the start of the 1960s, the media were constructing a conflict that stirred the civil rights debate: Malcolm X versus Reverend Martin Luther King. While King advocated non-violent direct action and passive resistance to achieve equal civil rights, Malcolm X was the spokesman for the Nation of Islam (NOI), the black Muslim movement which violently rejected white America and its Christian values, and preached the supremacy of blacks over whites. He promoted a segregationist approach that sought to instil in blacks a pride in their African heritage, whereas Martin Luther King believed that self-respect would come through integration. 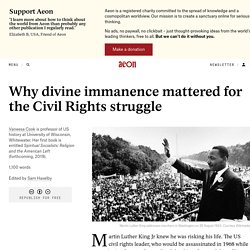 Unseen photographs of civil rights conflict in Birmingham, Alabama, 1963. This Map Shows Over a Century of Documented Lynchings in the United States. The Civil War may have freed an estimated 4 million slaves, but that wasn’t nearly the end of acts of racial violence committed against African Americans. 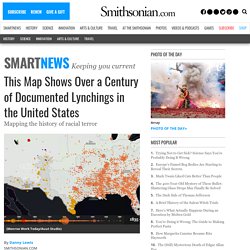 Acts of domestic terrorism against black people include the thousands murdered in public lynchings. Now, an interactive map provides a detailed look at almost every documented lynching between the 1830s and 1960s. The map is part of a website created by a group called Monroe Work Today, which takes its name from an early 20th century sociologist named Monroe Nathan Work, who spent decades compiling data and statistics on lynchings. The day nine young students shattered racial segregation in US schools. Minnijean Brown Trickey didn’t intend to make a political statement when she set off with two friends for her first day in high school. 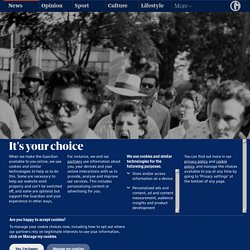 She was, after all, only 15. Revisionist History Podcast. People's Century Part 18 1957 Skin Deep. The Fight For Civil Rights Is Far From Over. American Archive of Public Broadcasting Search Results. 'Is This America?': 50 Years Ago Sharecroppers Challenged Mississippi Apartheid, LBJ, and the Nation. By Julian Hipkins III and Deborah Menkart Fifty years ago this month, Mississippi sharecropper Fannie Lou Hamer gripped the nation with her televised testimony of being forced from her home and brutally beaten (suffering permanent kidney damage) for attempting to exercise her constitutional right to vote. 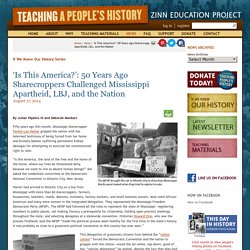 What Nelson Mandela can teach us all about violence. Mandela and the Question of Violence. I was right to be wrong, while you and your kind were wrong to be right. 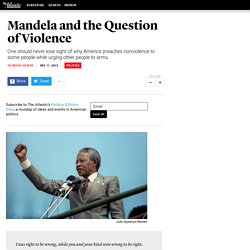 —Pierre Courtade I have the misfortune of being near the end of Tony Judt's Postwar at a moment when of the great figures of our history, Nelson Mandela, has passed. Judt's gaze is relentless. Lesson 2: Black Separatism or the Beloved Community? Malcolm X and Martin Luther King, Jr. Activity 1. 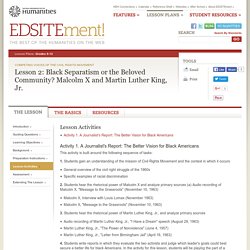 A Journalist's Report: The Better Vision for Black Americans This activity is built around the following sequence of tasks: 1. Students gain an understanding of the mission of Civil Rights Movement and the context in which it occurs. FBI Monitored Muhammad Ali Over Muslim Ties. Why We Should Teach About the FBI’s War on the Civil Rights Movement. By Ursula Wolfe-Rocca This month marks the 45th anniversary of a dramatic moment in U.S. history. 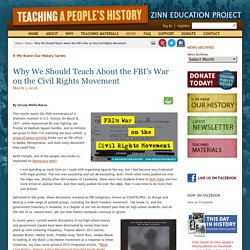 On March 8, 1971—while Muhammad Ali was fighting Joe Frazier at Madison Square Garden, and as millions sat glued to their TVs watching the bout unfold—a group of peace activists broke into an FBI office in Media, Pennsylvania, and stole every document they could find. ‘I had it easy: I was never beaten’: fighting segregation in the US south.

I was a freshman at Swarthmore College, Pennsylvania, when I first encountered the Student Nonviolent Coordinating Committee, and it changed my life. 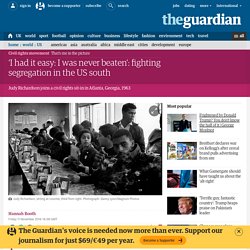 I used to catch a bus at weekends to Cambridge, Maryland, to work with an inspirational civil rights activist called Gloria Richardson (no relation), who was working with SNCC – pronounced “snick” – to desegregate the city’s public places. I liked the sound of SNCC’s work, so I left Swarthmore, supposedly for one semester, to work at its national office in Atlanta. I never went back. I grew up in New York state, where my father was a respected union man. ‘Stereotypes of the Black Panthers are far from the truth’: marching in Philadelphia, 1971. When the Black Panthers came to west Philadelphia, their boldness and courage struck a chord with my friends and me. They handed out papers with graphic depictions of black men and women standing up for themselves and demanding freedom. 19 maps and charts that explain voting rights in America.

By Dara Lind on August 6, 2015. 4. Radical Reconstruction. Dana Mejías Teacher San Diego, CA. Electoral College is 'vestige' of slavery, say some Constitutional scholars. The Federal Convention convened in the State House (Independence Hall) in Philadelphia on May 14, 1787, to revise the Articles of Confederation. Photo by Library of Congress When the founders of the U.S. Constitution in 1787 considered whether America should let the people elect their president through a popular vote, James Madison said that “Negroes” in the South presented a “difficulty … of a serious nature.”

During that same speech on Thursday, July 19, Madison instead proposed a prototype for the same Electoral College system the country uses today. Top 10 Civil Rights Protest Songs Of All Time. Source: Getty Images / Getty Images Martin Luther King knew that the Civil Rights movement needed a soundtrack and that every hero needed theme music. The Civil Rights movement incorporated jazz, folk, R&B and gospel to use music that everybody could relate to and be inspired by to help change America in the 1950s and 1960s. Journal E: Without Sanctuary: Lynching Photography in America.

What Happened to the Civil Rights Movement After 1965? Don’t Ask Your Textbook. Fifty years ago this week, Student Nonviolent Coordinating Committee chairperson Stokely Carmichael made the famous call for “Black Power.” Carmichael’s speech came in the midst of the “March Against Fear,” a walk from Memphis, Tennessee, to Jackson, Mississippi, to encourage African Americans to use their newly won right to vote. But while almost every middle and high school student learns about the Civil Rights Movement, they rarely learn about this march—or the related struggles that continued long after the Voting Rights Act.