Syria. Ukraine. Benghazi: Explained. Venezuelan Army Can Shoot Protesters, Effective Immediately. Oldmonty comments on Indian mob breaks into jail, beats rape suspect to death. Corruption and violence threaten to destabilise country after mass murder of students and scandal over presidential home : worldnews. In Gaza, burying those killed by Israeli airstrikes is getting more dangerous. A Palestinian man is overcome by emotion as he watches rescuers carry a body from the rubble of a house in Gaza City that was destroyed by an Israeli missile strike. 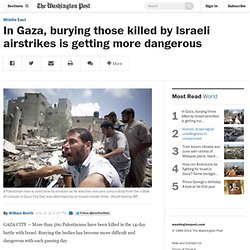 (Khalil Hamra/AP) GAZA CITY — More than 560 Palestinians have been killed in the 14-day battle with Israel. Burying the bodies has become more difficult and dangerous with each passing day. Movement can be a risky sprint not only for ambulances but also for the beat-up vans that ferry the dead to cemeteries. The central morgue in Gaza City is overflowing, its wheezing refrigerators losing the struggle against the smell. In the early days of the current Israeli offensive against Hamas, the militant movement that controls the Gaza Strip, people took bodies to the mosque and gathered afterward in mourning tents. No more. Thailand's army has declared martial law. : worldnews. Hong Kong Protests Explained.

Are Hong Kong & Macau Countries? 161719 comments on 'All Muslims leave... we only want to kill non-Muslims': Gunmen massacre at least 22 in Kenyan shopping mall after releasing anyone who could prove they were Islamic by reciting a prayer. Right now: Venezuelan students are being silenced with bullets : videos. 7 Ways My Modern Country Turned Into a Dystopia Overnight. #3. 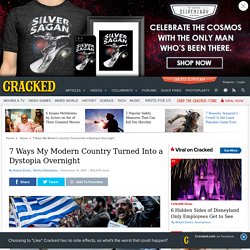 Crime and Suicide Rates Skyrocket Milos Bicanski/Getty Images News/Getty Images Unemployment creates a domino effect. If I lose my job, I am forced to reduce my army of Ferraris down to seven, and can only eat caviar-sprinkled truffles straight off the thighs of a male model twice a week. This means less work for professional Ferrari polishers and truffle-sprinklers, which in turn means they cannot afford somebody else's services ... soon, nobody is working anymore, because nobody can afford anything.

Vladimir Rys/Getty Images News/Getty Images So please, come visit Greece! Unsurprisingly, suicides and crime have spiked. Svetlanka777/iStock/Getty Images "It's Raining Men, Hallelujah. " -- Leonard Cohen Roughly 10,000 suicides in the United States, the European Union, and Canada from 2007 to 2010 can be blamed on the Great Recession. . #2. Venezuela student protest ends in deadly violence. 13 February 2014Last updated at 07:01 ET Police were out in force at the anti-government rally in Caracas on Wednesday At least three people were shot dead as violence erupted during anti-government protests in the Venezuelan capital, Caracas, on Wednesday. 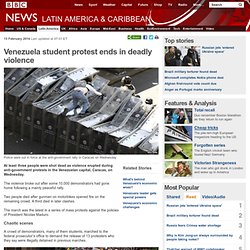 The violence broke out after some 10,000 demonstrators had gone home following a mainly peaceful rally. Two people died after gunmen on motorbikes opened fire on the remaining crowd. A third died in later clashes. You won't hear about the Bosnian revolution in news: Protesters ask for the abolition of "economic model that favors only the rich" : worldnews. I believe the government should be allowed to view my e-mails, tap my phone calls, and view my web history for national security concerns. CMV : changemyview. Brazil to order army into Rio slums as violence escalates before World Cup. The Brazilian authorities are poised to send the army into the slums of Rio de Janeiro less than three months before the World Cup. 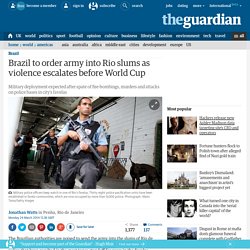 The move follows attacks on police that have resulted in the most tense standoff for years in the favelas. The Rio state governor, Sérgio Cabral, has requested the reinforcements after assaults on police bases, apparently co-ordinated by the city's biggest gang, Comando Vermelho. An escalation of murders, revenge killings and fire-bombings have prompted talk of a war between the police and gangsters. Favela residents and NGOs say the situation is now more tense than at any time since 2010, when the authorities began a "pacification" programme to regain control of communities from armed traffickers. Brazilian army occupies Rio shantytown ahead of World Cup. Soldiers in full combat gear move silently through a sprawling shantytown in northern Rio de Janeiro, pointing weapons down narrow alleys and poking through sacks of cement in search of drugs. 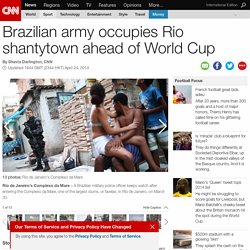 Residents walk by, barely looking at the troops sent in to occupy the Complexo da Mare as an emergency response to escalating violence in the city's notorious favelas. Some 2,500 army troops and marines have moved in to reinforce police in an operation aimed at securing the slum, home to 130,000 people, ahead of the World Cup, which runs from June 12 to July 13..

Seizing control from drug gangs was deemed a priority because the shantytown lies just a few kilometers from Rio's international airport. "It's not a peaceful operation because we have three different criminal gangs here and they are rivals," Gen. Roberto Escoto told CNN. The Rio state government requested the army occupation after a series of attacks against police posts. "It's an emergency," Escoto said.