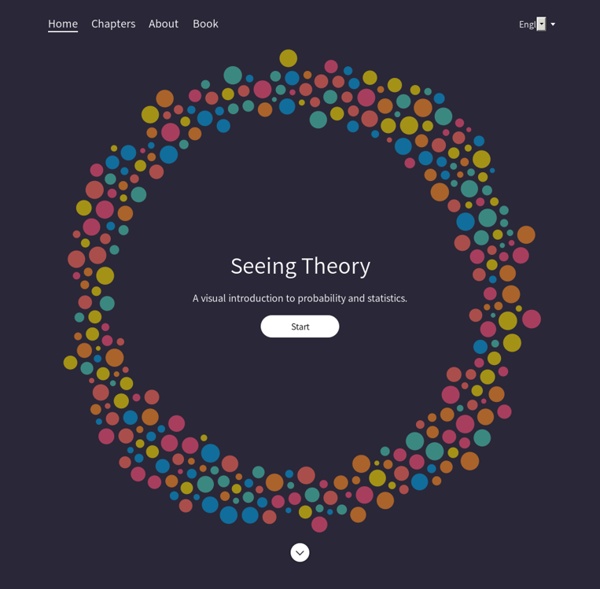 Seeing Theory is a project designed and created by Daniel Kunin with support from Brown University's Royce Fellowship Program. The goal of the project is to make statistics more accessible to a wider range of students through interactive visualizations. Statistics is quickly becoming the most important and multi-disciplinary field of mathematics. According to the American Statistical Association, "statistician" is one of the top ten fastest-growing occupations and statistics is one of the fastest-growing bachelor degrees. Statistical literacy is essential to our data driven society. Yet, for all the increased importance and demand for statistical competence, the pedagogical approaches in statistics have barely changed.

Proko Full Access to Figure Drawing Videos - miss new tutorials, signup for my mailing list - Let's get into shading a drawing! We'll explore form, planes and light on form. I'll guide you through making an object feeling 3 dimensional by indicating the elements of light on form - highlight, center light, halftones, core shadow, reflected light, cast shadow and occlusion shadow. How the local value of the object effects the tones. And how does intensity of light affect tones.

The Mathematics of Machine Learning In the last few months, I have had several people contact me about their enthusiasm for venturing into the world of data science and using Machine Learning (ML) techniques to probe statistical regularities and build impeccable data-driven products. However, I have observed that some actually lack the necessary mathematical intuition and framework to get useful results. This is the main reason I decided to write this blog post. Recently, there has been an upsurge in the availability of many easy-to-use machine and deep learning packages such as scikit-learn, Weka, Tensorflow, R-caret etc. Unanswered emails were the bane of my life - until I spent a month in search of inbox nirvana At 5.10pm on New Year’s Day, I had 16,516 unread emails in my inbox. At 5.11pm on New Year’s Day, my inbox was empty. As chaos vanished to nothingness, a euphoric feeling of purity washed over me. Bright sunshine burst through the windows turning my living room gold and, from nowhere, a heavenly choir sang.

A036057 M. F. Hasler, Table of n, a(n) for n = 1..844 (data from E. Learn to Play Chess Chess Corner Home Learn Play Games Fun World Champions Ecards Book Store Links Learn to Play Chess Unlearning descriptive statistics If you've ever used an arithmetic mean, a Pearson correlation or a standard deviation to describe a dataset, I'm writing this for you. Better numbers exist to summarize location, association and spread: numbers that are easier to interpret and that don't act up with wonky data and outliers. Statistics professors tend to gloss over basic descriptive statistics because they want to spend as much time as possible on margins of error and t-tests and regression. Fair enough, but the result is that it's easier to find a machine learning expert than someone who can talk about numbers. Forget what you think you know about descriptives and let me give you a whirlwind tour of the real stuff.

An indie guide to releasing your music Digital [Overview | Mastering | Distro | Bandcamp | Publishing, Licensing, Copyrights] | Overview With a budget of a few hundred dollars... you can get your digital album professionally Mastered and make it available on all the popular stores and streaming services.