Netiquette. Netiquette Rules: The Right Way to Send Business E-mails. Despite the growing prevalence of texting, instant messenging apps and social networks in the business world, e-mail remains one of the most popular high-tech ways for modern professionals to communicate. 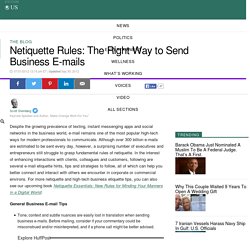 Although over 300 billion e-mails are estimated to be sent every day, however, a surprising number of executives and entrepreneurs still struggle to grasp fundamental rules of netiquette. In the interest of enhancing interactions with clients, colleagues and customers, following are several e-mail etiquette hints, tips and strategies to follow, all of which can help you better connect and interact with others we encounter in corporate or commercial environs. For more netiquette and high-tech business etiquette tips, you can also see our upcoming book Netiquette Essentials: New Rules for Minding Your Manners in a Digital World: Practicing Good "Netiquette" As a user of UOnet, the UO’s campuswide network, you are responsible for learning some of the basic ideas and terms related to the Internet and recognizing how to be a good "net citizen. 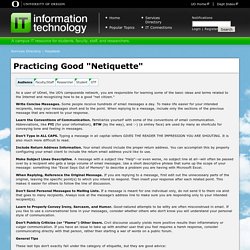 " Write Concise Messages. Some people receive hundreds of email messages a day. To make life easier for your intended recipients, keep your messages short and to the point. When replying to a message, include only the sections of the previous message that are relevant to your response. Learn the Conventions of Communication. Don't Type in ALL CAPS. Include Return Address Information. Make Subject Lines Descriptive. When Replying, Reference the Original Message. Don't Send Personal Messages to Mailing Lists. Learn to Properly Convey Irony, Sarcasm, and Humor. Don't Publicly Criticize (or "Flame") Other Users. Excerpted from Netiquette by Virginia Shea. The Core Rules of Netiquette are excerpted from the book Netiquette by Virginia Shea. 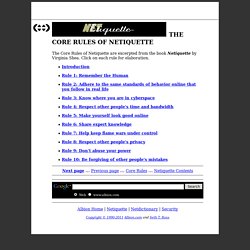 Click on each rule for elaboration. Introduction Rule 1: Remember the Human Rule 2: Adhere to the same standards of behavior online that you follow in real life Rule 3: Know where you are in cyberspace Rule 4: Respect other people's time and bandwidth Rule 5: Make yourself look good online Rule 6: Share expert knowledge Rule 7: Help keep flame wars under control Rule 8: Respect other people's privacy Rule 9: Don't abuse your power Rule 10: Be forgiving of other people's mistakes. Etiquette in technology. Online etiquette is ingrained into culture, although etiquette in technology is a fairly recent concept. 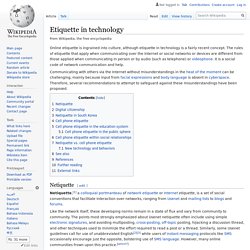 The rules of etiquette that apply when communicating over the Internet or social networks or devices are different from those applied when communicating in person or by audio (such as telephone) or videophone. It is a social code of network communication and help. Communicating with others via the Internet without misunderstandings in the heat of the moment can be challenging, mainly because input from facial expressions and body language is absent in cyberspace.

Therefore, several recommendations to attempt to safeguard against these misunderstandings have been proposed. Netiquette[edit] Netiquette,[1] a colloquial portmanteau of network etiquette or Internet etiquette, is a set of social conventions that facilitate interaction over networks, ranging from Usenet and mailing lists to blogs and forums. Digital citizenship[edit] Netiquette in South Korea[edit] Email etiquette: 9 best practices and things to avoid. This morning I was going through a working group's internal documents about best practices, procedures, etc. for coordinating communications between all of the group's members, who are scattered worldwide. 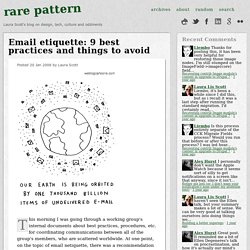 At one point, on the topic of email netiquette, there was a recommendation to follow the rules of a rather emphatic post, "How to correctly quote e-mails and news posts," which is "[p]artly written by Tom Sommer. " I think it was the "correctly" part that got me going here on this blog post. Before I go on, I would just like to explain that, as someone who routinely reads and replies to over 100 emails each day, I tend to have my own ideas of what is useful and relevant email etiquette.

And what I was reading did not fit my own ideas of best practices -- let alone "correctness. " So I did some Googling and found many, and often conflicting, recommendations on email etiquette. But we have. Some would say that we've evolved beyond email. Yes, some people don't do email. So there it is. Best Practice Netiquette. Netiquette can be described as the convention or standard for communicating online. 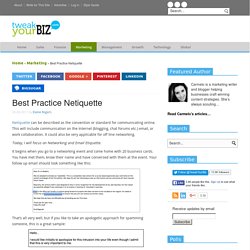 This will include communication on the Internet (blogging, chat forums etc.) email, or work collaboration. It could also be very applicable for off line networking. Today, I will focus on Networking and Email Etiquette. It begins when you go to a networking event and come home with 20 business cards. You have met them, know their name and have conversed with them at the event.

That’s all very well, but if you like to take an apologetic approach for spamming someone, this is a great sample: Or perhaps you were chatting in the car park outside afterwards, and you thought you’d let them know what a nice car they drive: Email Etiquette Tips and Proper Practices.