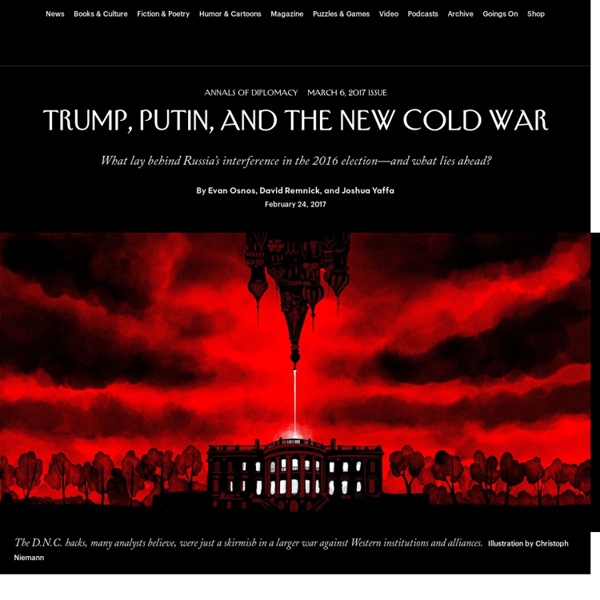 1. Soft Targets On April 12, 1982, Yuri Andropov, the chairman of the K.G.B., ordered foreign-intelligence operatives to carry out “active measures”—aktivniye meropriyatiya—against the reëlection campaign of President Ronald Reagan. Unlike classic espionage, which involves the collection of foreign secrets, active measures aim at influencing events—at undermining a rival power with forgeries, front groups, and countless other techniques honed during the Cold War. The Soviet leadership considered Reagan an implacable militarist. According to extensive notes made by Vasili Mitrokhin, a high-ranking K.G.B. officer and archivist who later defected to Great Britain, Soviet intelligence tried to infiltrate the headquarters of the Republican and Democratic National Committees, popularize the slogan “Reagan Means War! Active measures were used by both sides throughout the Cold War. Vladimir Putin, who is quick to accuse the West of hypocrisy, frequently points to this history. 2. 3. 4. 5.

“This Is the Future That Liberals Want” Is the Joke That Liberals Need In 1999, John Rocker, a beefy young relief pitcher for the Atlanta Braves, explained to Sports Illustrated why he’d never want to play baseball in New York. “Imagine having to take the [Number] 7 train to the ballpark, looking like you’re [riding through] Beirut next to some kid with purple hair next to some queer with AIDS right next to some dude who just got out of jail for the fourth time right next to some 20-year-old mom with four kids,” he said. “It’s depressing.” The tabloids raged, local politicians condemned the remarks, and Major League Baseball suspended him for the first few months of the coming season. Rocker’s comments spurred New Yorkers to do a rare thing: praise the subway, in this case, the 7 train, with its especially diverse ridership, holding it up as an emblem of city pride. A classic strategy of the school bully is to make his enemies look, in comparison, like uptight weenies.

AP FACT CHECK: Trump takes credit where it's not deserved - - March 07, 2017 WASHINGTON (AP) — The start of a new administration is never a clean slate, even when parties flip. Day One is just another day for military operations, a budget that is still in place from the old crowd and a vast array of economic, social and law enforcement initiatives left over from the last president. You would not know this from President Donald Trump. He loudly and proudly takes credit for any positive development that has bloomed since he took office Jan. 20, even when the roots and buds of it were from President Barack Obama's time. In his speech to Congress and other remarks in recent days, Trump has claimed credit for:

What should we do if the president is a liar? – Senator Bernie Sanders – Medium We face a very serious political problem in this country, and that problem is manifested in a post written yesterday by Amber Phillips of The Washington Post. In her piece, Phillips criticizes me for lowering the state of our political discourse, because I accused the president of being a “liar.” What should a United States senator, or any citizen, do if the president is a liar? Study: Religious fundamentalists and dogmatic individuals are more likely to believe fake news New research provides evidence that delusion-prone individuals, dogmatic individuals, and religious fundamentalists are more likely to believe fake news. The study, which appears in the Journal of Applied Research in Memory and Cognition, suggests that the inability to detect false information is related to a failure to be actively open-minded. The rise of online social media has led to growing concerns about the spread of unsubstantiated rumors, misleading political propaganda, and blatantly false articles designed to create viral web traffic. Even the U.S.

Fake news. It's complicated. - First Draft News This article is available also in Deutsch, Español, Français and العربية By now we’ve all agreed the term “fake news” is unhelpful, but without an alternative, we’re left awkwardly using air quotes whenever we utter the phrase. The reason we’re struggling with a replacement is because this is about more than news, it’s about the entire information ecosystem.

NASA Astronaut: Space Lessons of Scott Kelly's Year in Orbit By Scott Kelly A year ago, astronaut Scott Kelly returned to Earth after the longest time spent in orbit by an American. On his trip, with Russian cosmonaut Misha Kornienko, he executed experiments designed to examine mysteries of the human body and mind.

Plan a Protest, Lose Your House: Arizona Senate Passes SB 1142 Charging 'Provocateurs' With Racketeeing Thursday, February 23, 2017 at 11:06 a.m. The Arizona Senate passed a bill on Wednesday that would allow the government to seize the property of people who help plan a demonstration that turns violent. If the bill becomes law, prosecutors could charge people and seize assets for conspiracy to riot even if the so-called conspirators didn't participate in any violence. As Phoenix New Times columnist Stephen Lemons wrote last week, the bill comes as a right-wing response to the violence and damage at recent protests in Washington, D.C., and on the campus of the University of California, Berkeley.

Protect Your Library the Medieval Way, With Horrifying Book Curses In the Middle Ages, creating a book could take years. A scribe would bend over his copy table, illuminated only by natural light—candles were too big a risk to the books—and spend hours each day forming letters, by hand, careful never to make an error. To be a copyist, wrote one scribe, was painful: “It extinguishes the light from the eyes, it bends the back, it crushes the viscera and the ribs, it brings forth pain to the kidneys, and weariness to the whole body.”

The 1930s were humanity's darkest, bloodiest hour. Are you paying attention? Even to mention the 1930s is to evoke the period when human civilisation entered its darkest, bloodiest chapter. No case needs to be argued; just to name the decade is enough. It is a byword for mass poverty, violent extremism and the gathering storm of world war. Would 'Trumpcare,' the GOP replacement for Obamacare, allow insurance executives to 'make millions'? U.S. Sen. Tammy Baldwin greeted the Obamacare replacement bill -- she calls it "Trumpcare" -- with a sharp retort. This was the Wisconsin Democrat’s tweet on March 8, 2017, two days after the unveiling of the the House GOP bill: #ReadtheBill & you’ll see #TrumpCare would allow insurance execs to personally make millions off your health care.