5 Psychological Habits That Limit Your Ability to Think. Locate Your Negative Thought and Yank it Out! Have you ever wondered where your emotions live inside your body? 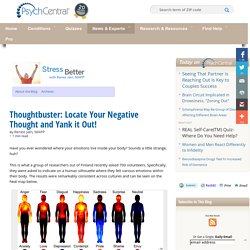 Sounds a little strange, huh? This is what a group of researchers out of Finland recently asked 700 volunteers. Specifically, they were asked to indicate on a human silhouette where they felt various emotions within their body. The results were remarkably consistent across cultures and can be seen on the heat map below. Warm colors indicate where sensations increase; cool colors indicate where sensations decrease. The study (pdf) revealed love and happiness activated feelings across the entire body, while depression muted sensations in the arms, legs and head, for example. This is a great reminder that the mind-body connection is biological. Fascinating, you might think, but what do I do with this information? 8 Questions to Get You Back on Your Own Side. The Surprising Value of Negative Thinking. 5 Things Mentally Strong People Never Say.

Self-Talk. Rumination. Self-Doubt. Limiting Beliefs. 3 Mindful Ways to Transform Negative Thoughts. How we relate to our thoughts has a big impact on how our day unfolds, and also how we approach triggers in our lives. 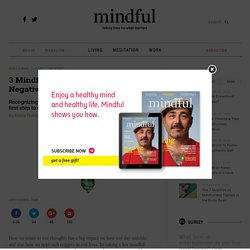 By taking a few mindful moments, we can gain some space between us and our reactions, and have some freedom from what triggers us—we don’t have to respond the same way every time. It’s a practice in breaking our habitual negative responses by first tuning in to how a thought or action makes us feel, and how it generates certain storylines in our minds. We can step back for a moment and recognize: hey, that’s not a tried and true fact—it’s just a thought. Try these three simple approaches over the weekend and see if you can work on changing your relationship certain patterns of thinking. Let your experience be your guide. 1. 2. 3. Practice these three things over and over again as an experiment. Elisha Goldstein, Ph.D. is hosting an online course to help people fully integrate mindfulness into their lives in a deep way in order to realize more enduring change. Four Steps to Freedom from Negative Thinking. A number of years ago I created a free email-based program called “Daily Now Moments.” 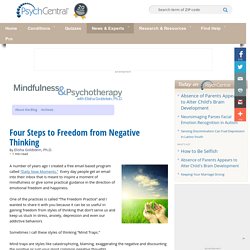 Every day people get an email into their inbox that is meant to inspire a moment of mindfulness or give some practical guidance in the direction of emotional freedom and happiness. One of the practices is called “The Freedom Practice” and I wanted to share it with you because it can be so useful in gaining freedom from styles of thinking that don’t serve us and keep us stuck in stress, anxiety, depression and even our addictive behaviors Sometimes I call these styles of thinking “Mind Traps.” Mind traps are styles like catastrophizing, blaming, exaggerating the negative and discounting the positive or just your most common negative thoughts.

The Freedom Practice When you first notice a mind trap or common negative thought, first stop, take an intentional deep breath and from this more mindful space, move through these next four steps (Name, Feel, Release, Redirect): How to Stop Obsessing Over Things You Can't Control. We’ve all heard how bad it is to ruminate — that is, to chew on something troubling, turning it over and over in your mind. 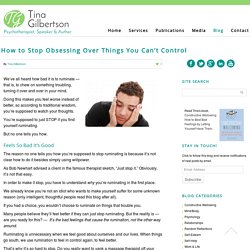 Doing this makes you feel worse instead of better, so according to traditional wisdom, you’re supposed to watch your thoughts. You’re supposed to just STOP if you find yourself ruminating. But no one tells you how. How To Get Rid of Negative Thoughts. Repressing thoughts doesn’t work so here are 8 ways to get rid of negative thoughts. 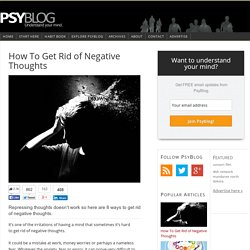 It’s one of the irritations of having a mind that sometimes it’s hard to get rid of negative thoughts. It could be a mistake at work, money worries or perhaps a nameless fear. Whatever the anxiety, fear or worry, it can prove very difficult to control. The most intuitive method to get rid of negative thoughts is trying to suppress them by pushing it out of our minds. Unfortunately, as many studies have shown, thought suppression doesn’t work. How to Stop Negative Thinking by Using Habit Releasers. Negative thinking pervades nearly every aspect of our lives. 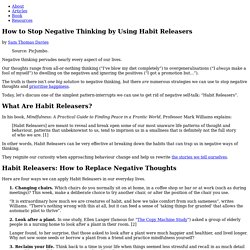 Our thoughts range from all-or-nothing thinking (“I’ve blow my diet completely”) to overgeneralisations (“I always make a fool of myself”) to dwelling on the negatives and ignoring the positives (“I got a promotion but…”). The truth is there isn’t one big solution to negative thinking, but there are numerous strategies we can use to stop negative thoughts and prioritise happiness. 7 Ways to Protect Yourself from Other People’s Negative Energy. It’s tough to live a positive life around negative people. 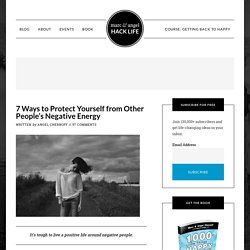 Dealing with negativity can be quite a downer. I once had a coworker whose negative energy would wash over me on a daily basis. In our conversations, she would complain endlessly about everything – work tasks, family, friends, health, and anything else she could think of. She was also extremely cynical about others, often doubting their intentions and judging them harshly. Talking to her wasn’t a pleasant experience, to say the least. The first time we had a meeting I felt completely drained. I gradually developed several key strategies for dealing with negative people effectively. 1.

Negative people who wallow in their problems and fail to focus on solutions are hard to deal with. You can avoid this drama by setting limits and distancing yourself when necessary. 2. Bottom line: when you encounter someone with a negative attitude, don’t respond by throwing insults back at them. Negative People.