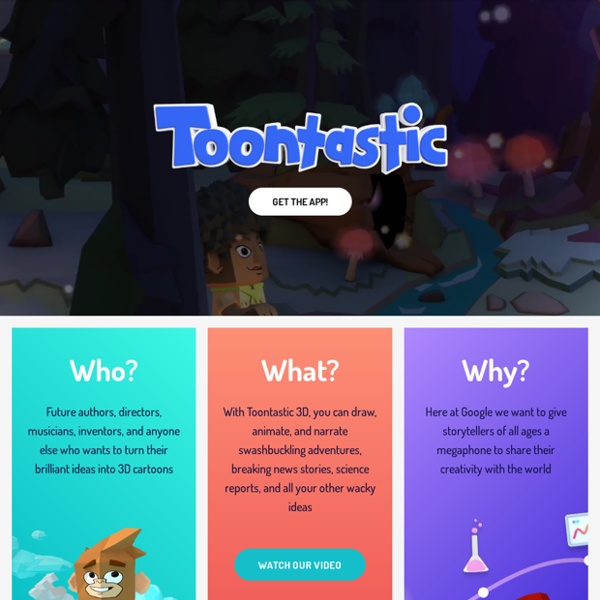 Build a box city What you need Boxes of various sizes Toilet rolls Butcher’s paper, tissue paper or just a roll of white paper (we used one from Ikea) Sticky tape Scissors Coloured paper Assorted buttons Crayons Thin masking tape or washi tape A few little cars and “villagers” Activity 1. Tape up the open boxes so they’re a bit more solid. Using Robots to Create Art: Dot and Dash Edition Lately I have been thinking about how to integrate technology and visual art in a more visual way. The A in STEAM is an equal participant and sometimes it is seen as an afterthought. So I am focusing on ways to create STEAM lessons wherein the artistic product is just as important as the process itself. I have been playing around with the idea of using robots to create artwork in the classroom.

How to Spot Visualization Lies It used to be that we’d see a poorly made graph or a data design goof, laugh it up a bit, and then carry on. At some point though — during this past year especially — it grew more difficult to distinguish a visualization snafu from bias and deliberate misinformation. Of course, lying with statistics has been a thing for a long time, but charts tend to spread far and wide these days. There’s a lot of them.

Free Paper Models of Buildings and Structures Buildings and Structures Free Paper Models Free paper models of buildings from around the world. Castles, Palaces, Churches, Museums, Historical, Houses, Lighthouses, RPG Layouts... Build your own Paper Model Medieval Castle Blarney Castle Paper Model Build a Castle - Simple. Pyramid, ziggurat and more, under the heading: The Built Environment. Cardboard Castle - Nice cardboard castle that you could make from cardstock, and templates for a gothic cathedral. He does ask in exchange for the free models, you send in a photo of the finished paper models. A Look Back: “The Fifteen Tech Tools & Non-Tech Resources I Use Most Often With My Students” In February, this blog will be celebrating its ten-year anniversary! Leading up to it, I’m re-starting a series I tried to do in the past called “A Look Back.” Each week, I’ll be re-posting a few of my favorite posts from the past ten years. You might also be interested in: A Look Back: Best Posts From 2007 To 2009 A Look Back: 2010’s Best Posts From This Blog

Three Good Tools for Collaboratively Creating Multimedia Books Collaborating to create multimedia books can be a good way to get students excited about writing stories. Students can collaborate with each other and or with you. Through the process of sharing ideas and revisions students' work improves. Writing a multimedia ebook can also be a nice way for students to illustrate and or further explain portions of fiction and non-fiction stories that they compose.

ThingLink Tutorial Learn how to use ThingLink to create, share and manage your interactive images! Navigation# When you first log in to ThingLink you’ll see several main tabs at the top of the page. This is the main way you’ll navigate through the site Search# My Five Most Frequently Recommended Google Forms Add-ons I receive a lot of emails from readers who have questions about Google Forms and G Suite in general. Many of those questions are answered with a suggested Google Form Add-on. The right Add-on can go a long way toward streamlining your process for completing common classroom tasks like keeping track of supplies or organizing classroom volunteers.

for Education Lucidpress For EducationCutting-edge technology for digital learning Get the free upgrade Propel your classroom into the digital age with captivating teaching materials and collaborative design projects. Classroom examples made with Lucidpress Parent NewslettersSyllabusesGroup ProjectsPresentationsBook Reports Schools Love Lucidpress Tutorials/Building a metropolis So you have a stack of diamonds, 15 full stacks of wood, and a huge storage room only for cobblestone, you may have even defeated the mighty Ender Dragon. Already crafted the beacon? Made a mob grinder? Have an elytra? So what do you do now?

Loopy Makes It Easy to Create Animated Simulations Loopy is a free tool for creating your own animated simulations or illustrations of a concept. This free animation tool is designed to showing relationships between two or more parts of a system. It's perfect for showing cause and effect or for showing a workflow system. Lesson plan: How to teach your students about fake news Fake news is making news, and it’s a problem. Not only did a BuzzFeed data analysis find that viral stories falsely claiming that the Pope endorsed Donald Trump and that Hillary Clinton sold weapons to terrorists receive more Facebook attention than the most popular news stories from established news outlets, but a false story about child trafficking in a Washington, D.C. pizza restaurant inspired a North Carolina man to drive 5 hours with a shotgun and other weapons to investigate. This lesson gives students media literacy skills they need to navigate the media, including how to spot fake news.