Seeing in the Dark 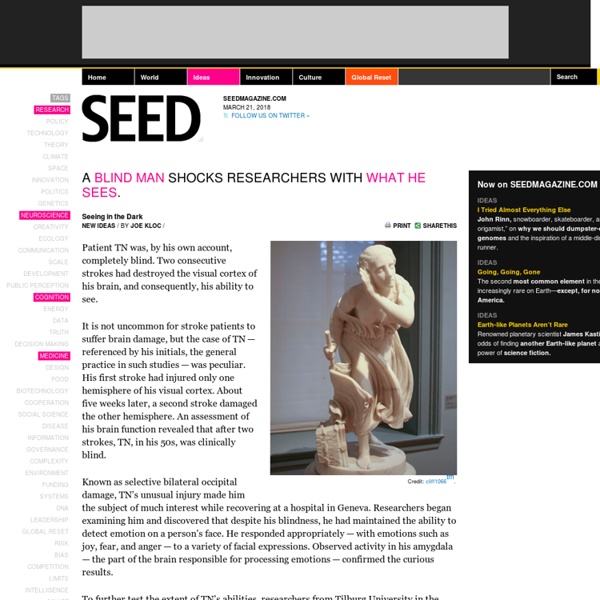 Credit: cliff1066tm. Patient TN was, by his own account, completely blind. Two consecutive strokes had destroyed the visual cortex of his brain, and consequently, his ability to see. It is not uncommon for stroke patients to suffer brain damage, but the case of TN — referenced by his initials, the general practice in such studies — was peculiar. His first stroke had injured only one hemisphere of his visual cortex. About five weeks later, a second stroke damaged the other hemisphere. Known as selective bilateral occipital damage, TN’s unusual injury made him the subject of much interest while recovering at a hospital in Geneva. To further test the extent of TN’s abilities, researchers from Tilburg University in the Netherlands devised a simple yet decisive experiment: an obstacle course. TN’s rare condition is known as blindsight. The researchers explained that TN’s success indicates that “humans can sustain sophisticated visuo-spacial skills in the absence of perceptual awareness.”

Phaistos Disc The Phaistos Disc (also spelled Phaistos Disk, Phaestos Disc) is a disk of fired clay from the Minoan palace of Phaistos on the Greek island of Crete, possibly dating to the middle or late Minoan Bronze Age (2nd millennium BC). It is about 15 cm (5.9 in) in diameter and covered on both sides with a spiral of stamped symbols. Its purpose and meaning, and even its original geographical place of manufacture, remain disputed, making it one of the most famous mysteries of archaeology. Spontaneous Human Combustion Spontaneous Human Combustion Spontaneous human combustion is the alleged burning of a person's body without a readily apparent, identifiable external source of ignition. The combustion may result in simple burns and blisters to the skin, smoking, or a complete incineration of the body. The latter is the form most often recognized as SHC. There is much speculation and controversy over SHC. It is not a proven natural occurrence, but many theories have attempted to explain SHC's existence and how it may occur.

Making Mouse Memories In the movie Eternal Sunshine of the Spotless Mind, scientists erase troubling memories from Jim Carrey’s head. In real life, scientists have done the opposite. By reactivating certain nerve cells, researchers make artificial memories pop into mice’s heads. The results, published in the March 23 Science and online March 22 in Nature, offer a deeper understanding of how the brain creates and uses memories. Much of what scientists know about how the brain remembers comes from studies that look for signs of natural memories in the brain or that disrupt memories. In the new work, memories are actually created, says neuroscientist Richard Morris of the University of Edinburgh in Scotland.

25 Beautifully Illustrated Thought-Provoking Questions 405 Flares Facebook 137 Twitter 5 Google+ 194 StumbleUpon 1 Pin It Share 68 68 405 Flares × A question that makes you think is worth asking… At the cusp of a new day, week, month, or year, most of us take a little time to reflect on our lives by looking back over the past and ahead into the future. We ponder the successes, failures and standout events that are slowly scripting our life’s story. The Benjamin Franklin Effect & You Are Not So Smart The Misconception: You do nice things for the people you like and bad things to the people you hate. The Truth: You grow to like people for whom you do nice things and hate people you harm. Benjamin Franklin knew how to deal with haters. Born in 1706 as the eighth of 17 children to a Massachusetts soap and candlestick maker, the chances Benjamin would go on to become a gentleman, scholar, scientist, statesman, musician, author, publisher and all-around general bad-ass were astronomically low, yet he did just that and more because he was a master of the game of personal politics. Like many people full of drive and intelligence born into a low station, Franklin developed strong people skills and social powers. All else denied, the analytical mind will pick apart behavior, and Franklin became adroit at human relations.

Alien hand syndrome Alien hand syndrome (AHS), is a rare neurological disorder that causes hand movement without the person being aware of what is happening or having control over the action. The afflicted person may sometimes reach for objects and manipulate them without wanting to do so, even to the point of having to use the healthy hand to restrain the alien hand.[1] Alien hand syndrome is best documented in cases where a person has had the two hemispheres of their brain surgically separated, a procedure sometimes used to relieve the symptoms of extreme cases of epilepsy.

The Book of Wishes People on our planet, ages 9 to 90, describe in their own words their most intimate wishes and dreams. The Book of Wishes © Cliff Pickover. Do not copy this document. Note: I am currently seeking to publish this book for broad public consumption with a popular publisher. I welcome suggestions for possible publisher and contact names. At the bottom of this page is a biographical sketch of Dr.

- StumbleUpon WHY DID THE CHICKEN CROSS THE ROAD? Plato: For the greater good. Karl Marx: It was a historical inevitability. Machiavelli: So that its subjects will view it with admiration, as a chicken which has the daring and courage to boldly cross the road, but also with fear, for whom among them has the strength to contend with such a paragon of avian virtue? In such a manner is the princely chicken's dominion maintained. Japanese Zen Buddhist Philosophy (Stanford Encyclopedia of Philosophy) - StumbleUpon 1. The Meaning of the Term Zen The designation of this school of the Buddha-Way as Zen, which means sitting meditation, is derived from a transliteration of the Chinese word Chán.

Voynich manuscript The Voynich manuscript is an illustrated codex hand-written in an unknown writing system. The vellum on which it is written has been carbon-dated to the early 15th century (1404–1438), and may have been composed in Northern Italy during the Italian Renaissance.[1][2] The manuscript is named after Wilfrid Voynich, a Polish book dealer who purchased it in 1912.[3] Some of the pages are missing, but about 240 remain. The text is written from left to right, and most of the pages have illustrations or diagrams. The Voynich manuscript has been studied by many professional and amateur cryptographers, including American and British codebreakers from both World War I and World War II.[4] No one has yet succeeded in deciphering the text, and it has become a famous case in the history of cryptography.

Brain Waves Surge Moments Before Death A study of seven terminally ill patients found identical surges in brain activity moments before death, providing what may be physiological evidence of "out of body" experiences reported by people who survive near-death ordeals. Doctors at George Washington University Medical Faculty Associates recorded brain activity of people dying from critical illnesses, such as cancer or heart attacks. Moments before death, the patients experienced a burst in brain wave activity, with the spikes occurring at the same time before death and at comparable intensity and duration. Writing in the October issue of the Journal of Palliative Medicine, the doctors theorize that the brain surges may be tied to widely reported near-death experiences which typically involve spiritual or religious attributes.

Visions For All Meeting the Almighty takes hallucinatory talent and training. And Hannah, a member of the Vineyard Christian Fellowship, has got it down. Per-Eric Berglund/The Image Bank/Getty Images HEARING VOICES A recent study looked at what characteristics of auditory hallucinations were shared and which differed among healthy participants and psychotic patients.