The Art of Looking: What 11 Experts Teach Us about Seeing Our Familiar City Block with New Eyes 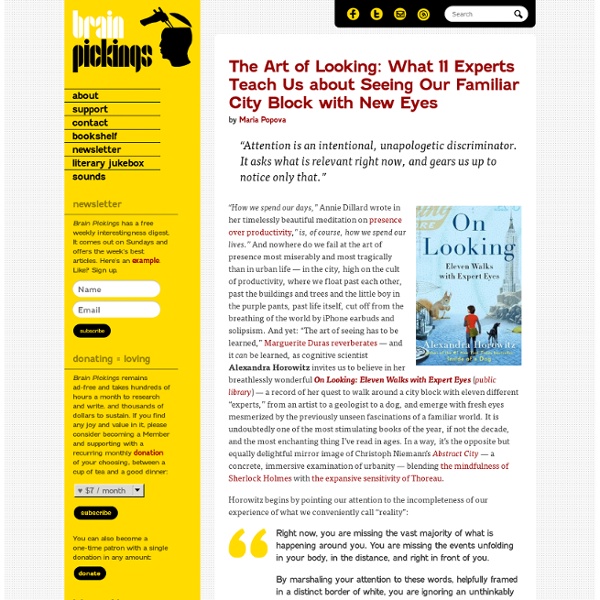 by Maria Popova “Attention is an intentional, unapologetic discriminator. It asks what is relevant right now, and gears us up to notice only that.” “How we spend our days,” Annie Dillard wrote in her timelessly beautiful meditation on presence over productivity, “is, of course, how we spend our lives.” And nowhere do we fail at the art of presence most miserably and most tragically than in urban life — in the city, high on the cult of productivity, where we float past each other, past the buildings and trees and the little boy in the purple pants, past life itself, cut off from the breathing of the world by iPhone earbuds and solipsism. Horowitz begins by pointing our attention to the incompleteness of our experience of what we conveniently call “reality”: Right now, you are missing the vast majority of what is happening around you. The book was her answer to the disconnect, an effort to “attend to that inattention.” The perceptions of infants are remarkable. Related:  Cities

Baudelaire, Benjamin and the Birth of the Flâneur | Psychogeographic Review On voit un chiffonnier qui vient, hochant la tête,Butant, et se cognant aux murs comme un poète,Et, sans prendre souci des mouchards, ses sujets,Epanche tout son coeur en glorieux projets. Charles Baudelaire: ‘Le Vin de Chiffonniers’ (‘The Ragpicker’s Wine’) Charles Baudelaire The concept of the flâneur, the casual wanderer, observer and reporter of street-life in the modern city, was first explored, at length, in the writings of Baudelaire. Baudelaire’s flâneur, an aesthete and dandy, wandered the streets and arcades of nineteenth-century Paris looking at and listening to the kaleidoscopic manifestations of the life of a modern city. The flâneur’s method and the meaning of his activities were bound together, one with the other. the city’s modernity is most particularly defined for him by the activities of the flâneur observer, whose aim is to derive ‘l’éternel du transitoire’ (‘the eternal from the transitory’) and to see the ‘poétique dans l’historique’(‘the poetic in the historic’).

David Foster Wallace on Writing, Death, and Redemption by Maria Popova “You don’t have to think very hard to realize that our dread of both relationships and loneliness … has to do with angst about death, the recognition that I’m going to die, and die very much alone, and the rest of the world is going to go merrily on without me.” On May 21, 2005 David Foster Wallace took the podium at Kenyon College and delivered the now-legendary This Is Water, one of history’s greatest commencement addresses — his timeless meditation on the meaning of life and the grueling work required in order to stay awake to the world rather than enslaved by one’s own self-consuming intellect. It included this admonition: Think of the old cliché about “the mind being an excellent servant but a terrible master.” Three years later, on September 12, 2008, Wallace murdered his own terrible master — not by firearms, but by hanging himself. The reader walks away from real art heavier than she came to it. That was his whole thing. Donating = Loving Share on Tumblr

MICHAEL WOLF PHOTOGRAPHY Are We Puppets in a Wired World? by Sue Halpern To Save Everything, Click Here: The Folly of Technological Solutionism by Evgeny Morozov PublicAffairs, 413 pp., $28.99 Hacking the Future: Privacy, Identity and Anonymity on the Web by Cole Stryker Overlook, 255 pp., $25.95 From Gutenberg to Zuckerberg: What You Really Need to Know About the Internet by John Naughton Quercus, 302 pp., $24.95 Predictive Analytics: The Power to Predict Who Will Click, Buy, Lie, or Die by Eric Siegel Wiley, 302 pp., $28.00 Big Data: A Revolution That Will Transform How We Live, Work, and Think by Viktor Mayer-Schönberger and Kenneth Cukier Eamon Dolan/Houghton Mifflin Harcourt, 242 pp., $27.00 Status Update: Celebrity, Publicity, and Branding in the Social Media Age by Alice E. Yale University Press, 368 pp., $27.50 Privacy and Big Data: The Players, Regulators and Stakeholders by Terence Craig and Mary E.

The Subway in Stockholm, Sweden Features Incredible Designs at Each Stop The subway in Stockholm, Sweden, is unlike any other metro system in the world. Although different subway systems throughout Europe tend to decoration their stops (like the Paris metro, for example), Stockholm’s metro system is seemingly dedicated to taking fantastical art deep beneath the city’s streets. The subway system has 100 stations, with each stop sporting a different design. Some show exposed rock, and others tile, but all of them have one thing in common: they are awesome. Many stations feature bright, eye-popping colors. It’s almost a shame to leave each stop. Others have statues carved into the rock walls. Almost every metro stop has a theme. And whether that theme is based in rock or tile, they are all incredible. If you’re ever stuck at a stop while using the Stockholm subway, don’t fear, because the vibrant station designs will soon give you a small case of Stockholm Syndrome. Source: visualnews.com

ALCOHOL, WITHNAIL AND GARY KING BUT BEFORE WE GO ANY FURTHER LET HULK FIRST MAKE AN ACKNOWLEDGEMENT: IT'S REALLY HARD TO SIT HERE AND SPOUT OFF SOME BANAL PLATITUDES LIKE ABOVE. IT MAKES IT SEEM LIKE HULK IS JUST PICKING THEM OFF FROM SLOGAN-IZED SELF-HELP SECTIONS OR SOMETHING. SO PLEASE UNDERSTAND THAT THESE PLATITUDES COME MORE FROM A PLACE OF... WELL... PAIN. COMING OUT OF THE INITIAL SCREENING HULK ACTUALLY HEARD A CRITIC SAY "Ugh, why did he want to go finish the pub crawl so bad? "You know I used to be sober. Radical Black Cities Occupy Wall Street has provided a dramatic reminder that cities still matter as spaces of participatory democracy and engaged citizenship. Yet while Occupy was criticized for being too white, in the United States, Blackness, once synonymous with the urban, now stands in for disappearance. The migrations from north to south, the exodus from city to suburb, and the renditions from the street to prison have all worked to undermine the idea of Black cities – and the very possibility of Black people living in cities. Gentrification and urban renewal, supported by the normalization of state-sanctioned terror against people of color through stop-and-frisk campaigns (not to mention the wholesale dragnet of the Muslim community), has acted to racially cleanse urban space. David Austin’s Fear of a Black Nation: Race, Sex, and Security in Sixties Montreal (Between the Lines) provides a good place to start. The Public Archive <editor@thepublicarchive.com> Image: David Osagie, Occupy Nigeria (2011)

Happy Birthday, Brain Pickings: 7 Things I Learned in 7 Years of Reading, Writing, and Living by Maria Popova Reflections on how to keep the center solid as you continue to evolve. UPDATE: The fine folks of Holstee have turned these seven learnings into a gorgeous letterpress poster inspired by mid-century children’s book illustration. On October 23, 2006, I sent a short email to a few friends at work — one of the four jobs I held while paying my way through college — with the subject line “brain pickings,” announcing my intention to start a weekly digest featuring five stimulating things to learn about each week, from a breakthrough in neuroscience to a timeless piece of poetry. Illustration by Maurice Sendak from 'I'll Be You and You Be Me' by Ruth Krauss, 1954. Illustration from 'Inside the Rainbow: Russian Children's Literature 1920-35.' Allow yourself the uncomfortable luxury of changing your mind. One of Maurice Sendak's vintage posters celebrating the joy of reading. Then, just for good measure, here are seven of my favorite pieces from the past seven years. Share on Tumblr

Manchester is the most linguistically diverse city in Europe | UK news | The Observer It boasts City and United, Corrie, world-renowned bands and famously inclement weather. And now Manchester has another claim to fame: the city is arguably the most ethnically diverse in Europe and, possibly, second only to New York in the world. Linguists at the University of Manchester have discovered that their city boasts a population that speaks at least 153 languages, making it one of the world's most diverse places linguistically. Research conducted by Professor Yaron Matras, of the University of Manchester's Multilingual Manchester project, suggests the true figure could be even higher. "Manchester's language diversity is higher than many countries," Matras said. With a population of half a million, Manchester is a fraction of the size of London, which has some 8 million inhabitants and also scores highly in terms of linguistic diversity. The city also attracts an increasingly large number of European citizens. But the increase has prompted concerns about assimilation.

How to Do What You Love January 2006 To do something well you have to like it. That idea is not exactly novel. We've got it down to four words: "Do what you love." But it's not enough just to tell people that. Doing what you love is complicated. The very idea is foreign to what most of us learn as kids. And it did not seem to be an accident. The world then was divided into two groups, grownups and kids. Teachers in particular all seemed to believe implicitly that work was not fun. I'm not saying we should let little kids do whatever they want. Once, when I was about 9 or 10, my father told me I could be whatever I wanted when I grew up, so long as I enjoyed it. Jobs By high school, the prospect of an actual job was on the horizon. The main reason they all acted as if they enjoyed their work was presumably the upper-middle class convention that you're supposed to. Why is it conventional to pretend to like what you do? What a recipe for alienation. The most dangerous liars can be the kids' own parents. Bounds Notes

Samba e Choro I think the cities we remember best are the ones that greet us with the utmost cruelty. I arrived in Rio after some months in Salvador de Bahia, fleeing a break-up: Europe was throwing itself into its sinister Christmas, and I thought that the summer sun of an unknown city might be a good way to dodge what was coming over me. It never stopped raining – not for a single moment – during the first week, and the city was empty. Horizontal deluges swept the desolate beach. On one of those nights, out of pure despair, I decided to go to a downtown nightclub. The taxi was leaving behind the majestic backdrop of Rio’s maritime facade. ‘My God,’ I thought, completely absorbed by my role as astronaut stranded on a hostile planet, ‘I’ll never get inside this implacable city. I don’t think I’ll ever forget my ride in that car whose destination I’d forgotten or which at least had stopped mattering to me. Of course, I ended up living there for two years. It’s no stranger to reinventing itself.